Jade Helm Week Is Here. Have You Decorated Your Bunker Yet? 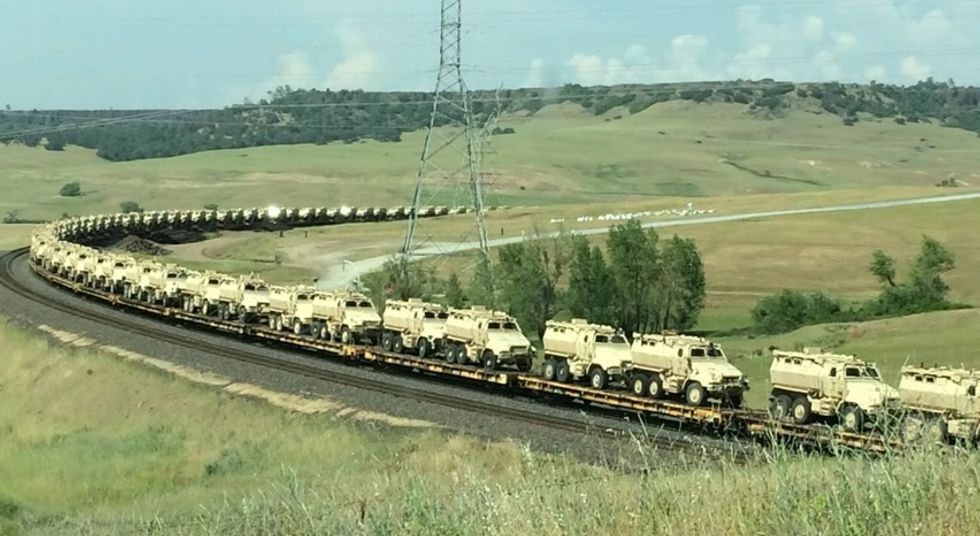 Congratulations, comrades! It has been a glorious month! Our puppets on the Supreme Court have forced through the twin abominations of Obamacare and Sodomite Marriage, and in the wake of our successful False Flag attack in Charleston, our Politically Correct allies have destroyed the last symbol of resistance to tyranny. Now, while the nation is distracted by the insane ramblings of a crazy man with a tribble on his head, the hour has come for Our Glorious Leader Barack Obama to declare martial law across the southwest, and to start rounding up the guns and the patriots! Jade Helm 15 is finally here! Remember, don't start the rioting until you hear the code words on the TV: "Rapid Advance, They Helped My Business Grow, Rapid Advance, They Didn't Say No." Then head to your nearest Walmart and start yelling whatever slogans come to mind. And remember to say a friendly "Ni hao!" to our Chinese comrades as they come flooding out of the subterranean tunnels, which are the best kind. Even if our Glorious Leader doesn't announce his plan to bend America to his will this time, there will no doubt be some hilarious videos of idiots yelling at Army dudes.

But beware -- the patriots are watching! The Houston Chronicle warns that the Army's "training exercise" (hah! That one never gets old) will be monitoring Jade Helm 15 on the internet, which will somehow remain functioning even when the shit hits the fan, because Obama is crafty that way. A website called "Counter Jade Helm" has been slapped together so that patriots can keep track of government troop movements, and it's got all sorts of cool resources, like a place for citizens to report all the suspicious stuff they see in their area. If there's a bustle in your hedgerow, or you see a suspicious number of Subaru Outbacks that you suspect may be carrying lesbian terrorists, make sure you report it there! There's also a handy dandy guide to American military vehicles, in microscopic side views that are literally the size of a thumbnail, so you can get eyestrain trying to distinguish between various versions of the MRAP armored vehicle. And no, clicking on the pictures will not enlarge them, probably to enhance Operational Security, or "OPSex" as we patriot militia types call it. You can tell that they've worked a lot on the website, since the homepage includes a line of boilerplate web theme nonsense that came pre-loaded on the page (click to embiggen):

The objective is not to stop or countermand the military's training, but to practice our own skills. Anyone can participate. Groups within each state that will play host to the military are being established to streamline the process. Individuals not wishing to be affiliated with a group can also submit information to this website for analysis and publishing.>Vermilion adopts a business or commercial centric visual model, with corporate background shades interwoven with configurable, vibrant or brand colors, allowing for an equilibrium between professionalism and artistic allure. [Emphasis added]

It's not often that you see such a smooth integration of wingnut militia jargon and forward-looking design sense.

Eric Johnston of Kerrville, Texas, explained to the Houston Chronicle how the Counter Jade Helm patriots will provide sitreps on the military's maneuvers:

And then they'll provide some informative maps, like these, which actually just point to positions on Google Maps but provide nothing more than the name of the place on the map, so you can draw your own conclusions. If you want to know where San Antonio is, just click on the red arrow, which tells you that it is a confirmed location. And by god, it is right where San Antonio is!

Not that the Texan watchers are paranoid or anything -- they don't really think martial law is going to be declared, probably, but they do "feel like they can't trust the government, and want to make sure the Military isn't under orders to pull anything funny."

The group is under strict voluntary orders not to wear camouflage, so they won't look like paranoid crazies, and while most of the volunteers have concealed carry permits, they'll be unarmed while watching the military.

One of Johnston's men, a licensed pilot, even plans on making surveillance flights with his personal aircraft.

The national effort is being coordinated by "44-year-old former Marine Pete Lanteri, a New Yorker living in Arizona with plenty of experience on civilian border patrols." He runs the website and will coordinate the reams of "intelligence" that's sure to come flowing in from brave volunteers. He also is very serious that he is not a crank:

[The] organizers insist the radically conspiracy-minded have been filtered from the surveillance volunteers, and no one among their group fears the imminent opening of concentration camps. Lanteri said he struggles to keep that bloc off his Facebook page.

"Once I saw the freaking nut-jobs coming out of the woodwork I was spending half my day discrediting what they were posting," he said. "No nut-jobs will be put in the field."

We feel so much better knowing that only sober, professional paranoids will be monitoring the operations. The Chronicle reports that both Lanteri and Johnston figure the military is "up to something," even though they're not sure what. Says Johnston, even though he doubts Obama will seize power in the coming weeks, he's "got a gut feeling" that something big is going down. And that's why he's vigilant. A profile of Johnston in The Guardian makes it clear that nothing gets past him:

If something mysterious is afoot, Johnston, said, he wants to get to the bottom of it.

Despite his apparent lack of faith in basic math, Yr Wonkette has no doubt he'll find out what's really going on, especially when he joins forces with some plucky teenagers and a dog who travel the country in their van, solving mysteries. We bet there's no government conspiracy at all -- just an old real estate developer who wants to buy up the creepy old house for a bargain price!