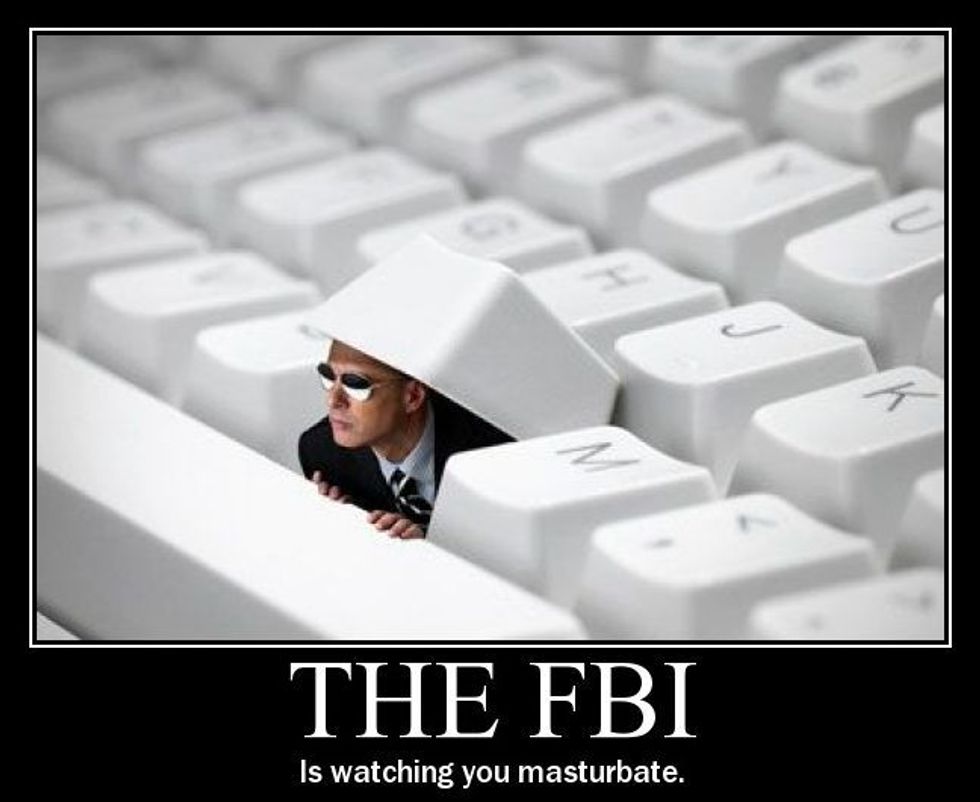 You all know what James Comey looks like anyway.

So, don't read anything into this, folks, but in an interesting bit of completely coincidental timing, it turns out that just a few days before he was shitcanned by Donald Trump, former FBI director James Comey asked Deputy Attorney General Rod Rosenstein to approve "a significant increase in resources for the bureau’s investigation into Russia’s interference in the presidential election," according to three anonymous "congressional officials" who spoke to the New York Times. By pure coincidence, Rob Rosenstein wrote up that excellent letter about how mean Comey was to Hillary Clinton, which simply was the last straw in deciding Donald Trump to fire Comey, although as we learned in Wednesday's White House briefing, Trump had actually lost confidence in Comey from Day One.

Although Comey briefed several members of Congress about the request to fund an expanded investigation, Justice Department spokesperson Sarah Isgur Flores was quite certain Comey made no such request, because as everyone knows, Russia is a ruse:

[Flores] said “the idea that he asked for more funding” for the Russia investigation was “totally false.” She did not elaborate.

“Totally false,” said Ian Prior. Comey “never made the request for more resources and money for the Russia investigations.”

Strangely, the LA Times also found a congressional staffer who said, yes, Comey had requested "significant increase in resources." Weird thing to say about a request that never happened! If you can't trust two Trump administration spokespeople, who can you trust? Maybe a used car salesperson, a late-night TV infomercial, or anyone on "Fox & Friends."

According to Politico, the briefing "included Senate Intelligence Committee leaders Richard Burr and Mark Warner along with Comey[.]" In the briefing, Comey

told the senators that the inquiry had been effectively stalled due to a lack of access to prosecutors and because there was no one at the Justice Department to guide the probe forward.

The Failing New York Times says when Comey briefed the members of Congress about the request that he obviously never made, he said he'd become frustrated by the resources the FBI had been given to pursue the investigation. The officials who spoke to the Times said he had requested the additional funding to "accelerate the investigation," and had assumed Rosenstein would support his efforts. The story says it's not clear whether Rosenstein responded to Comey's request positively, negatively, or with a mumbled excuse about having to wash his hair, and it's also unclear whether the White House knew of it.

The Times was also very careful to note:

The timing of Mr. Comey’s request is not clear-cut evidence that his firing was related to the Russia investigation. But it is certain to fuel bipartisan criticism that President Trump appeared to be meddling in an investigation that had the potential to damage his presidency.

Yeah, we guess it might fuel criticism, at that. Or at the very least result in some angry Tweets from the president, who'll insist that since the DOJ denies such a request occurred, the Times made up its sources like it always does.

The Washington Post asked California Senator Dianne Feinstein, ranking Democrat on the Judiciary Committee, if she'd been briefed on the matter by Comey, and she was completely "can't tell you or I'd have to kill you" in reply: "I was not. But I understand that there have been additional requests. That's all I can say."

Huh! The FBI isn't saying anything, and just because several news outlets found sources in Congress who confirmed Comey briefed them about his request, we're going to withhold judgment on this story, since after all as Democrats we're dancing in the streets over Comey's firing, just like Trump said we would be.

Nahhh, we wouldn't trust a Trump spokespeople as far as we could throw them, and we were the worst fielder in Little League. Let the leaks begin!

Yr Wonkette is always asking for more money, because we're supported by reader donations. And you have yet to fire us, which we really appreciate a lot! Click that there "Donate" linky below!