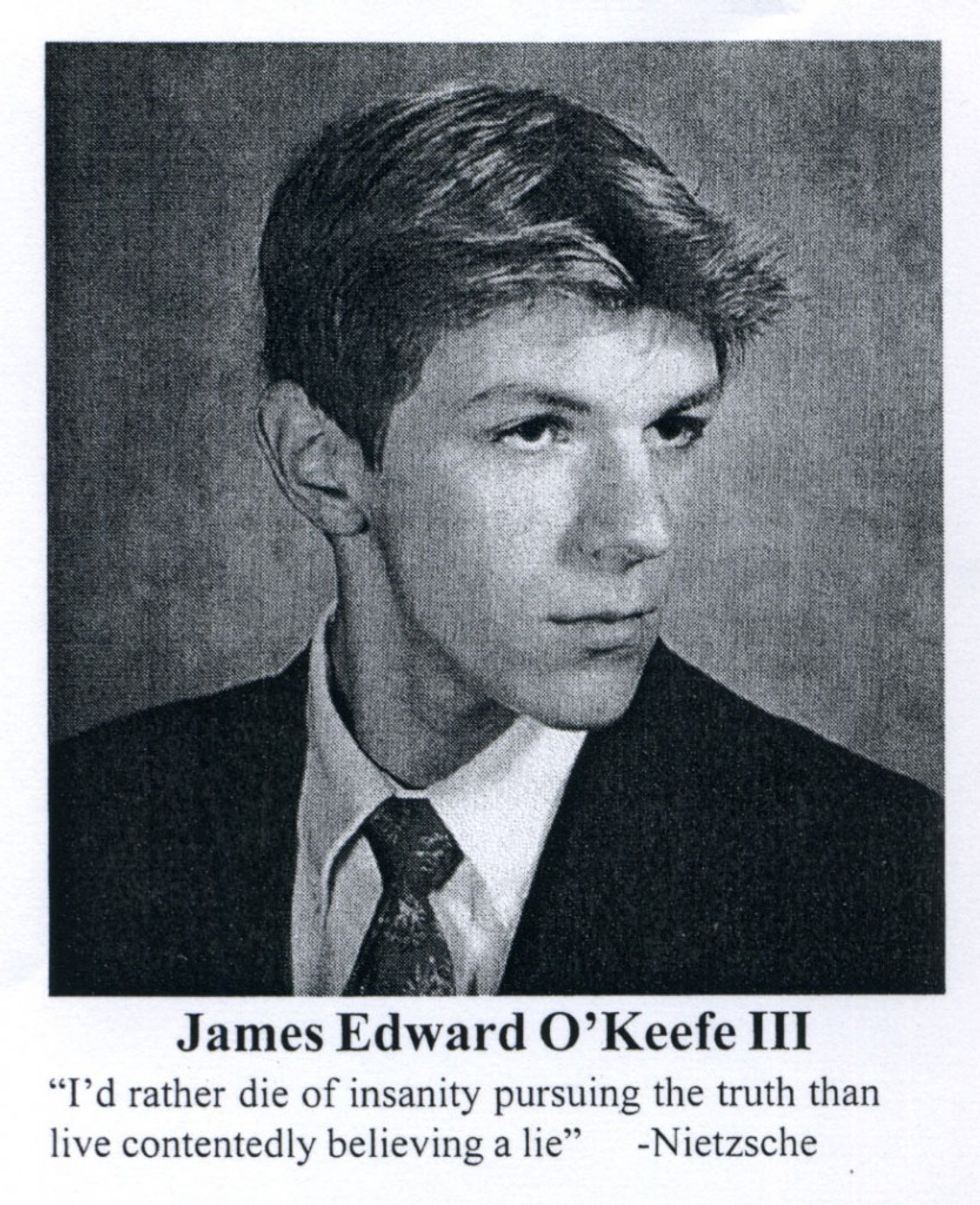 Yesterday,as first reported by your Wonkette (<--COPY LINK HERE, LA TIMES), the world rejoiced upon news that the insufferable date-rapey Dennis the Menace clone known as James O'Keefe III had settled his lawsuit with a former ACORN employee to the tune of $100,000 plus one weak ass nonpology. Twitter erupted in a sea of Nelson Muntz laughs at O'Keefe's expense, and a few former recipients of ACORN assistance (like this person) were able to take an ounce of solace in justice being served against the person who unfairly brought down a truly beneficial organization.

But what about the real victim here: James O'Keefe? How is he dealing with his tarnished "reputation," the prospect of being out six figures, and living as just another used-up old con with arthritis in both hands (he probably couldn't even get a library card if he applied). Well don't fret people, if this statement from O'Keffe's Project Veritas Clubhouse is of any indication ol' James isn't about to start carving his name into the rafters anytime soon.

There comes a time when the cost to defend yourself against meritless accusations becomes so burdensome financially and personally, it is simply too great. The settlement admits no liability and there is no benefit from extending this ridiculous lawsuit.

Yes being the defendant in a civil suit is not exactly as fun and beneficial as appearing on Fox News or getting your lap dances paid for with Breitbart's black card. But why roll over and let a criminal enterprise like ACORN unfairly steal a massive amount of cash from you if their claims were baseless, James?

Sadly, this is the cost of exposing the truth. That’s why so few people do it. There are liability issues inherent in undercover journalism. But let me be clear, this lawsuit had nothing to do with editing or misrepresentation.

Really James? Juan Carlos Vera sued the shit out of you and Hannah Giles just because he did not want his beautiful visage displayed on Youtube -- and not because your ridiculously transparent hack edits made Vera and his place of work look like a den of a sex slavery? Him, the guy who called the cops to report you as a sex trafficker, and then was made -- by you! -- to look like one himself?

Not to impinge on the character of a person who tried to wiretap a US Senator's office in a failed attempt to stop universal healthcare legislation, but that assertion seems to be completely full of shit.

It was an action under the California Invasion of Privacy Act. The anti-recording statute under which the suit was brought is unconstitutional, overbroad, and gives the police and other public officials too much power.

HOW COULD WE HAVE BEEN SO BLIND?!! James O'Keefe is not just some sniveling tool of a well-funded and fanatical group of ideologically driven cowards. He's a fucking civil rights martyr bravely fighting on the front lines of California's war on journalisms through daring to extend common law privacy torts into the 1980's. Specifically banning the use of state of the art "video camera" technology when painting individuals in a false light for monetary gain is exactly the sort of tyrannical government that the founders warned us about. HOW DARE Vera's lawyers insist on the enforcement of a law that has been on the books since 1994. Perhaps O'Keefe should have his lawyers try and have the statute declared unconstitutional given the egregiousness of this injustice.

Oh wait O'Keefe already did tried that dumbass defense in 2011 and got summarily pimp-slapped (see what we did there???) by the Federal District court in the process (791 F.Supp.2d 959):

[C]learly it is not a violation of § 632 for the mere audio or video recording of an event or interaction. Instead, there must also be “an objectively reasonable expectation that the conversation is not being overheard or recorded.”.....By providing an objective reasonableness standard regarding confidential communications, § 632 is not overbroad and does not run afoul of the First Amendment.

Judge James Lorenz in dismissing O'Keefe's worthless attempt at a motion to dismiss even found a tidy little paragraph from an earlier case that bests expresses how pissed off he was in having to waste his time on this little shit:

[N]o constitutional precedent or principle of which we are aware gives a reporter general license to intrude in an objectively offensive manner into private places, conversations or matters merely because the reporter thinks he or she may thereby find something that will warrant publication or broadcast.... In short, the state may not intrude into the proper sphere of the news media to dictate what they should publish and broadcast, but neither may the media play tyrant to the people by unlawfully spying on them in the name of newsgathering.

So James is employing the common defense mechanism of wrapping himself up in an idiotic interpretation of the Constitution to disguise his blatant douchebagerry. Big deal. What is he going to do now that his greatest "accomplishment" in life has been so throughly discredited as a sack of lies?

As President of Project Veritas and undertaking 5 current investigations, my time and resources are better served in working toward our mission of exposing waste, fraud, and abuse then defending myself against lies. I will not be deterred from investigating and exposing corruption. Now more than ever, America is in need of a more ethical and transparent society.”

Never-heard before details surrounding this case and much more will be revealed in a book by James O'Keefe to be released in June 2013.

Grifters never stop griftin'. At least someone seems to have found a way to buck the trend and make a living in this upside down world of journalism. Unfortunately being a sociopath seems to be a prerequisite.