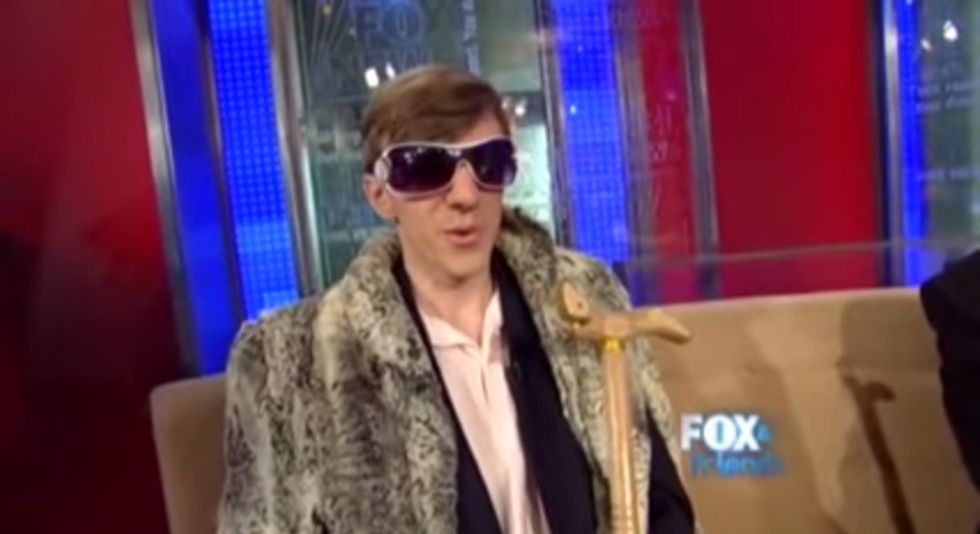 It's a classic look

Looks like investigative poo-thrower James O'Keefe and his merry band of news fakers have stepped on their own dicks once again, this time in an aborted attempt to infiltrate that dangerous nexus of radicalism the League of Conservation Voters (LCV -- which only looks like a Roman number). The New Yorker's Jane Mayer reports the LCV has filed a complaint with California's Department of Justice after the group figured out that three new "volunteers" who were very eager to talk about all sorts of very leftish ideas were actually infiltrators, two of whom had previously worked with O'Keefe. It's not clear what the Gang That Couldn't Spy Straight was trying to prove with their bumbling "investigation," but we can at least feel relieved Donald Trump hasn't hired O'Keefe to run covert ops at the CIA.

In a six-page letter of complaint sent to the California Department of Justice on Friday, the League of Conservation Voters, or L.C.V., asked the state’s attorney general, Xavier Becerra, to open a criminal investigation into the operatives for potential fraud, racketeering, unfair business practices, trespassing, invasion of privacy, and possible violation of the state’s two-way-consent eavesdropping laws.

With James O'Keefe's botched attempt to infiltrate George Soros's Open Society Foundations, we learn (again) just what a shoddy amateur spy he is.

O'Keefe, needless to say, wouldn't tell Mayer about whether the three were connected with his "Project Veritas" (Latin for "Truth Pulled Out Of My Ass"), saying only, "I don’t comment on investigations real or imagined, or work with mainstream reporters who operate in bad faith." He only works with amateur "reporters" who operate in bad faith, just like him. Mayer, clearly amused, reminds us she wrote about O'Keefe's brilliant self-sting last year, when an "investigation" of George Soros fell apart thanks to O'Keefe's failure to hang up his own phone.

While LCV isn't sure whether the infiltrators -- Christian Hartsock, Daniel Sandini, and Ann Vandersteel -- were working for Project Vermin or doing their own copycat work, the complaint notes that Hartcock and Sandini have worked with O'Keefe previously; Mayer adds they also have connections to Steve Bannon, and both were credited in Bannon's 2012 agitprop movie Occupy Unmasked. (Depressing thought: a Steve Bannon film festival...) Vandersteel works with a cheesy rightwing outfit called "YourVoice America," and is a big fan of the #Pizzagate conspiracy theory. If this was an O'Keefe joint, he clearly had the usual team of crack investigators.

LCV chair Carol Browner, a former EPA director and Obama administration official, said the infiltrators had at least the basics of a sophisticated scam going. They posed as frontmen for big-money donors who wanted to save the environment, and offered fake business cards, Facebook and LinkedIn accounts, and the story that Donald Trump's election had motivated the donors to act, so could they please meet lots of big-time activists and people in government, please? Their fake Facebook pages had exactly what you'd expect for liberal activists, like pictures of Hillary Clinton and Bernie Sanders, lots of "#Resist" hashtags, and of course a "like" for Saul Alinsky's Rules for Radicals, which was probably one of the tip-offs that these guys were fake. Nobody but rightwing loons like O'Keefe goes around quoting Alinsky like gospel. We go for The Big Lebowski, man.

Then there was the brilliant spycraft:

The L.C.V. staff found some of Sandini’s behavior bizarre. At one L.C.V. event, he seemed inexplicably disappointed when he wasn’t able to present a pair of cufflinks to the California Senate’s president pro tempore, Kevin de León, after de León failed to show. The staff also noticed that he had a habit of leaving his cufflinks, and his phone, on tables during get-togethers, which, according to L.C.V.’s letter, “raises the possibility that we have been recorded without consent. We are deeply concerned that if surreptitious, unauthorized videos or recordings were made, these individuals could make deceptive edits to create unfair, malicious, and false impressions.”

You know how it is -- you just accidentally leave your Hi-Tech Spy Cufflinks or your phone sitting around whenever there's a meeting. Browner said Sandini's behavior gave her "the heebie-jeebies," and that she had told colleagues so at the time. You don't get a lot of heebie-jeebies these days, and we love Browner for it (and also for actually using the EPA to protect the environment). Sandini was a bit less than subtle:

“He stood too close, and he seemed to both know too much and too little,” she recalled. He was strangely knowledgeable about her husband’s career, and kept pushing Browner to respond to heavy-handed left-wing statements, while urging her to set up a voting drive in Florida.

Sandini eventually introduced Browner to the third operative, "Ann Steel" (how DO they come up with these aliases?!), who claimed to be a "wealthy oil baron's widow" and also set off Browner's bullshit detectors. LCV started looking more closely at the three, and noticed their Facebook accounts had all been created fairly recently, and that their "friends" included a surprising number of folks from Southeast Asia, suggesting they'd been purchased in bulk. (Cue that great spy song, "Secret Asian Man.") Eventually, LCV figured out their new pals' real identities and hired a lawyer to file the criminal complaint with the California DOJ.

And now we'll see what lame-ass footage O'Keefe throws together, if he was connected to these doofuses. And since California takes its two-way consent for recording seriously, we're hoping to learn more about those super-secret Spy Cufflinks. These are clearly the most sophisticated agents since that one time Jared Kushner asked Russia for his own shoe phone.

Yr Wonkette is supported by reader donations. Please click the "Donate" clicky, then speak clearly into your shot glass.