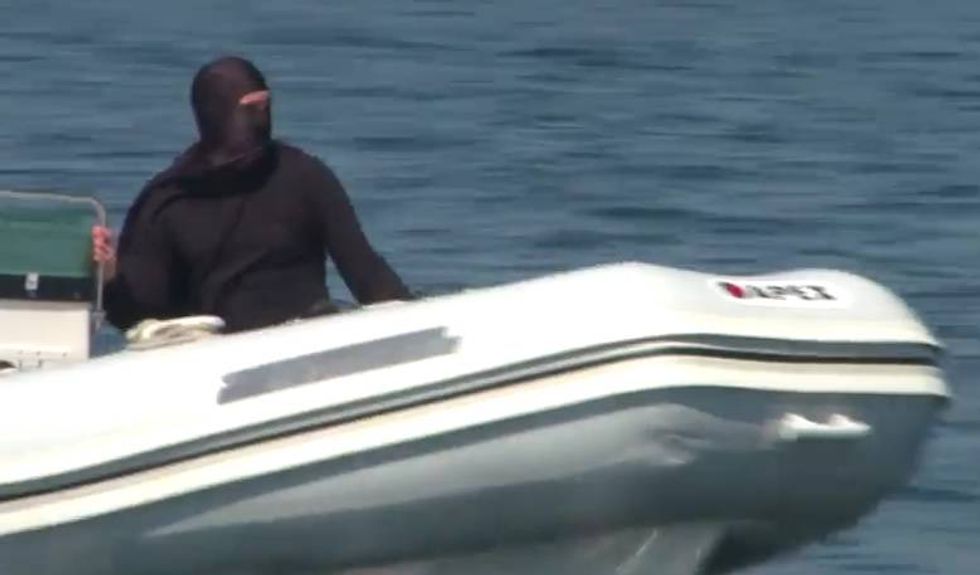 OMG you guys, we are SO SCREWED! After proving that anasshole in an Osama bin Laden mask can cross the Rio Grande, brilliant rightwing documentarian James O'Keefe has once again proven that Barack Hussein Obama wants us all to be killed by terrorists! In his latest exposé, O'Keefe shows just how vulnerable we are to attack! In this shocking video, an actor with a British accent, a rented ninja costume (we assume -- in the interest of journalistic responsibility, we must note that O'Keefe did not explain the provenance of the black outfit), and plastic bags with "ebola" and "ricin" written on them is able to ride across Lake Erie in a boat, enter Cleveland in broad daylight, and walk right into the Rock n Roll Hall of Fame "on the eve of the 9/11 anniversary," and nobody challenged him at all! Therefore, we are all at risk! PLEASE TO PANIC NOW, EVERYONE.

We are astonished, although if O'Keefe REALLY wants to test American security, we'd like to see him try bringing in an actual terrorist, not just some schmuck in a Ninja suit -- and for extra verisimilitude, he should film the whole process, starting in Syria or Yemen. The young man just isn't setting any real challenges for himself.

And just think, if he and his film crew ended up being blown to bits by a Hellfire missile, that would be some awesome footage, not to mention reassuring proof that intelligence agencies are both competent and have a really sick sense of humor.