James O'Keefe’s Traitorous Former Collaborators Betray Each Other, Like A Bunch Of Traitors 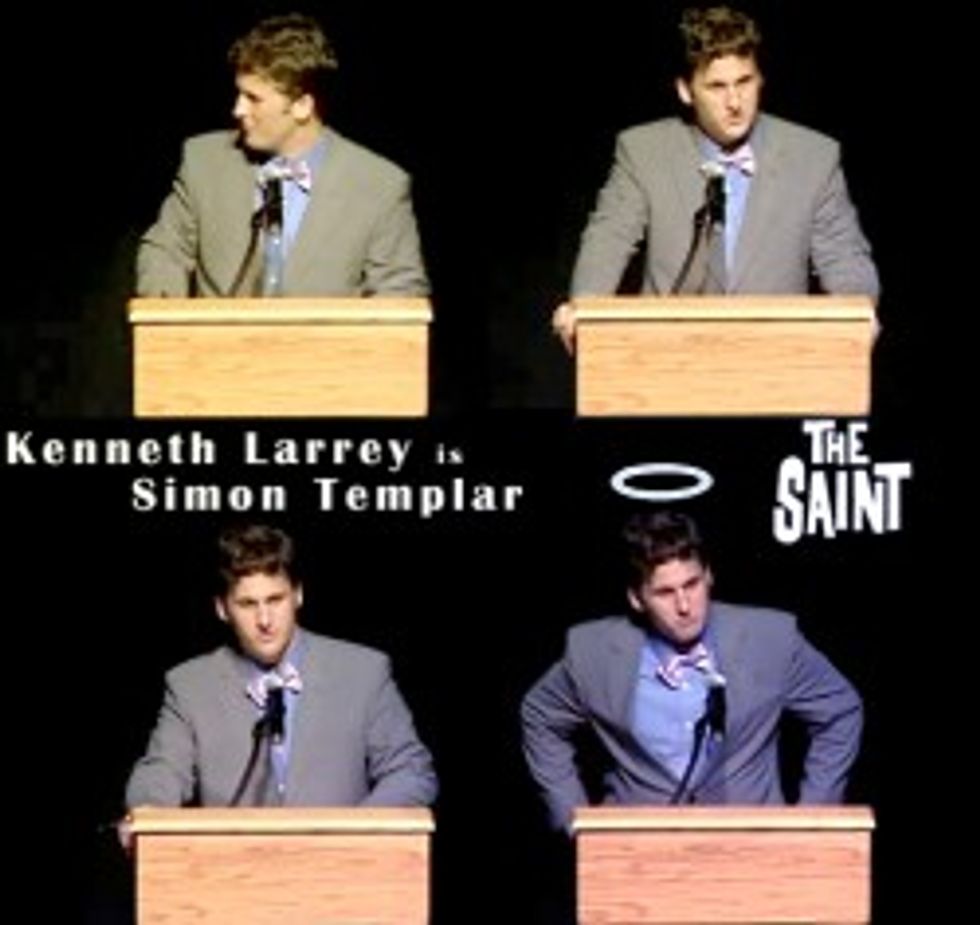 O’Keefe, of unlawful imprisonment and intimated he drugged and tried to rape her in his parents' barn — has joined forces with convicted bomber and librul Brett Kimberlin to publish a massive stockpile of O’Keefe’s emails.

While JOK hasn’t been remotely fazed by the first salvo in their merged vendetta, already there has been major collateral damage. The first wave of published emails partially exposed the identity of James O’Keefe’s turncoat NPR sting collaborator, who had been operating under the pseudonym Simon Templar, but whom everyone will now know by

Your trustworthy Wonkettes can guarantee this is true, because we figured it out and brought it up with Ken Larrey months ago, over the phone. Don’t hate us for keeping it secret! Selfish jerk Ken Vogel at Politico has been hiding this scoop from you for even longer! So has hack pundit emeritus Howard Kurtz! Hate those guys!

This whole sordid episode feels like one of those big crossover comic book events where (say) evil Red Hulk and Catwoman team up to go after Zangief from Street Fighter — by which we mean it feels incredibly convoluted, plus silly, and of interest only to total nerd-weenises. But isn’t that what you are? Political Schadenfreude Nerd-Weenises, who have already clicked the “Read More” about this? Let’s get started, then.

Brett Kimberlin, you may recall, is a former drug dealer and accomplished musician, whose 1978 bombing spree in Speedway, Indiana wasn’t even political, just fucking weird. He has since transformed himself into an influential progressive activist and lawyer, becoming this election cycle’s Bill Ayers thanks to unproven allegations that he prank called 911 to initiate SWAT team raids on the homes of two conservative bloggers. (Today’s with-it Reagan Youths call this practice SWATting. It’s short for “Special Weapons and Tactics”-ing.)

Prior to her falling out with O’Keefe, Nadia Naffe had played a role in several of his aborted undercover-video nasties. She’s spoken candidly about her involvement in schemes to shame Congresswoman Maxine Waters and, over a year later, NYU journalism professor Charles Seife and the Occupy movement. Your Wonkettes have personally dug up emails implicating Naffe in still more of JOK’s lost stings, including an attempt to target Boston-area ACORN employees during the 2010 Brown v. Coakley Senate race. The plan involved Nadia and other minority actors soliciting advice on “who to vote for” from ACORN employees, and you may not believe this, but James O’Keefe intended to secretly record it all.

So now, Naffe has provided all of her Project Veritas-related emails to the Velvet Revolution: an electronic voting reform supergroup, co-founded by Brett Kimberlin and Brad Blog Blogger Brad Friedman. In collaboration with the group Occupy for Accountibility (OFA), the Velvet Revolution (Why are you still laughing at their name?) say they will be “breaking stories, here and in other publications, based on these documents as they relate to matters in the public interest.”

If their first story is any indication, though, they either don’t have much or are planning an epically slow roll. The groups have started by publishing documents of a plot, instigated by Ken Larrey, to covertly infiltrate Reverend Jeremiah Wright’s Trinity United Church for the purpose of goading him and others into saying nice things about Marxist revolution. As with the NPR videos, the plan was to offer donations in exchange for something, this time the church’s role in a Glorious People’s Revolt, thus exposing Trinity United’s viciously literal reading of Christianity and the leftist core of its famous former congregant: one Barry Hussein “Red Diaper Baby” Obama, President of America.

So, as a sting plan, we can politely say that it is very creative. The prop list of costume jewelry for the Canadian Marxist Banker characters Ken Larrey and his NPR video partner Shaughn Adeleye were planning to wear is especially wonderful. “Flashy gold watches.” A single “magnetic gold earring (Bill Ayers Style).” As the subject of an expose, we are sorry to report that this two-year-old, abandoned, hidden camera prank relates only tangentially to the public interest.

It feels like a genuine shame that this mediocre scoop is going to cause such a deep rift in the tiny coalition of conscientious defectors from James O’Keefe’s Project Veritas. Naffe had hoped to leak this material anonymously — OFA redacted her name from the emails and described her solely as “a whistleblower”—however, they kept in so much context about the Maxine Waters sting as to make her role in the leak fairly obvious.

Even if they’d done a better job, a warily proud Ken Larrey contacted us almost immediately after reading their post to explain Nadia’s role. When we asked if he was concerned about the exposure, Larrey typed, “not especially yet, I was actually quite fond of that plan lol.”

Though now that he’s being mercilesslymocked on Twitter as we speak, by the small clique of Occupiers who have resorted to bullying as means of confirming his secret identity, Larrey says he “Probably should be.” In a gchat conversation with us yesterday, Larrey (maybe jokingly?) expressed his fear that he, or his parents, may become victims of a genuine SWATting! “Technically that's probably the worst that could happen, [but] I wouldn't expect them to do it to me. I'm not blogging about Kimberlin.”

Pity poor Ken Larrey, an electrical engineer from Houston, who really just wants to be left alone to occasionally write for BigGovernment.com, retweet photos of Dana Loesch’s new pink heels, and maybe, one day, mastermind a big undercover sting all his own. We could blame Naffe, or OFA, but we know who’s really to blame: Stupid gloryhogging James O’Keefe for generally being bad with women and taking credit for Ken Larrey’s hard work!

Ken Larrey built that MEAC website all by himself! It was Ken Larrey who grew a beard and dyed his hair to pose as a scary Muslim for the NPR videos — just like Simon Templar, the superspy Roger Moore played on TV’s The Saint! As he told us back in February, Ken Larrey even dropped out of a college course that conflicted with the (expensive, self-funded) trips he made up to D.C. to meet with NPR executives Ron Schiller and Betsey Liley!

Ken Larrey did all this AND he came out publicly and let us all know that he and Adeleye wanted to do a larger, less partisan version of this Muslim Brotherhood sting, only to have James O’Keefe hijack it as a rightwing crusade against NPR!!!