Jan Brewer Is Just Like, Really Hurt That You Keep Calling Her And Trump Racists And Bigots 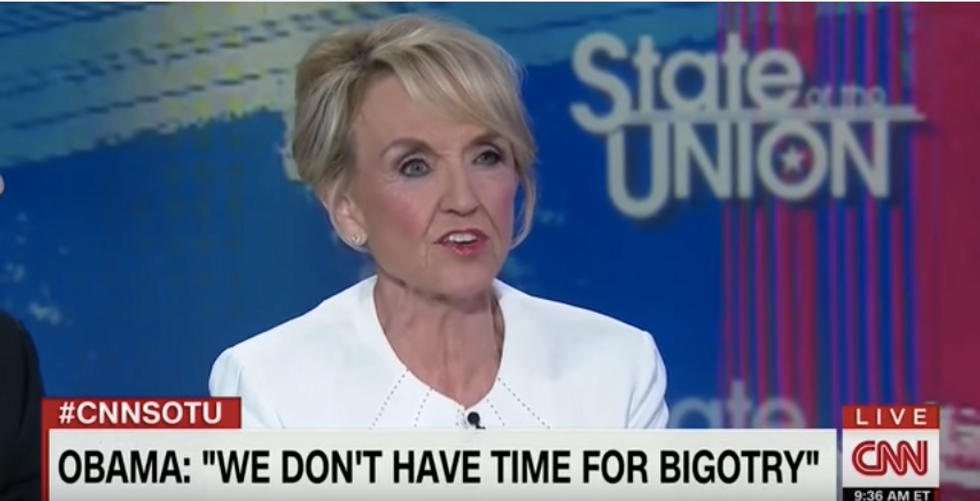 Former Arizona governor Jan Brewer had a bit of a meltdown yesterday on CNN over how mean it is of President Barack Obama to say that she and other Trump supporters are racist and bigoted, during a fundraiser for Gov. Jay Inslee (D-WA) where he actually just said that Donald Trump himself was a bigot.

In response, Brewer stated, "Obama just always comes tearing after Republicans constantly, calling names and calling people bigots and racists. And that’s their big comeback, you know. And it’s absolutely ridiculous. To see a president speak like that is offensive."

Clearly, Brewer is looking forward to a day when our US president is much classier and says non-offensive things like probably calling Angela Merkel a bimbo and accusing all people of whatever religion or ethnicity of being out to get us.

Fellow guest Martin O'Malley pointed out that Obama did not say that all Republicans were racist and bigoted, just that Donald Trump is. Which is a true fact! But Brewer stuck to her guns and continued to insist that "racist and bigot" are just terms liberals throw out willy-nilly, for no reason whatsoever, just to hurt the feelings of nice Republicans who respectfully disagree with them.

Host Jake Tapper asked Brewer if she thought that perhaps -- just perhaps -- she would consider some of the things Donald Trump has said "to be at the very least racially tinged or offensive on a racial level.” She then explained that while he has said some things that she herself was not comfortable with, this should be excused because he's "new to the political arena."

This doesn't actually seem like that good of an excuse! Because it seems like the vast majority of Americans are not running for office, and have never run for office, and yet somehow a good chunk of us don't go around suggesting that Mexican immigrants are all rapists, or that "virtually 100% of mosques preach hate against America." Most of us do not have to run for office to figure out that those are bad things to say.

Brewer went on: “But dang it, I get fed up that we hear over and over and over and over again from the president of the United States that every time somebody wants to support on the Constitution and the rule of law that we are out there because we are racist and bigots.”