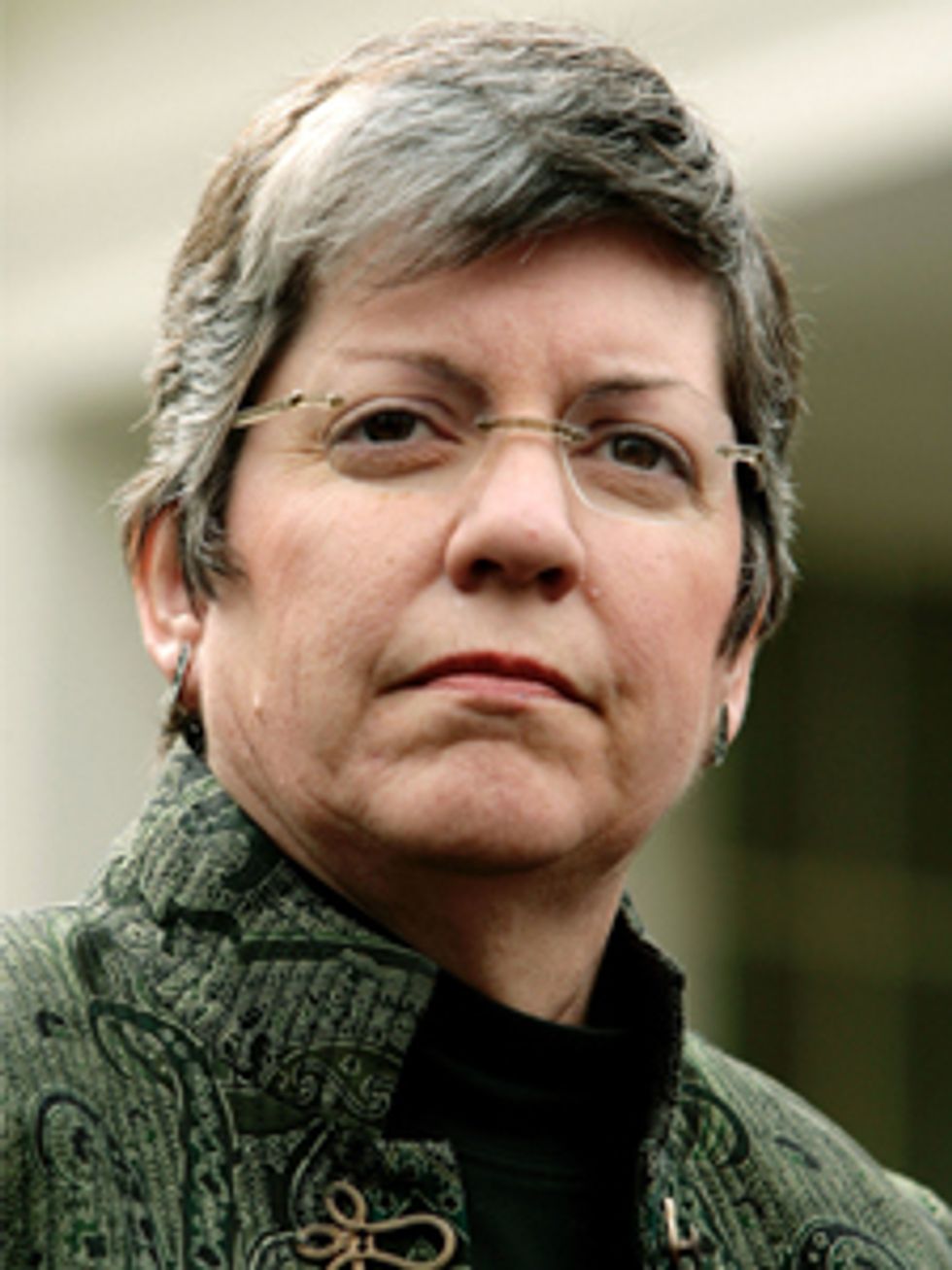 Have you ever wondered if Department of Homeland Security chief Janet Napolitano likes vag? You probably have wondered that. She is asked if she is lesbionic all the time, by everyone, just constantly. Well,now comes a lawsuit from a guy who was demoted after Napolitano took over at DHS, so she could replace him with a woman, Dora Schriro, with whom she had a "long-standing relationship." Also, some crazy person keeps calling subordinates on the telephone and screaming that she wants to blow them? That doesn't sound very lesbian, but whatever, it is very sexually harrassy (and weird!).

So Obama and Napolitano come in, James T. Hayes Jr. gets demoted and replaced, and sues because whatever.

In court papers filed in Washington federal court, Hayes says [Dora] Schriro — who previously served as director of the Arizona Department of Corrections under Napolitano — was named a “special adviser” to Napolitano on detention and removal operations in February 2009 and began to replace him at DHS and ICE meetings.

“Schriro was not as qualified for the position plaintiff had because of lack of federal law-enforcement experience,” Hayes’ suit says.

“Schriro did have experience, however, working with Secretary Napolitano. Schriro enjoyed a long-standing relationship with the secretary.”

The suit doesn’t detail the nature of their relationship.

That is pretty damning, all right, Napolitano hiring someone she'd already worked with for a long time. WHO WAS A LADY. Also it is clear that being replaced by a woman means ipso facto that you were targeted because you were a man. Why else would a man be replaced by a woman unless there was stark obvious sexism at play, or worse, affirmative action? That is just so obvious it shouldn't even need to be said. Then there's this other hilarious chick:

The court papers also allege that Suzanne Barr, Napolitano’s chief of staff at Immigration and Customs Enforcement, has engaged in “numerous” acts of “sexually offensive behavior” intended to “humiliate and intimidate male employees.

Barr’s alleged acts include calling one man “in his hotel room and screaming at him that she wanted his ‘c--k in the back of [her] throat.’

Now, who wouldn't take that in the generous spirit with which it was obviously intended?