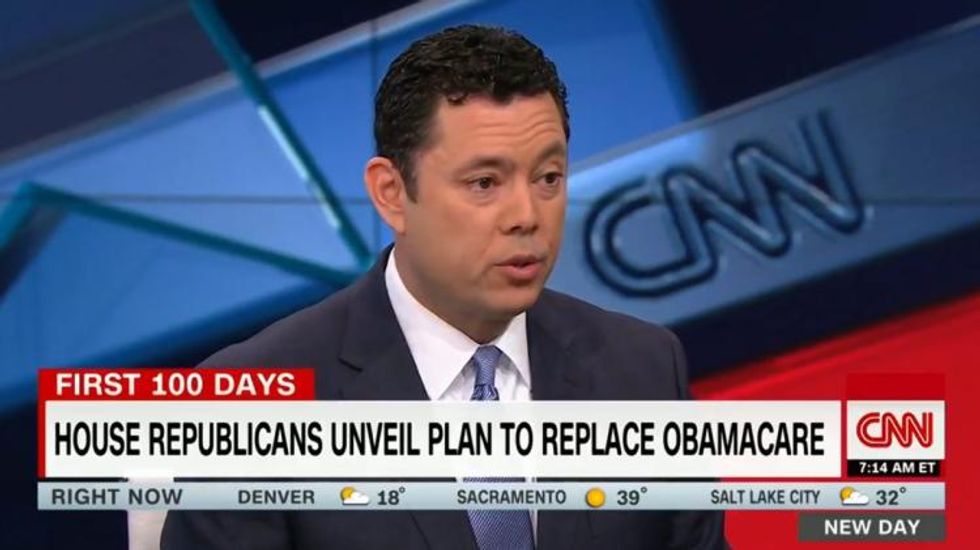 Utah Rep. Jason Chaffetz stopped by CNN's New Day this morning to discuss the GOP's new sorta-plan for healthcare in America. The plan, he explains, cuts out the things people don't want, like the mandate to buy health insurance.

The mandate, of course, is what pays for the things that people do want, like staying under your parents insurance until you're 26 and being covered despite pre-existing conditions. It is also what is supposed to keep the costs of health insurance down.

But Jason Chaffetz wants Americans to know that they can afford the GOP Healthcare plan as well! Just so long as they don't also want to purchase other things, like an iPhone.

GOP Rep. Chaffetz: Americans may need to choose between "new iphone... they just love" and investing in health care https://t.co/5Hxwn2uOl5

“You know what, Americans have choices. And they’ve got to make a choice. And so maybe, rather than getting that new iPhone that they just love and they want to spend hundreds of dollars on, maybe they should invest in their own healthcare.”

You may be wondering -- why, if the GOP plan costs less than the ACA and is so much better, why do people have to now sacrifice things?

GOP Rep.: Jesus Doesn't Want You To Have Healthcare Because You're So Lazy

It might be possible for a medical doctor to be more lacking in empathy. Wait, is he a surgeon, or no?

Well, you see -- instead of having money for both healthcare and a new iPhone, you just pay more for your healthcare and don't get that new iPhone. It all comes out in the wash, and makes lots of sense when you think about it. The problem is not that the GOP plan for healthcare is going to cost you more money, it's that you -- greedy, lazy sonofabitch that you are -- for some reason also want to be able to purchase other things. And so if you don't buy the cellphone, the GOP plan isn't any more expensive than the ACA. (It is still more expensive than the ACA.) LOGIC!

Plus, you get the peace of mind in knowing that healthy rich people won't have to sacrifice anything. Isn't that nice?

Chaffetz later appeared on Fox News and attempted to clarify his statements -- noting that he did not explain his sentiments as smoothly as he could have -- while still saying the exact same thing: that poor people need to learn to sacrifice some things in order to be able to go see a doctor when they are sick.

Jason Chaffetz believes in self-reliance, OK? He lived a hard-scrabble life as son of a man formerly married to Kitty Dukakis, a connection that helped him secure a position as a Utah co-chairman of Michael Dukakis's 1988 campaign while he was still attending college at Brigham Young University (which he attended on a football scholarship), prior to his drift to the Right. Maybe if all these poor people had simply had the good sense to be born to people with some decent connections and be better at football, they would not have to choose between healthcare and iPhones, huh?

Now sure -- you might say that without the sacrifice of his fellow taxpayers, Chaffetz would not be where he is today, being able to afford both healthcare and iPhones. If taxpayers had not funded Michael Dukakis's term as governor of Massachusetts, he never would have gotten that important political campaign experience. If he had not been elected to Congress, he would not have a paycheck, nor would he be eligible for the Federal Employees Health Benefits Program -- which would allow him the same benefits as the ACA, only with better options -- once the ACA is repealed. But to expect some richer taxpayers to sacrifice a little so that poor people who are not even Jason Chaffetz can have healthcare and iPhones? That would just be silly.

Oh, and just one teeny other thing: the new GOP healthcare plan doesn't just tell you to stop buying iPhones every month, which is definitely a thing that people do. It also kicks you off Medicaid if you have a home. Don't worry, you can keep warm at the hobo trash can fire!