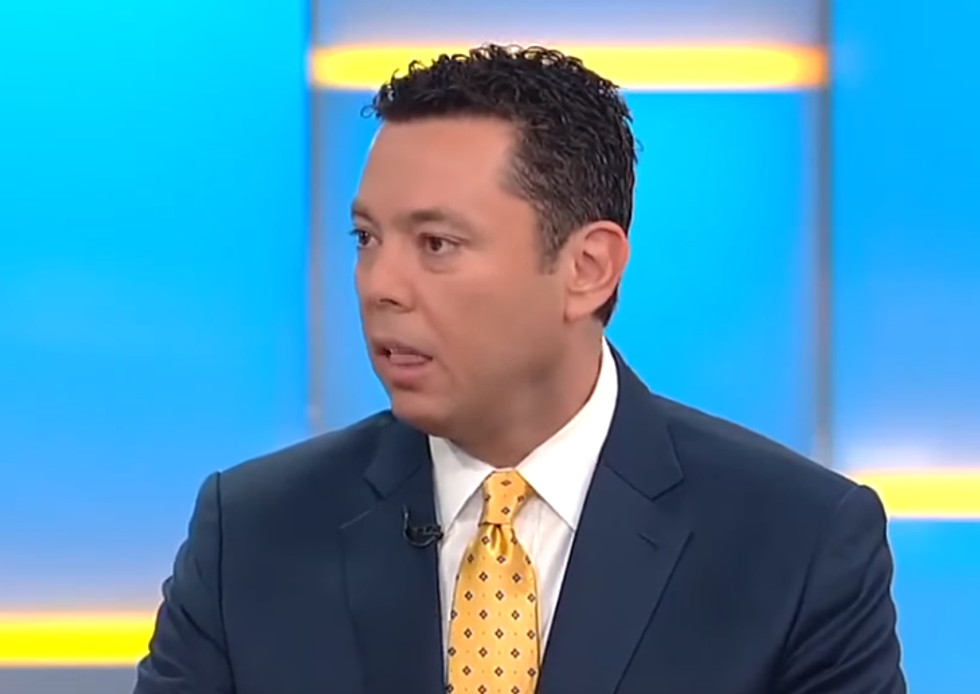 A face only a mother could punch repeatedly.

Former Rep. Jason Chaffetz's career as a Talking Ugly Head on Fox News is starting with both a bang and a whimper! Monday morning, he waked up and affixed his Mormon underpanties to his meat body, sculpted his face out of the weird shape it gets when he sleeps on it, and into the weird shape it has when he goes in public, and went to the Fox News studios for his CLOSE-UP. His brilliant thought for the day, which he could not wait to share with "Fox & Friends," is that it's REAL FUCKIN' DUMB how Congress is questioning Prince Jared Kushner this week, because shouldn't we be asking Chelsea Clinton about that time she did Benghazi?

“Republicans need to get a backbone,” Chaffetz said. “Every time the Democrats say they need to call up Jared Kushner or Don Jr. — call up Chelsea Clinton, call up the Clintons.” [...]

“There we have an inspector general who issues a report stating an actual crime,” Chaffetz said. “You have Bill Clinton, the former president, taking millions and millions of dollars from countries, that Hillary Clinton is going in and then doing business.”

“So every time a Democrat says ‘I gotta talk to Donald Trump Jr.,’ then go up and bring Chelsea Clinton in there,” Chaffetz continued, “because she was involved in the Benghazi situation, she was involved with the (Clinton) Foundation.”

It's possible Congress is investigating Jared Kushner because he worked on his pops-in-law's campaign and now he works for the White House and there are all these questions about undisclosed meetings Kushner took with Russians that may or may not have been related to the Trump campaign doing conspiracies with Russia to win the election, WHEREAS Chelsea Clinton's mother Hillary Clinton is not president, Chelsea Clinton didn't have an official role in her mother's campaign, and there is literally no evidence Hillary colluded with Russia (or Ukraine!) to steal the election FROM HERSELF and give it to Jolly Old Pussgrab McOrange.

But maybe Jason Chaffetz is right and Congress is refusing to investigate Chelsea for her obvious Benghazi-ing because DOUBLE STANDARD! He actually said on Fox that "they would never do this to the Clintons."

Is there something to Chaffetz's argument? Did Chelsea do Benghazi? Sure why not!

During the Benghazi hearings, GOP Rep. Martha Roby memorably asked Hillary if she was home alone THE WHOLE NIGHT of the Benghazi attacks, and Hillary and everybody else giggled because it sounded like Roby was wondering if Hillary was visited by any extramarital weenus or hoo hoo nookie that night. Roby was not amused.

But the truth is we were also laughing because the secret all liberals know (AND ARE NOT SUPPOSED TO TALK ABOUT) is that Hillary was home alone that whole night (unless Huma came over for Benghazi 'n' Chill time), and that she was able to stay there by herself because Chelsea Clinton, former first daughter, was right at that very time using a jetpack to ZOOM ZOOM ZOOM into Libya and Do Benghazi. Like what do you think people who work at the Clinton Foundation do? It's right there in the employment agreement. ("You may be called upon to Do Benghazi occasionally, and you will definitely have to Clinton Body Count at least one person per annum. Do not worry, you will get time-and-a-half for these things, double-time on holidays.")

So yeah, it's true, and fuck Jason Chaffetz right in his sideways face hole for blowing the whistle on it.

Oh well. We didn't think it was possible for Jason Chaffetz to get dumber, but we guess when you mix his bizarre face with Fox News, some sort of dipshit chemical reaction occurs and you get a level of MORE STUPIDER than the scientific community ever thought possible.

In that spirit, here are some more questions Jason Chaffetz should ask on Fox, to impress his new bosses so they keep paying him eleventy Ameros per week:

These are just very good (and important) questions Jason Chaffetz should ask on "Fox & Friends," and if he takes Wonkette's advice, he is sure to have job security at Fox for approximately one million years.

Wonkette salaries are fully paid by lovely souls like YOU! If you love us, click below to pay our salaries!