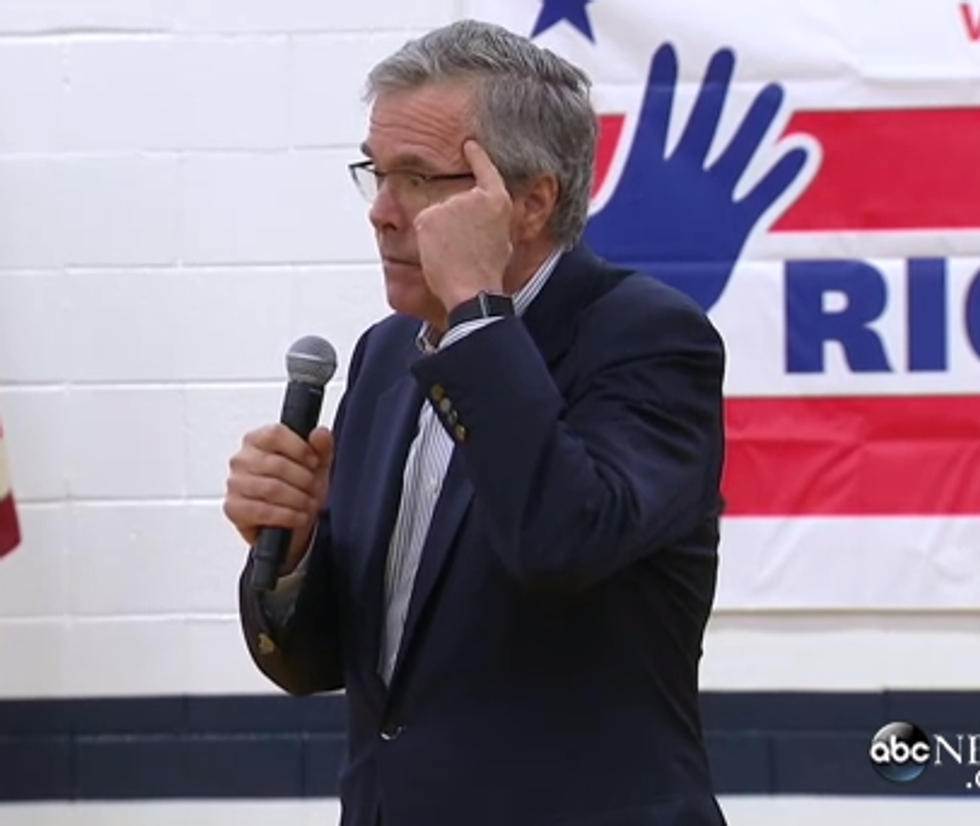 Ooh, it's time for some fighting words! Jeb Bush is willing to face all the tough questions, and Hillary Clinton is not, according to Jeb Bush. He has nothing to say about what actually happens when he tries to answer those questions, let's just forget about all that, because at least he's trying, therefore he gives himself an A for effort:

“You can’t script your way to the presidency,” Mr. Bush said of Mrs. Clinton at a stop in Reno on Wednesday.

Fielding questions from residents, Mr. Bush repeatedly mocked Mrs. Clinton for avoiding formats in which she might encounter unexpected questions from potential voters and reporters. Those are the kind of formats, Mr. Bush suggested, that he relishes and seeks out.

Jebbers just loves those situations, when people (say, Megyn Kelly?) ask him a really hard, unexpected question like "Would you invade Iraq like your idiot brother did?" and he gets to shit himself on live television. That's part of the fun of campaigning! So let's get up to date on what kinda great questions and answers Jeb Bush has done lately, the kind that Hillary Clinton is too much of a coward to answer.

Jeb Bush did a town hall meeting in Reno on Wednesday (WHERE'S YR TOWN HALL, HILLARY?), and he managed to shoot at least two loads of utter stupid during the course of the event. First of all, he tried to answer that hard "would you invade Iraq?" question again, and it went like this:

"When I was governor, I got to, I felt it a duty ... to call all of the family members of people who lost their lives ... And I felt a duty to do that because I admired the sacrifice of their families, and I admired the men and women, mostly men, who made the ultimate sacrifice. So, going back in time and talking about hypothetical 'what would have happened, what could have happened?', I think, does a disservice for them. What we oughta be focusing on is, what are the lessons learned?

Oh, we shouldn't talk about it now that Jeb has talked about it all wrong so many times, because it's rude to the troops his brother sent to die under false pretenses, but we can talk about the "lessons," though we're not sure how you talk about "lessons" without talking about "hypotheticals," but our confusion is clearly because Jeb Bush is far too good at answering questions for us to possibly understand. He says that his brother Dubya fixed everything, though, with the surge, and that we left Iraq all shiny and happy.

Of course, a mean liberal college student at the same town hall meeting decided that it was HER turn to ask a gotcha question:

“It was when 30,000 individuals who were part of the Iraqi military were forced out — they had no employment, they had no income, and they were left with access to all of the same arms and weapons,” [University of Nevada student Ivy] Ziedrich said.

She added: “Your brother created ISIS.”

Mr. Bush interjected. “All right. Is that a question?”

(He knows it is not a question, because her voice didn't make that question mark sound at the end, and Jeb Bush is good at identifying questions.)

Then Ms. Ziedrich asked: “Why are you saying that ISIS was created by us not having a presence in the Middle East when it’s pointless wars where we send young American men to die for the idea of American exceptionalism? Why are you spouting nationalist rhetoric to get us involved in more wars?”

Mr. Bush replied: “We respectfully disagree. We have a disagreement. When we left Iraq, security had been arranged, Al Qaeda had been taken out. There was a fragile system that could have been brought up to eliminate the sectarian violence.”

He added some things about how the student was "rewriting history" (which you are not supposed to do, see above), and that everything was great until Obama pulled out. Hillary Clinton would have been bad at the question, "your brother created ISIS," because she would've been like "George W. Bush is not my brother." Way to run from the hard-hitting questions, Hitlery!

One more hard question, and then we'll go. "How will you be different from your brother?"

Fuck, he wasn't supposed to say that! Now the surprise, about him running for president, is totally ruint. Oh well. That's just what happens when you are too good at questions, you occasionally mess up.