Jeb Bush May Bless Us With Presidential Run 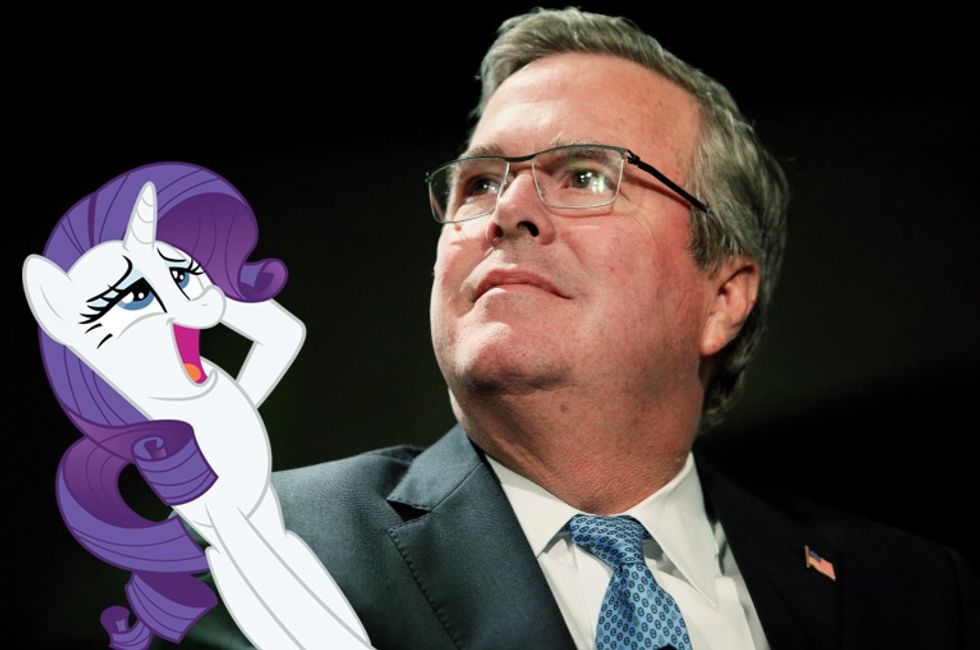 In a Christmas present for America, former Florida Gov. Jeb "The Smart One. No Really" Bush announced Tuesday that he will "actively explore the possibility" of a presidential run, because his country needs him a whole lot. Taking to the traditional platform for such announcements, Twitter and Facebook -- late-night talk shows are so over -- the passionate nonentity said that the topic just sort of naturally came up at the Thanksgiving dinner table, as is the norm in American families:

Like many of you, our family was blessed with the opportunity to gather together over the recent Thanksgiving holiday.

Columba and I are so proud of the wonderful adults our children have become, and we loved spending time with our three precious grandchildren.

We shared good food and watched a whole lot of football.

We also talked about the future of our nation. As a result of these conversations and thoughtful consideration of the kind of strong leadership I think America needs, I have decided to actively explore the possibility of running for President of the United States.

That sounds a lot like a pretty typical Thanksgiving dinner conversation for a lot of us, apart from the part where the crazy rightwing patriarch substitutes "Welp, guess I'll run for president" for the more traditional "Somebody want to tell me why the blacks think burning down their own neighborhoods is going to do them any good?" And then the kid who just got home from their first term at college says, "Maybe you should consider announcing an exploratory committee first" or, again, depending on the family, "My god, I can't believe you! Everything you taught me is a lie! Also, I'm gay!" and runs sobbing from the table. We're betting that Barbara Bush wasn't there.

In any case, John Ellis Bush also said he'll start up a PAC that will "help me facilitate conversations with citizens across America to discuss the most critical challenges facing our exceptional nation" -- that is, to meet the people with the money, so he can ask "What is thy bidding?"

Bush also warned, "In the coming months, I hope to visit with many of you and have a conversation about restoring the promise of America," so you'll want to remain vigilant and perhaps install a second deadbolt on your door.

And so the questions remain: Does America really need another member of a political dynasty? Can a "moderate" Republican who has supported comprehensive immigration reform have even a sliver of a chance in the GOP primaries? Does our great nation actually want a presidential candidate who looks like a photo morph of his brother and Philip Seymour Hoffman?