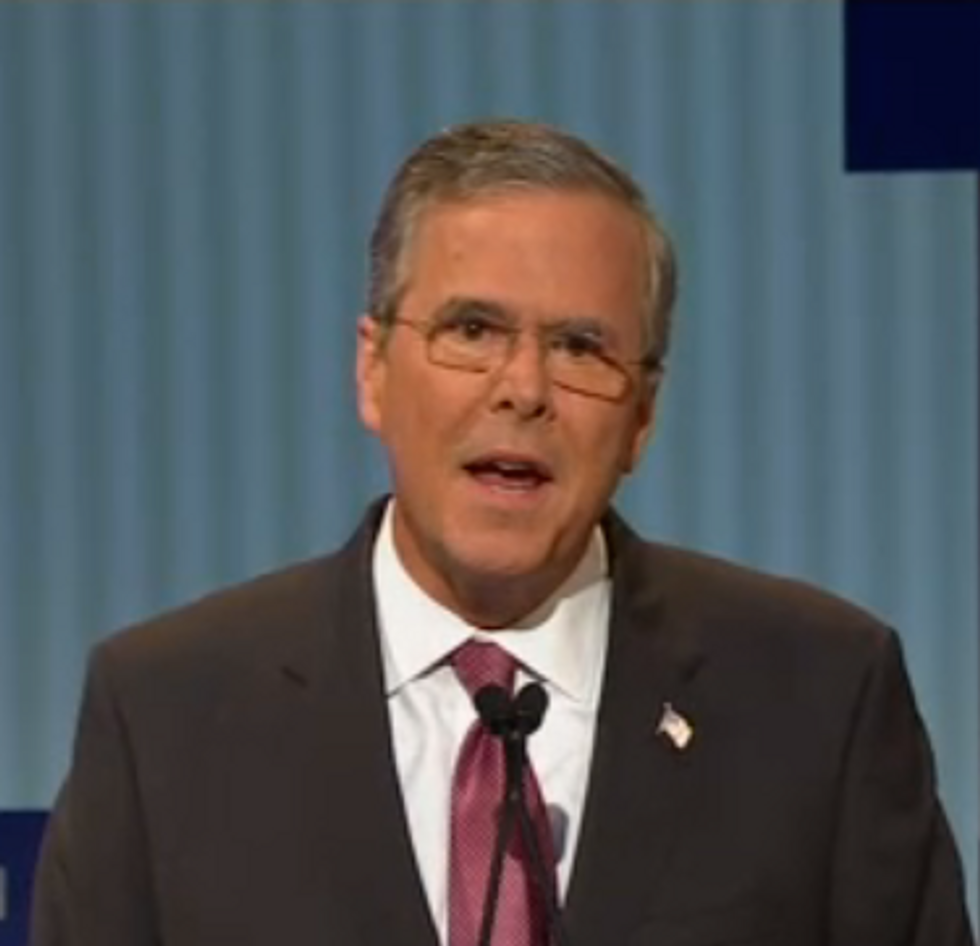 We thought Jeb! Bush had learned his lesson about not saying words on the subject of Iraq. You know, because of that one time he was still for the invasion, and then had a confuse about the yes-or-no question of "knowing what we know now, would you still invade Iraq, yes or no?" (see, trick question!), and then he was quite sure it was disrespectful to The Troops to even talk about it, and then he was against the invasion, but in a respectful-to-the-troops sort of way. And all in the course of a single week!

But nope! Apparently, we misunderestimated him. Seems the future not-president of the United States has buckled down and learned some stuff and things about Iraq from his foreign policy adviser, George Dubya Bush (really!), and now that he understands that whole situation, he has some thoughts about it and who is really responsible for getting us ass-rammed in Iraq all these years:

Jeb Bush will blast Hillary Clinton and the Obama administration for their failure to preserve a hard-won peace in Iraq in a policy speech Tuesday night in California. [...]

“ISIS grew while the United States disengaged from the Middle East and ignored the threat. And where was Secretary of State Clinton in all of this? Like the president himself, she had opposed the surge … then joined in claiming credit for its success … then stood by as that hard-won victory by American and allied forces was thrown away.

“In all her record-setting travels, she stopped by Iraq exactly once.”

YEAH, Hillary Clinton, how dare you celebrate success in Iraq when you did not even travel there but the one time, which is probably why we failed in Iraq! Maybe if you hadn't been so busy traveling the globe to meet with "Old Europe" and our other former allies, telling them to please be our friends again and we will stop being freedom dicks to everyone, we promise, we would have permanently won the war that Bush won for us, in 2010, never forget:

Do more stupid with your mouth, Jeb:

“Who can seriously argue that America and our friends are safer today than in 2009, when the President and Secretary Clinton — the storied “team of rivals” — took office?” Bush plans to say.

OK, OK, don't all of you raise your hands at once. We know that the one Real Bad Terra-ist Attack On U.S. American Soil actually happened when that other Bush was president -- even though conservative revisionist historians would have us think otherwise -- and nothing like that has happened while President Obama has been presidenting us, and no, the BENGHAZI!!! 9/11 is not actually worser than the 9/11 that happened while George Bush was reading a book about goats.

Go on, Jeb, tell us more about how the Iraq war is all the fault of the administration that's been trying to clean it up:

“So eager to be the history-makers, they failed to be the peacemakers. It was a case of blind haste to get out, and to call the tragic consequences somebody else’s problem. Rushing away from danger can be every bit as unwise as rushing into danger, and the costs have been grievous.”

Aaaaaand here's the point where we just say fuck it, roll our eyes, and sigh in Jeb's general direction because, really, dude? You want to lecture Clinton and Obama on the dangers of "blind haste"? Do you even know how we got to Iraq, bro?

“Instead of simply reacting to each new move the terrorists choose to make, we will use every advantage we have — to take the offensive, to keep it, and to prevail. In all of this, the United States must engage with friends and allies, and lead again in that vital region.”

Great plan, genius. Let's do more war, even harder, to get us out of the Iraq mess created by your dumbass family, by doing all that war in Iraq. That should fix everything.