Jeb Bush Talked To Black People, Says They Mattered, He Can Be President Now? 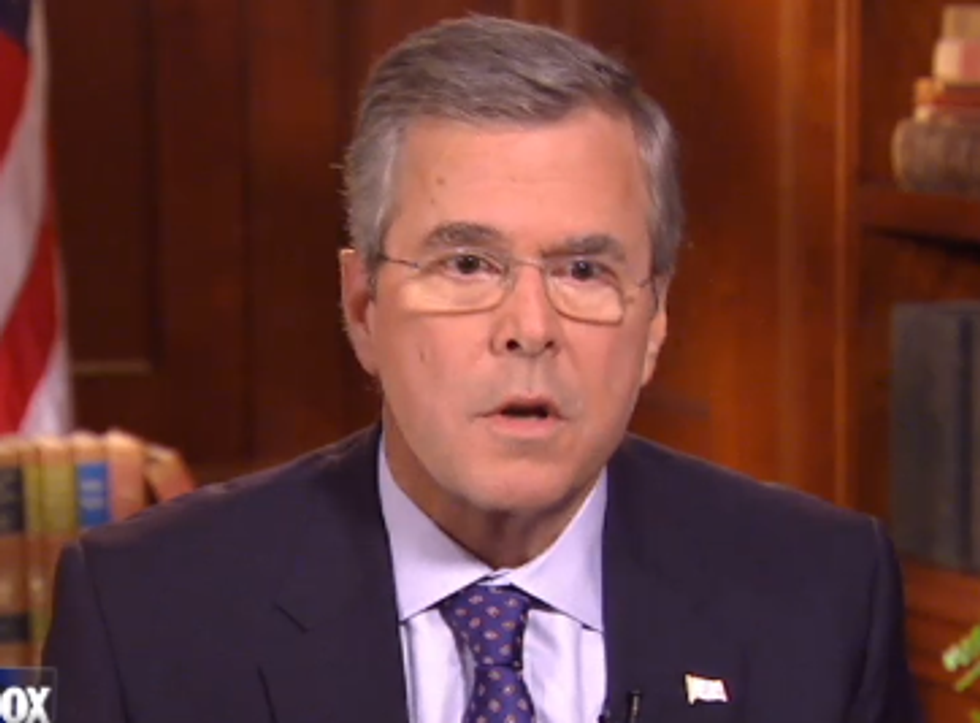 What is it this time?

Uh-oh spaghetti-o, what did Jeb Bush do this time? Did he make a sexism? A racism? A Iraq? No! He did a racial outreach whatwhosit thing, by talking to some black folk, you know, about black folk things, yay for Jeb, clap clap clap!

Aides say that former Florida Gov. Jeb Bush met with advocates for the "Black Lives Matter" movement on Wednesday night before a campaign rally in Nevada -- but that didn't entirely deter members of the group. [...]

Bush spokeswoman Allie Brandenburger said that Bush met with Black Lives Matters advocates "ahead of his event in Las Vegas on issues including criminal justice reform. As Governor Bush laid out in is speech to the Urban League, he is committed to campaigning across the nation as he seeks the presidency, talking to everyone and every community about his vision for restoring opportunity for all Americans."

There was a meeting, but no activists from the Black Lives Matter movement participated. Instead, Bush met with a local elected official, a GOP lobbyist and a staffer from an anti-poverty organization.

Aw, pistachio nuts. And just when we were about to give Bush some credit, for being the first Republican presidential candidate willing to engage with the Black Lives Matters movement, in a nice way, even! Never mind!

According to HuffPo, here is how it went down:

Kevin Hooks, president and CEO of the Las Vegas Urban League, told HuffPost he set up the meeting at the Bush campaign's behest. His organization focuses on providing job opportunities for low-income residents. Hooks said that while he respects Bush for reaching out, he would not characterize the people at the meeting as Black Lives Matter activists. "It's a little disingenuous," he said.

But really, what's the difference? Surely, black lives do matter to those non-Black Lives Matter people, what Jeb talked to, all racial transcendence style. North Las Vegas Mayor Pro Tem Pamela Goynes-Brown was at the meeting too, and she said that while they didn't talk about the Black Lives Matter movement, of which she is not an activist member, she does support it. That's basically the same thing, yeah? Partial credit for Jeb?

Besides, it's not like Bush didn't make the effort:

Hooks told HuffPost that the campaign was earnest in its outreach attempts and willing to talk to anyone, but "people didn't really want to talk to them."

Can't imagine why. Maybe the people what don't want to talk to him haven't heard that he's actually also too a minority, the Hispanic kind. Next time you try to do outreach, Jeb campaign, be sure to the mention that part, it might work better. Not that the campaign is doing much mentioning on the subject at the moment:

The Bush campaign did not comment on whether it stood by its statement that the candidate met with Black Lives Matter advocates. The campaign said that advocates were invited, and couldn't speak to why people might not want to attend.

Hey, co-founder of Black Lives Matter Patrisse Cullors, tell us what you think about Jeb's claim:

"He lied, or does he not get what's happening? And he thinks he's meeting with people when he's not?" she asked. "Incredible. In-fucking-credible."

Sorta gotta agree with you there, Ms. Cullors. It's not as if Democratic candidates haven't had their own challenges with the Black Lives Matter movement -- they certainly have, which is why they're being pushed ever more aggressively to focus on issues of systemic racism and criminal injustice -- but at least they're not saying, "Hey, I talked to a black dude, we cool now?" Because, uh, no.