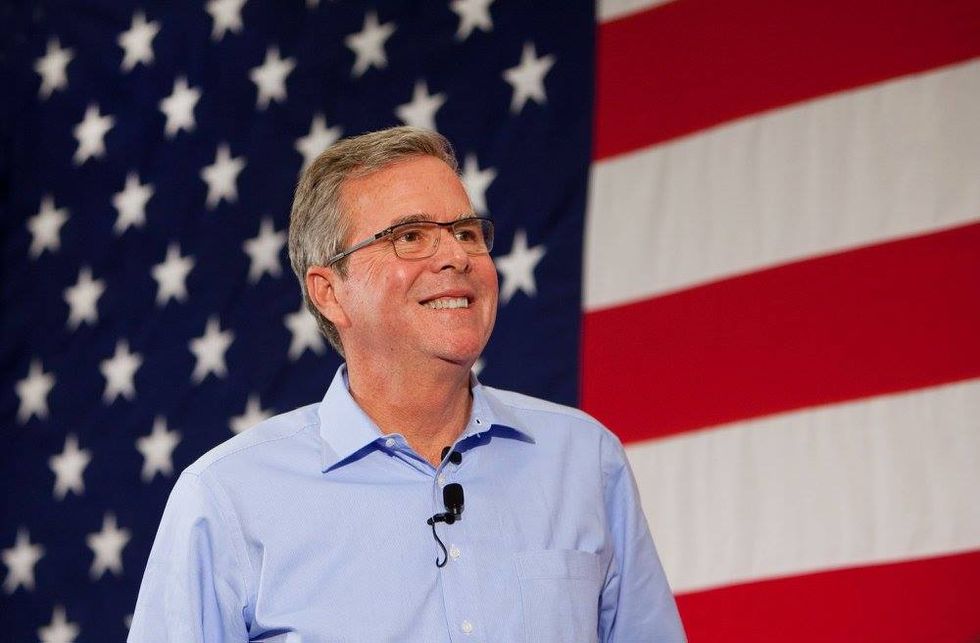 There's one thing Jeb Bush learned real good from Mitt Romney, besides how to flip flop around like a dying fish on even the simplest of questions, and that is: don't try to hide how rich you are. You are rich, and everyone knows it, so don't be all mysterious and defensive because you'll be asked about it for the rest of your life. (We're still waiting for Mitt to let us see his tax returns so we can calculate approximately how much of his cash is stashed in the Cayman Islands.)

Thus on Tuesday, Jeb! let us oooh and ahhhh and LOL over 33 years of tax returns, and yes, he wants lots of extra credit for releasing so many years, when most presidential candidates release far fewer. Please do pat him on the head and tell him he's a good boy, he needs to hear that because his daddy never loved him.

So let's get right to it. How much money does Jeb have to be able to afford his wife's REALLY FUCKING EXPENSIVE addiction to clothes and sparkly baubles?

His net worth is between $19 million and $22 million, aides said.

He's given almost $750,000 to charity since leaving the Florida governor's office in 2007. That is also when Bush's net worth exploded as he began earning big paychecks from speeches, consulting and sitting on corporate boards.

Before you give Jeb credit for being so generous, not that you would, Mother Jones did the math and figured out that between 2003 and 2013, Jeb "gave 1.5 percent of his income to charity, according to the lists of charitable deductions in the tax returns. That's about half the national average," and it's also a lower rate of charitable giving than the Romneys, the Clintons, the Obamas, and even the Bidens.

So how did Jeb accumulate that kind of scratch, besides not sharing it?

Bush made an average of about $2 million annually during the six years he was a paid advisor at the financial services company Barclays. During his two years as an advisor to the now defunct investment bank Lehman Brothers, he averaged about $1.3 million in compensation, aides said.

Not too shabby. Granted, it's not Clinton money, but then, who the hell would pay half a million bucks to listen to Jeb give a speech? Maybe the same sucker who'd seek his financial advice at Lehman Brothers. You know, before it went and bankrupted the hell out of itself. Hey, anyone know if Jeb's collecting any of that sweet post-bankruptcy bonus cash?

Here's the fun part, though (besides speculating that it was Jeb what drove Lehman Brothers into the ground because he's a Bush, and Bushes tend to break things): Vox notes that Jeb's income is "comparatively modest" until, oh, the second year of his daddy's presidency. And then it really took off once Jeb left Florida governor gig, his brother now president. See? Look at this fancy chart the nerds at Vox made for you visual types.

Must be nice to have a real well-known dad to hook you up with his corporate buddies. Better than a golden goose, even. Thanks, Daddy!

But do we begrudge Jeb Bush his millions of dollars? We do not. There's nothing inherently bad or wrong about being a millionaire. Sure, plenty of rich people are terrible, and we should eat them because they taste like caviar. But sometimes rich people can be good people, even though they are rich! Sometimes.

Are we judging Jeb for making those millions with bullshit jobs like sitting on boards and consulting and senior advisoring Barclays "on a wide range of global economic issues with a mind towards navigating government policies"? We are not even doing that! It's nice work if you can get it. (Most people can't get it.) When you are born into a rich family, though, and you're being groomed for the family business of presidenting, that's what you do. You drop your name, start some firms and foundations, collect some money, clock in at the Florida's governor mansion so you've got some "experience," and then let your dad's buddies take care of the rest. No judgment!

However. Are we LITERALLY DEAD RIGHT NOW from laughing at Jeb pretending he is some sort of self-made bootstraps-pulling schmo, just living the American dream and proving that if he can do it, anyone can?

Over these 33 years my income increased thanks to hard work and experience. My most recent tax return reflects that success with an annual income of $7.4 million.

Fuck yes we are, and so are you.