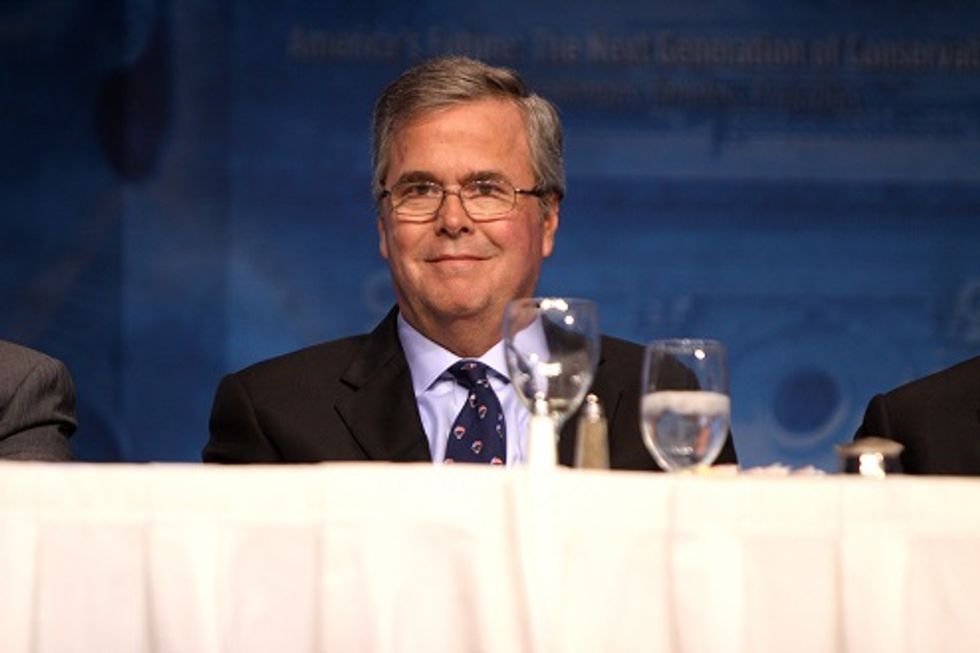 In Our Great Nation’s short history, we have created many uniquely American traditions: Thanksgiving, Independence Day, Patriots’ Day, free refills on soda, and electing members of the Bush family to the White House.

Jeb Bush, the Bush son who probably should have run for the office the first time around, because Jeb did not get C’s and has fewer reported drug or alcohol problems, purportedly announced that he was “thinking about running for president.” Which is not actually real news, because Bush already said that he was considering a bid for the presidency and he’d make up his mind at the end of 2014. But, let’s all pretend this is news, because everyone else is breathlessly speculating reporting on it and Yr Wonkette doesn’t want to be left out.

Are Americans so wedded to tradition that they will entertain the idea of yet another Bush in the White House, or did Dubya completely fuck up his little brother’s chance to hold the highest office in the land? Well, when even yr mom thinks the nation is tired of your family, it’s probably an uphill battle. And, Jeb, we have to tell you: your brother’s transformation from Leader of the Free World to Bob Ross impersonator is not helping your cause.

Dubya is an albatross around his younger brother’s neck. After seven years out of office, and an excellent portfolio of oil paintings, 43 is still less popular than the (somewhat inexplicably) least favoritest modern President who was not booted out of office, Lyndon Johnson.

Even without the specter of both W and H.W. looming, Jeb faces a rough ride. Jeb’s own policies are not popular with his party's base. Jeb does not believe Common Core is a communist brainwashing plot targeting our children. He also does not believe we should give guns away with Happy Meals or that undocumented workers are the root of all evil in America. It’s almost like he’s in favor of having a federal government.

Given these obstacles, what external force could have shifted Jeb’s position from possibly running to maybe running for the presidency? Delicious moneys! As reported by Slate, Jeb’s more moderate positions (like not wanting to overthrow the federal government) and his respectable showing as Florida’s governor seem to have swayed the GOP’s donors, who are apparently lining up to fund the possible campaign.

But, upon examination of the potential pool of candidates for the 2016 primary, we have to concede that the Party of No needs someone who’s perceived to be sane. With Chris Christie wrapped up in Bridgegate: the Musical, the GOP must be terrified they are going to hit the trifecta with a primary consisting of Cruz, Santorum, and Rand Paul calling Paul Ryan too moderate. And, while Jeb may be touted as the softer side of conservatism, he’s only softer in comparison to Cruz and Co’s nonsense: Jeb has consistently hated on women being able to control their own bodies, would like to be able to fire all teh gays and is willing to invade any country that crosses his imaginary line. So, with some of his conservative values untarnished, connections to the GOP’s deepest pockets and a reputation for sanity, maybe Jeb should be the frontrunner. Hey, what can we say, it’s a low bar you’ve got to hurdle over there. So, step right up, Jeb, the circus is back in town and it’s your turn in the ring.