Jeb Bush Will Repeal Obamacare, Replace It With Apple Watches (Buy Your Own, Loser) 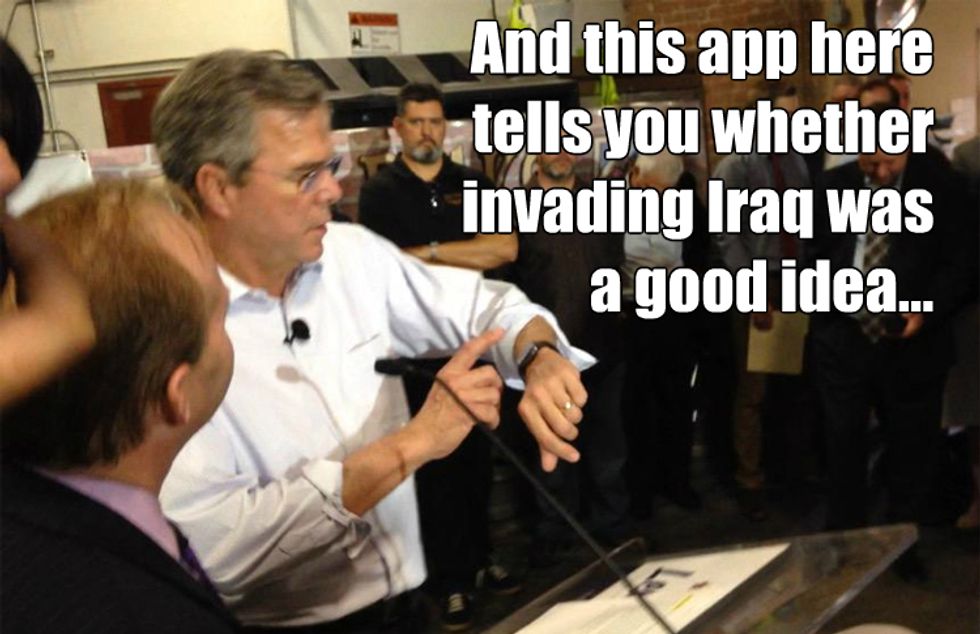 "John Ellis Bush" Bush is pretty excited about how the Wonders of Technology could help make us all healthier and happier, like for instance how if everybody had an Apple watch, then they could start taking responsibility for themselves, and we could repeal Obamacare.

At a not-yet-campaign appearance in Tempe, Arizona, Bush looked forward to repealing Obamacare and replacing it with a "consumer-directed model" that would let people "make decisions for themselves and give them the tools to do so" -- because apparently having an insurance policy that covers doctor visits and prescriptions takes away all your choices. And then he explained how his nifty Apple Watch is going to revolutionize healthcare:

On this device, in five years, will be applications that will allow me to manage my health care in ways that five years ago were not even possible. I'll have the ability, someone will, because of my blood sugar, there'll be a wireless, there'll be a, someone will send me a signal, it'll come here, I'll get a double beep, saying you just ate a butterscotch sundae, you went way over the top, and you're diabetic, you can't do that, whatever.

We’ll be able to guide our own health care decisions in a way that will make us healthy. And ultimately, we have to get to a health system away from a disease system.

Gosh, that does sound exciting! Now, just put aside the image of Jeb Bush with butterscotch syrup and ice cream dripping down his chin and try instead to imagine the Gateway Pundit headlines if Michelle Obama made a similar suggestion. Watch apps that monitor your vital signs and eating habits, and then nag you? BIG SASQUATCH IS WATCHING YOU EAT! They want all Americans to wear ankle monitors!

We're not against the basic idea of using technology to promote health, but we'll go out on a limb and say maybe those toys would be a nice supplement to our medical system, not a replacement? And hey, they could even help keep costs down, sure, although we can already hear the teabaggers whining about how the government wants to start giving away ObamaWatches. Plus, we suppose it would also be class warfare to point out that the cheapest Apple Watch is the "sport" model, which is still $350, which is pricey for people who aren't rich like Jeb Bush, but poors aren't supposed to have healthcare anyway, right?

Now let's be fair -- Bush didn't actually say that smart watches would replace traditional medical care. Obviously, that's what WebMD is for. And also the death panels that he thinks we need to make old people sign up for.

DNC chair Debbie Wasserman Schultz used the Information Superhighway to point out a small problem with Bush's reasoning, also too:

Ouch! But who knows -- maybe in another five years, Jeb's Apple Watch can dispense some soothing ointment for that burn.