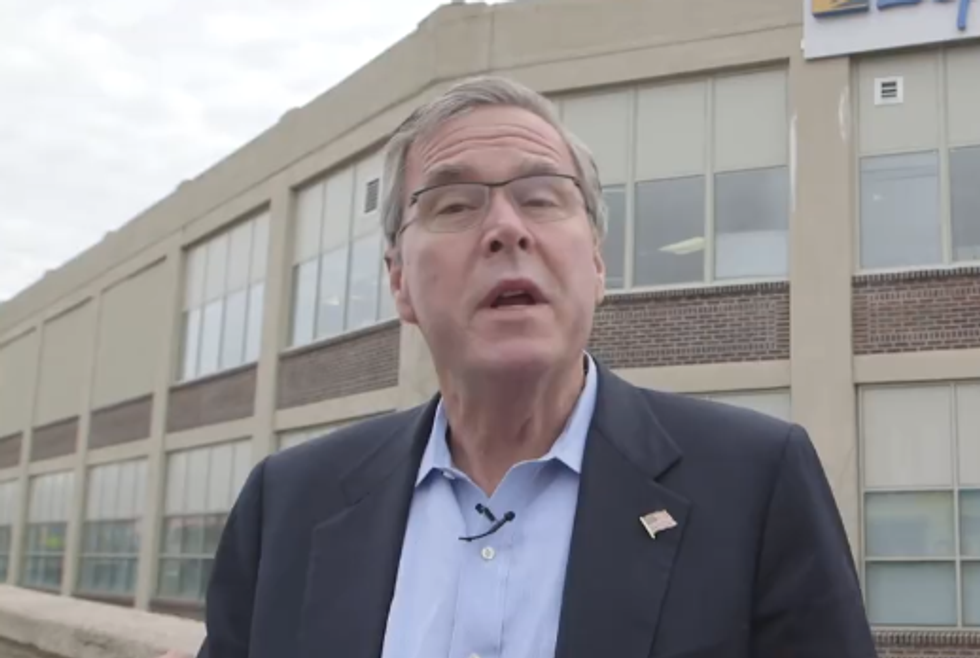 Jeb Bush continues to try new ways to slapfight back against Donald Trump, who keeps making mean "Your Mom" jokes at him. Accusing Trump of being a "germophobe," however, probably isn't going to be a winning strategy. But who knows -- maybe a lot of people like germs, or at least don't like people with phobias? It's just one item in a social-media "quiz" that asks important questions about what kind of candidate you want, like a dating matchup game!

Once you get past your objections that you're not a candidate at all, you need to decide which of these important binary choices you favor: Conservative who is strong like bull, or wimpy Democrat-loving Clintonista. And your final choice is about Donald's weird fear of germs:

And then, before you even learn whether you're a fake Republican who needs a personal attendant to follow you around with a bottle of with hand sanitizer or a True Conservative who stands with Bush and shakes everyone's hand, no matter how much phlegm and baby poop may be on it, you have to give an email and zip code, because this is really about building a mailing list. If you agree with Jeb enough, you find out:

Jeb Bush is a conservative reformer for President who will actually get results. Like you, he supports cutting taxes, reducing spending, and limiting the role of the federal government in your life.

But if you're an effete germophobe, the quiz laughs in your face -- without a surgical mask -- and says:

So take that, Donald! Jeb Bush will have none of your prissy worries about germs! Real Americans don't want a gun-grabber who puts on rubber gloves before even grabbing guns; they want a man who knows that God Hates Phages.

Still, there may be precedent for Bush's strategy here: We remember how in the old campy "Batman" series, Batman refused to kiss a baby because of his completely justified fear of spreading germs, and then the Penguin became mayor of Gotham City. So Jeb! really could be on to something here.

Also, we have absolutely no difficulty imagining Donald Trump in 30 years, wandering the darkened top floor of one of his hotels, not cutting his fingernails and shuffling around with Kleenex boxes on his feet.

[Time via The Hill / Which Candidate Are You? (I am not a candidate. YOU'RE the candidate!)]