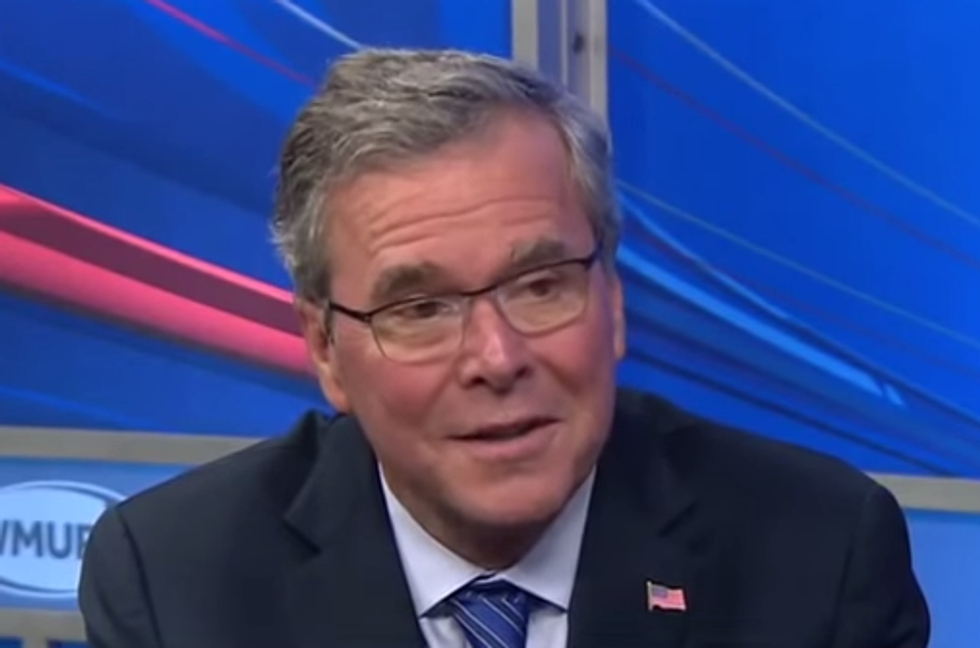 Jeb Bush has dreamed of being president since, oh, the last century. His dumb big brother got to skip ahead of him (UNFAIR, Dad), but now it is finally Jeb's turn. So given his decades of dreaming and scheming and preparationing, you'd think he would know how to answer the most obvious question he will be asked during his not-yet-official campaign: Are you a fucking idiot just like your brother?

Jeb stopped by Fox News -- the cable news network that was the official sponsor of the George Dubya Bush presidency -- for a quick friendly chat about how Jeb supposedly wants to be president, though he seems to be trying real hard to make sure that doesn't happen. And he was asked a simple yes-or-no layup question about Iraq that every single moron in America, including Jeb's own brother, knows how to answer: "KNOWING WHAT WE KNOW NOW, would you have authorized the invasion?"

And he sharted all over himself anyway. Given nearly 24 hours to go to his room and think about how saying "Yes, KNOWING WHAT WE KNOW NOW, I would totally full on invade Iraq all over again, Jeb for president!" is the WRONG FUCKING ANSWER, Jeb was given a second chance by, of course, another Fox personality, Sean Hannity, on the radio:

"I interpreted the question wrong, I guess. I was talking about given what people knew then, would you have done it? Rather than knowing what we know now. And knowing what we know now, clearly there were mistakes as it related to faulty intelligence in the lead up to the war and the lack of focus on security," Bush told Hannity. "My brother's admitted this. And we have to learn from that."

Claiming he "misinterpreted" a question even more basic than "what newspapers do you read?" -- that's supposed to reassure voters he is ready to be leader of the free world? He thought Megyn Kelly meant "then" when she said "now" so you can understand why he struggled with a yes-or-no question to which the only acceptable answer is "no"? (Unless you are Dick Cheney, because Dick Cheney would invade the bejesus out of Iraq again, even knowing what we know now, for shits and giggles and because he just loves killing people, or at least shooting them in the face. But running on a "I'm just like Dick Cheney" platform is also not advisable.)

One of the many -- many, many, oh so many -- reasons Jeb Bush is never going to be president is that his brother almost destroyed America, and Americans, even though they are profoundly stupid, vaguely grasp that. Sure, it's taken a decade for a majority to figure out what some dirty fucking hippies in the streets (and most of "old Europe" and the United Nations weapons inspectors) already knew before we got ourselves eternally quagmired there: that there was no goddamned reason to shock-and-awe Iraq in the first place, because there were no goddamned weapons, Saddam Hussein did not cook up 9/11 while chilling in Osama bin Laden's rec room, and while Iraq was led by a third-rate jerkface, the nation was pretty well contained and not the ground zero for terrorists that it is now.

It is inconceivable (and yes, we are using that word correctly) to imagine that not a single one of Jeb Bush's advisers have considered that Jeb would be required to comment on the failures of his brother's miserable presidency. Especially after Jeb recently professed, in a move that seems calculated to ensure he never sets foot near the White House, that his brother is one of his foreign policy advisers.

Jeb's fuck-up was so bad, he provided his Republican competitors in the race to lose to Hillary Clinton the opportunity to try to score easy points by saying that of course they would not invade Iraq, KNOWING WHAT WE KNOW NOW, although we cannot remember Rand Paul, Ted Cruz, or Chris Christie marching with us in 2002 to oppose the invasion before it happened.

Admittedly, there is no good way for Jeb Bush to explain how he epic FAILED such an easy question. There is also no good way for Jeb Bush to explain why he is bothering to run for president. He was a lousy governor of Florida, which is why he's still unpopular there -- and, oh yeah, he's got a family name that is so tainted with the stench of dead bodies and a broken economy and general stupidity that he'd be better off changing his last name to something more palatable to the American public. Like Hussein or Stalin or Castro, perhaps.

It's not too late for Jeb to scrap the whole idea and decide not to run after all. There's no Republican who has a sliver of a chance at winning the White House in 2016, but for Jeb especially, the only winning move is not to play.