Jeff Flake Wonders How Politics Got So Ugly, Doesn't Own A Mirror 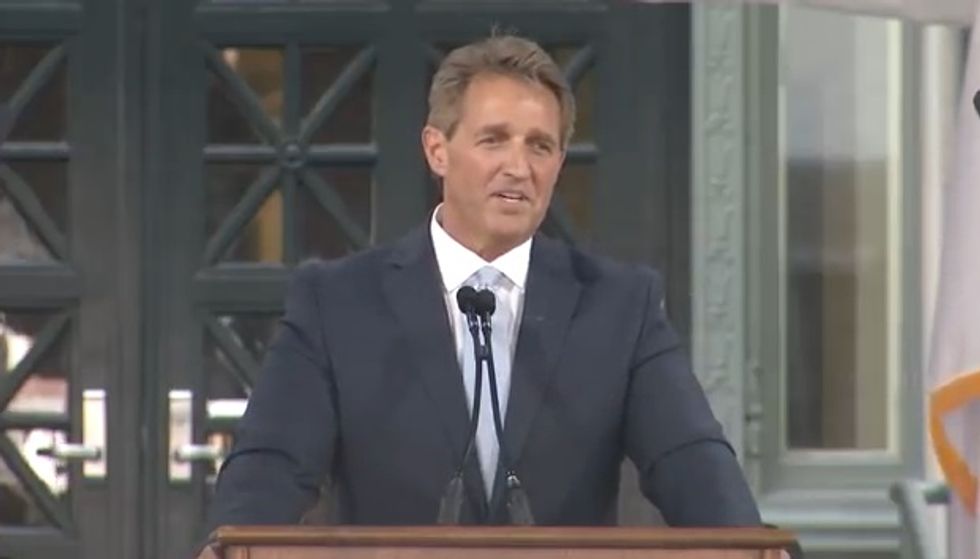 Senator Jeff Flake gave a real barn-burner of a speech yesterday to the graduating class of Harvard Law School. Now that he's safely leaving the Senate and moving back to Arizona, he's sure gotten brave in attacking the politics his party has pursued ever since Ronald Reagan spent his entire presidency recycling the funny joke, "The nine most terrifying words in the English language are, 'I'm from the government and I'm here to help.'" Now that we have the kakistocracy Republicans have been yearning for, after decades of calls to shrink government to the size you can drown it in a bathtub, attacks on "unelected federal judges," and pandering to folks who think the tree of liberty needs to be refreshed with the blood of tyrants, Flake wants to know just how all this happened.

His speech at Harvard -- you can read the whole thing at Time -- was really big on pointing out that things are terrible, full of calls for both parties to come together, and utterly devoid of any acceptance of responsibility. As with his speech announcing his retirement, Flake is being praised for his political courage, at least until his next brave vote to slash the safety net or cut taxes on the rich a little more. Here's some of Flake's tough talk:

[There] are times when circumstances may call on you to risk your career in favor of your principles.

He's definitely out of the job, so good for his soul. He's ready to get right out of government so he won't have to be tainted while fixing the mess. He said he had some "good news": That gum you like is going to come back in style. Also, he says, our government is a complete wreck:

Our presidency has been debased by a figure who has a seemingly bottomless appetite for destruction and division and only a passing familiarity with how the Constitution works.

And Congress has completely given up on trying to stop the president, and many members are "willing accomplices to this calamity." But wait, how is that supposed to be good news? Flake explains his seeming paradox:

We may have hit bottom.

(Oh, and that’s also the bad news. In a rare convergence, the good news and bad news are the same — our leadership is not good, but it probably can’t get much worse.)

This is it, if you have been wondering what the bottom looks like. This is what it looks like when you stress-test all of the institutions that undergird our constitutional democracy, at the same time. You could say that we are witnesses to history, and if it were possible to divorce ourselves from the obvious tragedy of this debacle, I suppose that might even be interesting, from an academic perspective. The way some rare diseases are interesting to medical researchers.

In other words, Jeff Flake sounds like a dreamy-eyed optimist here. He asks, again and again, what could have brought us to such a state, but somehow never quite gets around to saying anything about nearly four decades of Republican insistence that government can't ever solve problems, because government is the problem. Donald Trump's greatest offense is simply that, like an idiot, he went and said all the quiet parts of the GOP agenda out loud.

To be sure, Flake did at least diagnose one of the biggest problems with the current guy, although Flake treats this as if it were something unique to Trump:

Who would have thought that we would ever see encouragement coming from the White House for chants at rallies calling for the jailing of a defeated political opponent. When you don’t even know that there are limits on presidential power, then you might not even care when you are abusing that power.

Nope, can't see how eight years of freakouts over Barack Obama being a Kenyan Muslim who was never really president could have anything to do with this. Or the panic that when he encouraged schoolchildren to work hard, he was secretly seducing them into socialism. A million hearings into Benghazi -- did Hillary or Obama give the stand down order that never happened? -- may have had something to do with it, too. But Flake kept asking:

How did this happen to us? And what might we learn from it? How did we get swept up in this global resurgence of the authoritarian impulse [...]

Have we really grown tired of democracy?

Flake even did a very timely Jeff Foxworthy riff on the matter:

Damn right! Don't fall for a tyrant who sees political victory as the only worthy goal. Support the integrity of our sacred institutions! Very inspiring talk from a guy whose party's top leadership pledged itself on Barack Obama's inauguration day to the single goal of blocking everything he did, for the sake of making Obama a one-term president.

Because this nomination has the potential to so dramatically shift the balance of the court, I continue to believe that the Senate is fully justified in waiting until the presidential election before proceeding to fill the seat.

So yes, he was all for democracy, as long as democracy gets us a nomination we like. But until then, nothing doing. Ever the supporter of the rule of law, Flake added that if Hillary Clinton won the election, well, fine, the Senate could confirm Obama's nominee in a lame-duck session, since Clinton would probably appoint someone more liberal.

A fucking profile in courage, this guy. Still, Flake at least had some sage advice to Harvard's newly minted lawyers, who had voted to have him address them:

Recognize the good in your opponents. Apologize every now and then. Admit to mistakes. Forgive, and ask for forgiveness. Listen more. Speak up more, for politics sometimes keeps us silent when we should speak.

And if you find yourself in a herd, crane your neck, look back there and check out your brand, ask yourself if it really suits you. From personal experience, I can say that it’s never too late to leave the herd.

Maybe too late to take any responsibility for all the trampling you personally did, but still plenty of time to get a good consulting job and start building a war chest for a later run as a "reformer." A reformer who says his core political beliefs haven't changed at all.