Jeff Sessions Is Beautifying Everything, Starting With The Schmutz In Poor People's Wallets 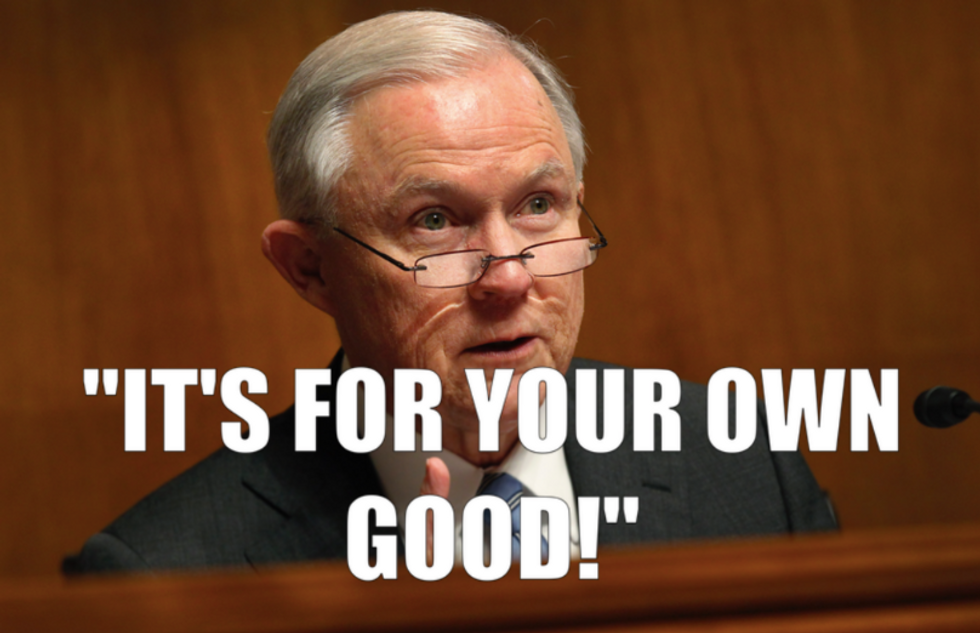 In Washington DC, the money that pays for road crews to sweep the streets of the homeless comes from the city's beautification program. We assume Jeff Sessions found out about this and thought to himself "Man, I wish I'd come up with that first" and is now stealing it shamelessly, because apparently when they said they were going to clean up extra regulation they meant all of it at once, and they think this is good!

Things are going to be real pretty, too, without the 25 pesky regulations he's just canceled, like "don't fine poor people to pad out your budget if you can avoid it" and "try not to discriminate too much against people with disabilities" and "maybe be a little bit less racist" and my favorite, "don't fine minor children too heavily seeing as how they don't really have good jobs and whatnot."

Oh, and also there were a bunch of ATF things in there too, like "if you're going to buy a lot of explosives you should store them properly" which, you know, that's good. It's a good thing to cut red tape on the purchase of explosive materials, because Freedom. Freedom and Liberty.

This is one of those things where you can't be surprised, because it's not like they didn't tell us, but you still have to take a second and process just what sort of a human it takes to reach a seat of power like Jeff Sessions has and think to yourself, "you know, fuck Robin Hood, though. And service animals. Fuck service animals."

This, of course, follows Sessions's November announcement that he was going to gut the DOJ like a fish or whatever, we don't remember his actual words because they were fucking dumb, but he meant "make drastic and sweeping changes that will specifically fuck over poor people and minorities and definitely gay people hurrah!"

This comes alongside the cuts in CHIP, and the new rules about tipping that will allow employers to skim more easily from tipped staff, and just generally we should remind you that fucking Ben Carson is in charge of housing, so there's that.

Sessions remains impossible to place, because he is some kind of cringing antihero sidekick but I just can't quite decide which one he is. Definitely the Sheriff of Nottingham as far as law enforcement goes, but I'm not sure if he's more Gollum or Smee.

YOU be more poor, so we can be LESS! Deal? Great!