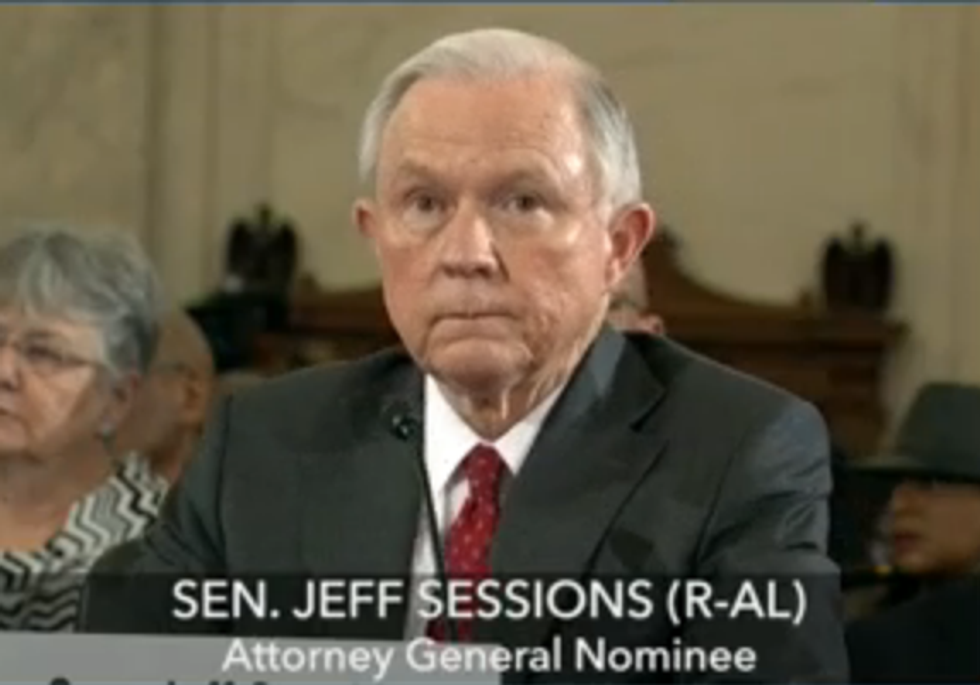 Hands where we can see them, sir.

Have you been enjoying Jeff Sessions's confirmation hearing, where Democrats have been asking good questions, and Republicans have been giving Sessions every opportunity to deny he was ever a gross, racist, sexist homophobe, because that's just silly? (It's not silly.)

One of the REAL WEIRD questions today came when Utah Republican Sen. Orrin Hatch referred to pornography as a "public health" concern and asked what Sessions would do about it as attorney general. In his answer, Sessions said he'd consider re-establishing the Obscenity Task Force in the Justice Department, originally established in 2005 during the Bush administration, for the purpose of going after all the dirty dirty. He confirmed that he would enforce obscenity laws, and also said he didn't realize the porn-loving Democrats had gotten rid of the task force in the first place.

So is Sessions really going to go after your precious porns? MAYBE. Noted softcore porn star Donald Trump has pledged to crack down on the porns. Other members of Trump's transition team, like Ed Meese and Ken Blackwell of the Family Research Council, are also crusaders against porning, and one of Trump's top picks for the Supreme Court, William H. Pryor, Jr., has in the past supported putting people in jail for doing the gay buttsex. (Even though he MAY have done some porning of his own, oh my stars!) Oh, and also Mike Pence, the evil, anti-gay, anti-sex scold, is going to be our vice president.

You see the bait-and-switch, just in the three questions we picked out? The casual conflation of separate issues? It's because these folks literally believe they're the same. From that crazy WorldNetDaily interview, here are the words of Donna Rice Hughes:

Okey-doke, you bet! "Scientific data." The anti-porning lady didn't get all her questions asked in the hearing, but the fact that Sen. Hatch asked about it and Sen. Sessions was like SURE WHY NOT probably made her very happy!

And she should be happy, since she saved the world from President Gary Hart. Because yes, that is the same Donna Rice, now Donna Rice Hughes, who sailed The Monkey Business with him, and later spokesmodeled for No Excuses jeans.

But maybe a coming Sessions anti-porn crusade wouldn't actually go that well for the morality police! Consider this amazing paragraph from the same Salon article, describing the first obscenity prosecution in over 20 years, under Bush's Justice Department in 2008:

Haha, Salon printed the words "milky butt stuff." (To be fair, it's a reprint from Alternet.)

(Haha, we said "handy," because that is what you are giving your junk when you watch your porns! ALLEGEDLY!)