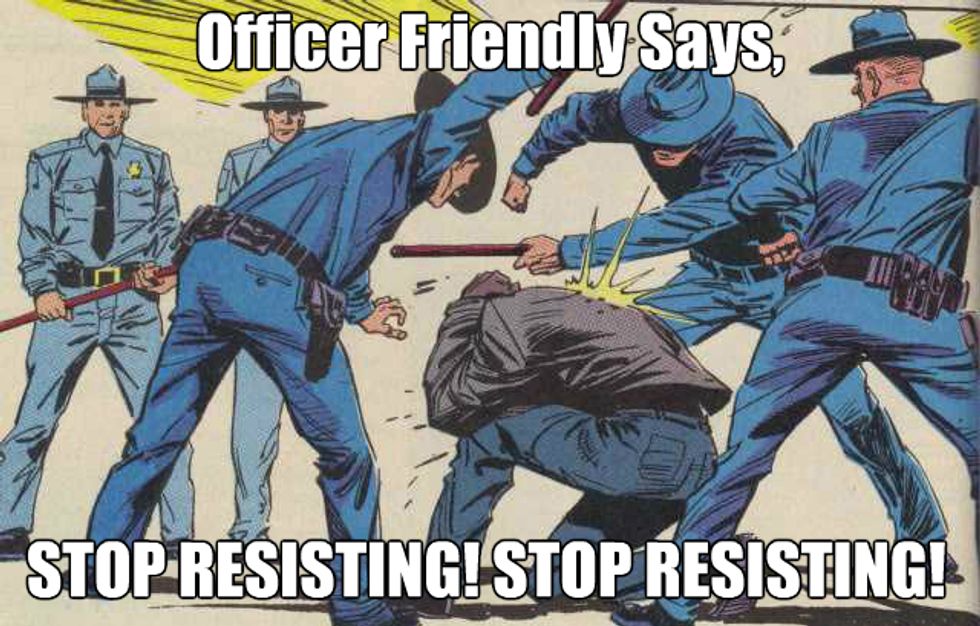 Attorney General Jeff Sessions (excuse us while we clean the vomit off our keyboard here) has ordered the Justice Department to take another look at its consent decrees with dirty police departments nationwide, to make sure the agreements for police reform won't interfere with the Trump administration's goal of letting cops bust as many heads as they need to in the name of Law And Order. A two-page memo Sessions released Monday calls for a review of all Justice Department interactions with local police departments, including consent decrees, to ensure they comply with Trump administration goals of supporting law enforcement instead of showing too much deference to those filthy citizens who keep getting in the way of truncheons and bullets.

The memo calling for a department-wide review was released shortly before DOJ civil rights attorneys requested a federal judge delay until June a hearing on a consent decree that would reform Baltimore's police department.

“The Attorney General and the new leadership in the Department are actively developing strategies to support the thousands of law enforcement agencies across the country that seek to prevent crime and protect the public,” Justice officials said in their filing. “The Department is working to ensure that those initiatives effectively dovetail with robust enforcement of federal laws designed to preserve and protect civil rights.”

Gotta be supportive of police departments, or cops' sensitive fee-fees might be hurt and the crime rate might skyrocket. Oh, yeah, and sure, civil rights and shit matters, too. Considering that under Barack Obama and Attorneys General Eric Holder and Loretta Lynch, the DOJ opened 25 investigations of police departments and other law enforcement agencies, and is enforcing 14 current consent decrees, that's a whole lot of progress the Sessions DOJ will have to try to undo. Not surprisingly, civil rights advocates don't seem to understand that allowing police a freer rein to Git Tuff on Crime is the only thing that will prevent us from descending into anarchy. Or at least anarchy that doesn't favor the police:

“This is terrifying,” said Jonathan Smith, executive director of the Washington Lawyers’ Committee for Civil Rights and Urban Affairs, who spent five years as the department’s chief of special litigation, overseeing investigations into 23 police departments such as New Orleans, Cleveland and Ferguson, Mo. “This raises the question of whether, under the current attorney general, the Department of Justice is going to walk away from its obligation to ensure that law enforcement across the country is following the Constitution.”

Silly lawyer! There's not really a question there at all, is there?

The request to delay the hearing on Baltimore's consent decree asks the judge to allow the DOJ an extra 90 days to ensure it's in line with "directives of the President and the Attorney General," like never acknowledging such a thing as systemic discrimination exists, because everyone knows all discrimination is limited to a few bad apples on the police force, not the whole damn barrel. The requested delay drew fire from Obama DOJ lawyers who negotiated it, like former head of the Civil Rights Division Vanita Gupta, who called it "alarming" and said it "signals a retreat from the Justice Department’s commitment to civil rights and public safety in Baltimore." For that matter, city officials in Baltimore aren't too crazy about it, either:

Baltimore Mayor Catherine E. Pugh also said she and Police Commissioner Kevin Davis oppose the delay. “Any interruption in moving forward may have the effect of eroding the trust that we are working hard to establish,” Pugh said.

Now here's a big fat donut-fed surprise: The head of the Baltimore police union, Gene Ryan, is over the moon with how supportive Jeff Sessions is of the thin-skinned blue line -- he explained that while his chapter of the Fraternal Order of Police favors reform, he's worried the consent decree may have been too hasty. Wouldn't want to rush into any measures that might prevent cops from tossing troublemakers into the back of a van and giving them a spine-severing rough ride to teach them a lesson, after all.

Donald Trump has a plan to stop crime, and it all depends on One Tough Cop. Wish Trump had gotten his name.

In addition to requesting time to review the Baltimore consent decree, Sessions's new call for the DOJ to play nice with dirty police departments may also weaken an ongoing investigation of Chicago's police department. An investigation of the CPD under Lynch's DOJ found routine violations of civil rights and excessive force used by cops toward minorities, but it's unclear what action, if any, the Justice Department may take under Sessions. It all depends on whether President Trump (nuts -- there goes another keyboard!) can scare up the name of that one top Chicago cop who told him how to end the city's crime problem in a week.

Yr Wonkette is now reader-supported, which means no more ads, which means we need you to click the clicky below this article to keep us going. Stop resisting the urge to send us money!