Jeff Sessions To Come Clean With Senate Intel Committee, By Not Answering Any Questions 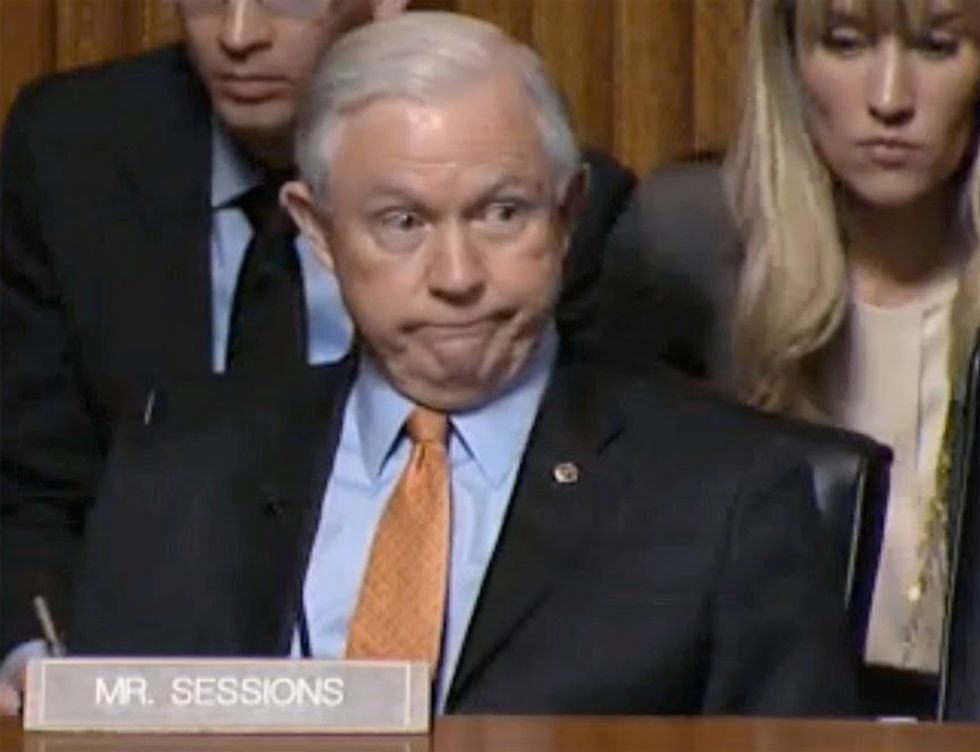 He reckons he can't answer your questions.

Great news! Attorney General Jeff Sessions will be publicly testifying before the Senate Intelligence Committee on Tuesday afternoon! Now we will finally know the truth about the Trump-Russia investigation and Sessions's role in the firing of FBI director James Comey, because Jeff Sessions has a real good track record of being honest with Senate committees these days, especially where the word "Russia" is involved. So ... hooray! Jeff Sessions! ALL THE TRUTH-TELLING!

Oh that is some horseshit. He's going to invoke executive privilege when it comes to questions about how he and Donald Trump colluded to fire James Comey for investigating Trump's Russian ties, an investigation Sessions is supposedly recused from.

During James Comey's explosive testimony on Thursday, he planted a surprise truth-bomb about how he never told Sessions about Trump's inappropriate, justice-obstructing advances on him, because all the higher-ups he consulted with back in February agreed Sessions was probably about to have to recuse himself from the Russia investigation anyway, because they knew things that would make his continued involvement "problematic." Secret things. Classified things.

After Comey's open hearing, he went for a private session with the Senate Intel Committee, where he reportedly told them about ANOTHER meeting with the Russian ambassador that Sessions may have failed to disclose (this meeting maybe?), on top of the other meetings he failed to disclose in his confirmation hearings. Within about eight seconds after the conclusion of that session, the Senate Intel Committee was like "GET THAT ALABAMA CRACKER OVER HERE, WE WANNA TALK TO HIM." Initially it was expected that he would testify in a closed session, but suddenly the Justice Department notified the committee that Sessions was just DYING to do an open hearing, because he really felt like he should clear the air with the American people:

"The Attorney General has requested that this hearing be public. He believes it is important for the American people to hear the truth directly from him and looks forward to answering the committee's questions tomorrow," said the department's Sarah Isgur Flores, in a statement relayed by NPR's Carrie Johnson.

Apparently he will be clearing the air by saying "No comment" and "WHOA IF TRUE but I reckon I cain't talk about that" and "SHHHH, BE VEWY VEWY QUIET, I AM HUNTING WABBITS!" Sounds just fucking great.

Josh Marshall at Talking Points Memo thinks this is a big fuckin' deal, considering Comey's little whispers to the nation on Thursday about how Sessions might be G-U-I-L-T-Y:

The obvious question arises: what did Comey’s team know two weeks prior to Sessions’ surprise recusal?

In his public testimony Comey went considerably further. Again, the key quote: “Our judgment, as I recall, is that he was very close to and inevitably going to recuse himself for a variety of reasons. We also were aware of facts that I can’t discuss in an opening setting that would make his continued engagement in a Russia-related investigation problematic. So we were convinced — in fact, I think we’d already heard the career people were recommending that he recuse himself, that he was not going to be in contact with Russia-related matters much longer. That turned out to be the case."

This involves some inference and speculation. But it seems clear to me that Comey was revealing things that were not at all necessary to answer the question at hand, much as he had in his prepared testimony.  [...]

Whatever the information is ... It sounds like something that seriously compromises Sessions’ role with a Russia probe and that Comey felt it was important to get out.

The hearing has been scheduled for 2:30 PM Eastern, which is a different time if you live in other time zones. Will we be liveblogging? MAYBE PROBABLY WE GUESS. So be here!

Wonkette is fully funded by readers like YOU. If you love us, click below, to fund us!