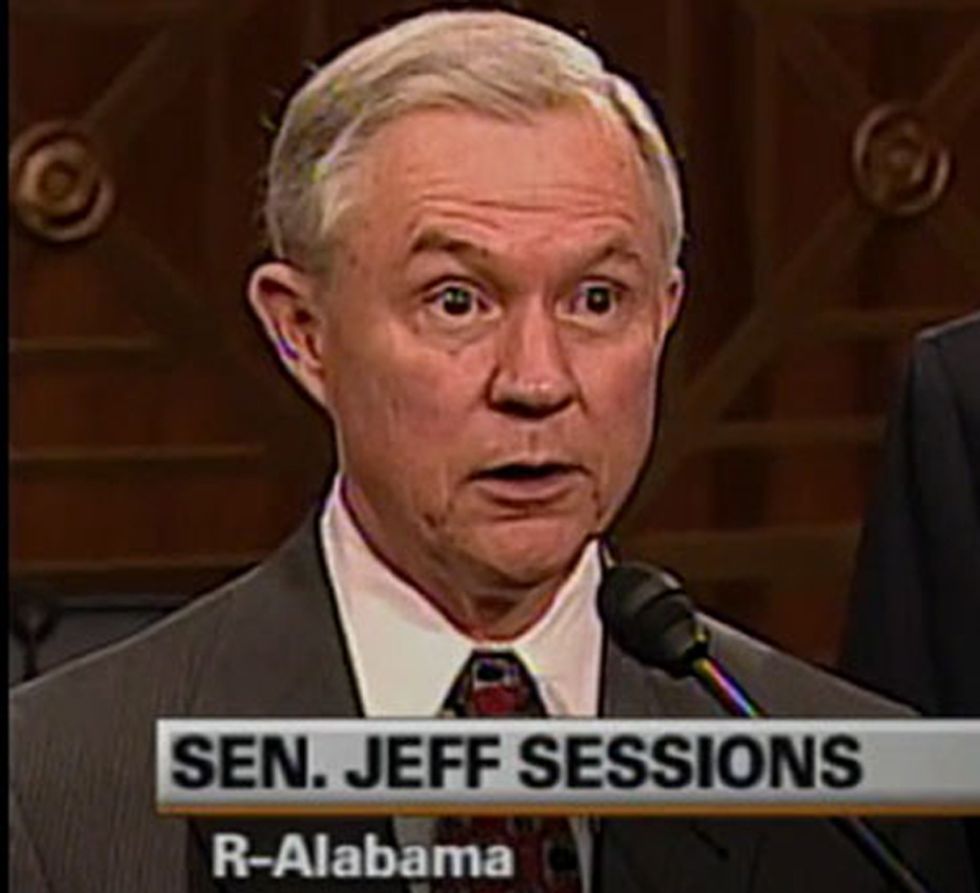 With Senate Judiciary Committee hearings underway on the nomination of Sen. Jefferson Beauregard Sessions III to be Donald Trump's Attorney General For White America, we'd like to take a few minutes to review the distinguished career of the man with the most stereotypical name for a Southern Senator in the modern era. Who is Jeff Sessions, and how will he Make America 1952 Again?

The main thing to remember about Jeff Sessions is that he's been here before, in front of the Judiciary Committee, when he was nominated to a federal judgeship by Ronald Reagan in 1986, and got sent home in shame when the Republican-controlled committee voted not to send him on to the full Senate. Why? Just a few things: As a U.S. Attorney, Sessions prosecuted three civil rights workers, including a former aide to Martin Luther King, on voter fraud charges, a case that was so bogus the jury tossed it out after four hours of deliberation. The New York Times has a detailed discussion of why Sessions thinks he was protecting voting rights against fraudsters, and why he's so very, very wrong.

Team Of Evils: Jeff Sessions Was Too Racist To Be A Federal Judge, But He Could Be Your Next Attorney General!

Yes, that election happened. And here's your proof that it's not just a bad dream.

During those same hearings, Justice Department attorneys testified that Sessions had called the ACLU and NAACP "un-American groups” that were “Communist-inspired,” and had complained the two groups had “forced civil rights down the throats of people,” one of the earliest uses of the throat-cramming trope. He was accused of calling a white civil rights attorney a “disgrace to his race” for taking voting rights cases, but insisted that was only a joke, ha-ha! A black former assistant US Attorney from Alabama testified Session had called him "boy" and cautioned him to “be careful what you say to white folks,” statements which Sessions denied having made.

You mean to say that Jeff Sessions isn't a civil rights champion? Knock us over with the proverbial feather!

More recently, Sessions has taken credit for prosecuting several voting rights and school desegregation cases when he was U.S. Attorney for Alabama; in an op-ed for the Washington Post, the Justice Department lawyers who actually worked those cases said Sessions's only involvement in the cases was to affix his signature to the work that they had done, a mere formality.

NAACP Leaders Arrested Protesting Super-Not-Racist Jeff Sessions, For No Reason At All!

If they're trying to appeal to Jeff Sessions's sense of shame, they may have the wrong target.

The board includes pre-1986 Mr. Snuffleupagus, Tyler Durden, Tony -- the man who lives inside the mouth of Danny Torrance in The Shining, Drop Dead Fred, Hobbes, and at least two six-foot, three-and-a-half-inch tall invisible rabbits.

Sen. Jeff Sessions would jsut like us to remember how tough on crime Donald Trump is: So tough he called for the execution of five falsely-accused teens!

More recently, Sessions has applauded the Supreme Court's 2013 gutting of the Voting Rights Act, and has blocked efforts to repair the provisions of the Voting Rights Act the Supremes struck down. Civil rights groups have held a sit-in in his Alabama office, and an interfaith coalition of religious leaders has protested his nomination as well. But he's got a lot of support from the REAL civil rights groups, police unions.

And let us not forget that during the campaign, Jeff Sessions praised Donald Trump as a terrific Law 'n' Order candidate, since Trump had called for the execution of innocent black teenagers in the Central Park Five case.

Trump Idiots: Really, Is 'Grabbing Them By The Pussy' Even *Wrong*?

Sen. Jeff Sessions can't figure out if it's sexual assault, and Trump campaign manager Kellyanne Conway is all PFFFFFT EVERYBODY DOES IT.

Sessions most recently made A Idiot of himself after recordings surfaced of Donald Trump bragging about how women would let him grab them by the pussy if he wanted. The good senator agreed Trump had used "inappropriate language," but wasn't quite sure grabbing a woman by the pussy is "sexual assault."

SESSIONS: I don’t characterize that as sexual assault. I think that’s a stretch. I don’t know what he meant --

THE WEEKLY STANDARD: So if you grab a woman by the genitals, that’s not sexual assault?

SESSIONS: I don’t know. It’s not clear that he -- how that would occur.

Oh, but that's just the most recent example of Jess Sessions being a tad clueless on the Ladies. He voted against reauthorization of the Violence Against Women Act in 2013. During his confirmation hearings today, Sessions explained he'd supported an alternative version of VAWA that didn't include a provision allowing prosecution of non-tribal members in tribal courts, which he said in 2013 "subject[ed] American citizens to trial in a sovereign tribal court, the personnel of which have no democratic accountability to the American public." So don't you go saying he supports violence against women -- he just doesn't support tribal courts handling such cases if the defendant is a white guy kicking the shit out of his Native American wife, so there.

How About The Gays?

Oh, this one's easy! Sessions voted against the repeal of "Don't Ask, Don't Tell," opposed marriage equality (although he said in his testimony today the Supreme Court's decision to make it the law of the land was indeed final), and voted against the Matthew Shepard/James Byrd Hate Crimes Prevention Act and its extension of federal hate crimes law to cover crimes motivated by gender, sexual orientation, or disability. He had a great reason for opposing that one, saying he just wasn't sure it was a big problem, really: “I am not sure women or people with different sexual orientations face that kind of discrimination. I just don’t see it.” If he didn't see it, then it must not be much of a problem!

Oh, Yeah, Immigration -- We Bet He's A Peach On That

Jeff Sessions isn't merely against fixing our immigration system with any policy involving a pathway to citizenship, he wants the DREAM Act kids to go away, and he's not much of a fan of legal immigration, either. After the Senate nonetheless passed a comprehensive immigration bill in 2013, Sessions made it his business to kill the bill in the House. He distributed to House members a 23-page handbook chock-full of anti-reform talking points, starting with this blunt instrument of a paragraph:

“Immigration reform” may be the single most abused phrase in the English language. It has become a legislative honorific almost exclusively reserved for proposals which benefit everyone but actual American citizens.

Sessions also helped craft Trump's immigration "plan," such as it was, and the Trump transition team is fairly crawling with people from Sessions's Senate staff, especially in areas involving immigration.

Any Other Notable Jerkface Moments?

Alabama Sen. Jeff Sessions: Are There No Workhouses?

We only have the one column here, so we'll stick with the WonkArchives: In 2013, Sessions distinguished himself by complaining that there were simply too many people on food stamps, because the USDA was making an effort to make sure eligible families got the benefits they qualified for:

“It has become sadly clear that Agriculture Secretary Vilsack wishes to make welfare part of the normal American experience, with no regard for social or economic consequences. How else can you explain why he gave an award to a recruitment worker for overcoming the ‘mountain pride’ of rural Americans?” Sessions told The Daily Caller, recalling one of the many outreach efforts the USDA has engaged in over the years to get more people on SNAP.

Shame on the big mean government for refusing to recognize Americans' basic dignity and determination to let their kids go hungry rather than get help.

Republican Senators: Can You Explain Climate Change To Us, EPA, So We Can Not Believe You Some More?

Also, there's this fun fact: in 2015, Sessions demanded the EPA make scientists available for questioning on why they were making up so much fake science on climate change. He insisted that CO2 is nothing but harmless plant food, that there's been a decades-long "pause" in global warming (there is not), and badgered the head of the EPA about why she wouldn't give straight answers to his loaded questions. Fun times!

So there's your next Attorney General, kids. Maybe he won't be confirmed, but don't bet on it.