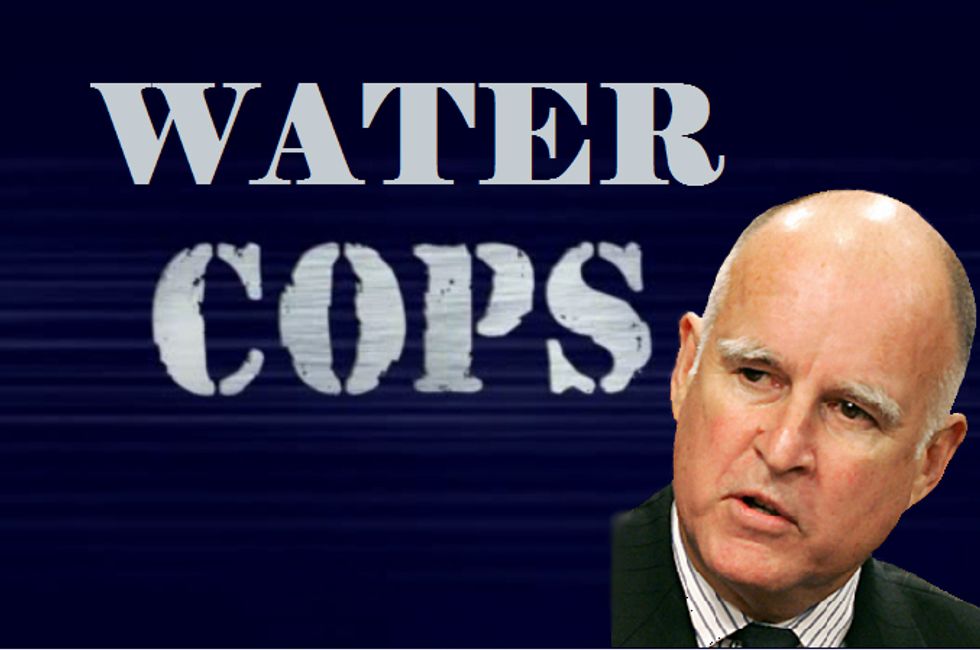 California Gov. Jerry Brown has signed a lawless executive order (they're all lawless) imposing mandatory water restrictions on the oppressed people of the Golden State, which is pretty much what they asked for by being a bunch of Left Coast nanny staters.

Brown announced draconian measures to cut water use by 25 percent, such as using taxpayer funds to encourage takers to replace their lawns with desert landscapes, creating a "temporary" rebate program to encourage people to replace perfectly good old appliances with new, "more efficient" ones that won't get your clothes clean, and why should poor people even have appliances, we want to know? Also, Brown will ban private enterprise in the state by telling golf courses and cemeteries how much they can water their grass -- even on the graves of military veterans! Did We The People fight Hitler after he bombed Pearl Harbor just to let our vets' graves turn brown? I think NOT. Next he'll be posting cops in our bathrooms to make we also adhere to the "if it's yellow, let it mellow; if it's brown, flush it down" rule, when he should be sending them to make sure no men in dresses are peeing in the ladies' rooms. What has this country come to?

Brown made the announcement in a dramatic mountain setting, saying, "Today we are standing on dry grass where there should be five feet of snow. This historic drought demands unprecedented action." So Jerry Brown, Mister Save The Planet, drove to the mountains to say there's not enough water to wash our cars? We bet his windshield's clean!!!

We're having a hard time believing this liberal claim that there "wasn't enough snow in the mountains" this year. Sounds to us like another warmist lie, like "climate change." Just a few weeks ago, wasn't the liberal media showing us "record snowfalls" in the liberal bastion of Massachusetts? Which is it, libs? Too little precipitation or too much? Besides, whenever you turn on the tap, water still comes out. That doesn't look like much of a water shortage to us!

The water shortage can't be real anyway, since there seems to be plenty of water for agriculture, which uses 80 percent of California's water but only accounts for 2 percent of the state's GDP.

We bet we know where all the water is going. The illegals are taking it with them when they sneak across the border to join ISIS cells in New Mexico.