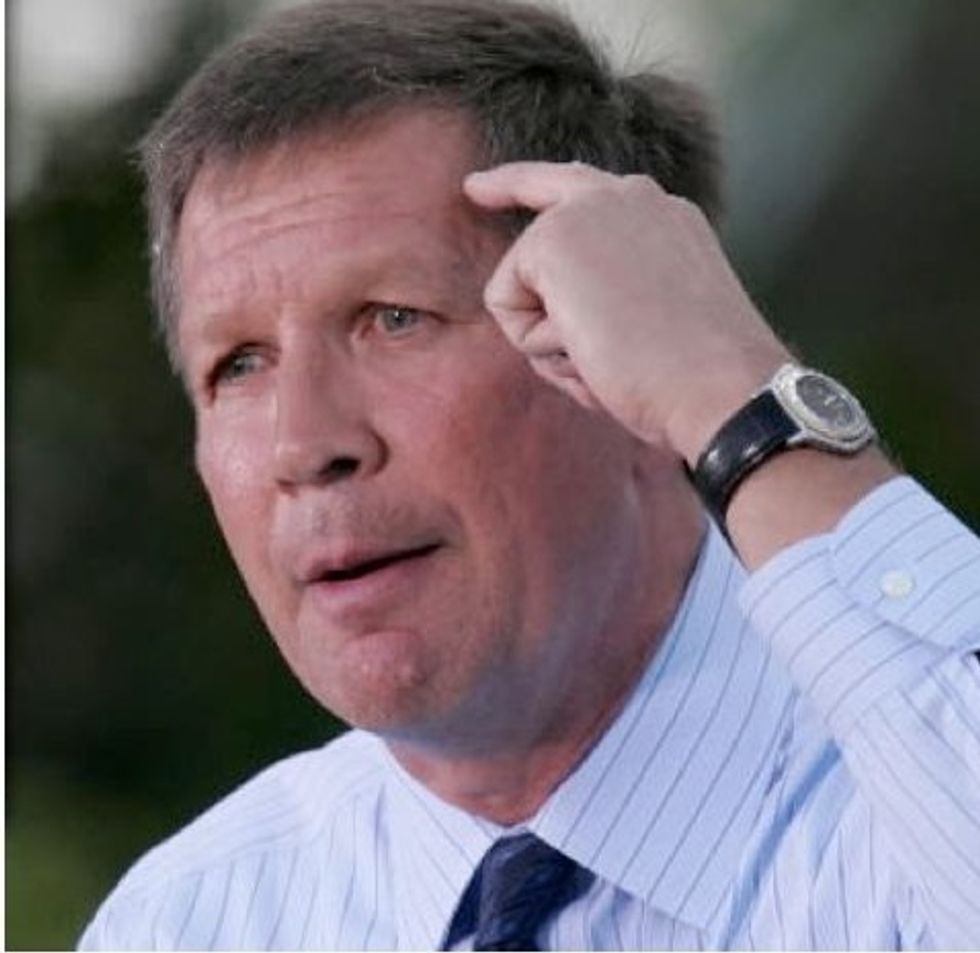 So here's a terrific idea to help At Risk Youth (you know, poor kids) overcome the problems of poverty: get them into a mentoring program, so they can learn skills for success and learn gooder in school. And so, with a bit of fanfare and a photo op surrounded by underprivileged kids and their smiling teachers, Ohio Gov. John Kasich went to a Cleveland elementary school in June to sign into law a bill that would provide $10 million in funds for mentoring. Yay, kids and success! Oh, and also, if schools want to participate in the mentoring program, they'll have to partner with a business -- because entrepreneurs made America great, we guess -- and also partner with a church or other faith-based group, according to a report by Cleveland.com:

No business and no faith-based partner means no state dollars.

"You must include a faith-based partner," United Way of Greater Cleveland President Bill Kitson, told potential applicants at an information session the United Way hosted Thursday here in Cleveland.

Kitson sits on Kasich's advisory panel for the program, called "Community Connectors," which is taking applications for grants now.

You see, the faith-based part of this is just absolutely vital for the program to work right, although it also goes beyond what the legislation specifies.

Buddy Harris, of the Ohio Department of Education, explained at the information meeting that you just have to have a church or religious non-profit involved for mentoring to work, because you do:

"The faith-based organization is clearly at the heart of the vision of the governor," Harris said after the session.

"We do not forsee any proseletyzing happening between mentors and students," Harris said. "That's not really what we're seeking."

Got it? There won't be any churchy stuff going on, but the program simply won't work without the partnership of a church, presumably because Jesus Magic is why people become successful:

Asked why the governor is mixing religion with a state program - items usually required to be kept separate - Kasich spokesman Rob Nichols said: "The governor believes faith-based organizations play an important role in the lives of young people."

And Kasich's recorded video welcoming the applicants made the importance he places on faith in this effort clear.

"The Good Lord has a purpose for each and every one of them (students) and you're helping them to find it," Kasich said on the video.

Now, Yr Dok Zoom is no lawyer, but this seems a bit hinky on First Amendment grounds -- even though there's no state money going to the churches, the requirement to partner with a church sounds a heck of a lot like an endorsement of religion, maybe? Ohio ACLU, you on this?

The involvement of faith-based groups in the program morphed from an option in the planning stages into a requirement in the actual implementation. When Kasich proposed the mentoring program in February, he simply called it

an initiative to support the best ideas for bringing together schools, parents, communities, faith-based groups, businesses and students in mentoring efforts based on proven practices.

The legislation authorizing the program also simply allowed faith-based groups to participate, but didn't require their inclusion. Now, however, to get any of that sweet sweet mentoring money, schools absolutely must partner with a faith-based group, because priorities.

Fun fact: Several existing mentoring programs in Ohio -- you know, the ones that embody those "proven practices" that Kasich touted in calling for a state-funded program -- would not qualify for the new funding, since they don't have an explicit partnership with a church. Obviously, the Kasich administration just knows that they could be better with a rectal infusion of Jebus.

Dare we hope that the Satanic Temple that will come forward and offer to partner with some lucky school in Toledo? Kids would definitely learn a thing or two in that mentoring program.