'Jill And Jessa: Counting On' Finale: Our Long National Nightmare Is Over At Last 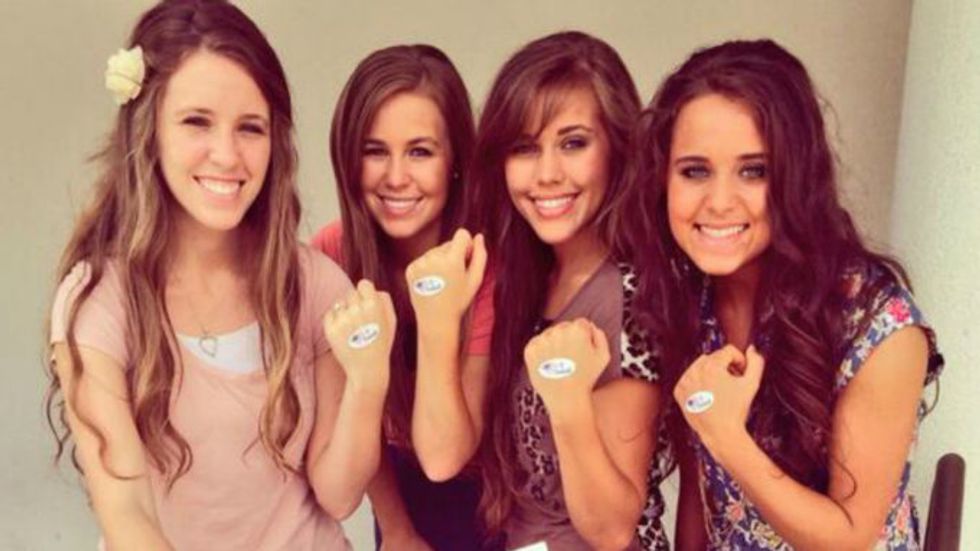 even the duggar girls are happy this thing is done.

We regret to inform you that the latest iteration of the Duggars, "Jill and Jessa: Counting On" has not yet been cancelled. Turns out prayers don't do shit. Perhaps we need to start making blood sacrifices to minor demons in order to make this pain cease.

Side note: do you think that the Duggars are sad that Ted Cruz isn't going to bring his creepy brand of end times fetishization to the White House after all, or was he too liberal for them?

We open in the still-undisclosed-but-no-doubt-super-terrifying Central American location where Jill and Derick are currently god-bothering the natives. A portion of the Duggars has come down to visit. Not the full complement of Duggars, mind you, but enough to need their own truck.

Everyone has to yammer on about how it has been a whole six months since they saw each other. Since these people only mark time by noting what babies were baking or born when, everyone keeps explaining that the last time Jessa and Jill saw each other, Squashy Baby Spurgeon was still a precious pre-born.

It's finally time for the squashy babies to meet. Side by side, you can see that while Spurgeon is the younger of the two, he is wayyyy chubbier and squashier already.

We are treated to several straight minutes of Israel basically licking Spurgeon head to toe while Jill and Jessa look on and coo in unison.

What time is it? Time to recycle some past "19 Kids and Counting" footage, awwww yeah! Jill decides it is time to walk down memory lane and recollect going to Nepal to meet Derick when he was god-bothering in a different country. After a montage of those special times, the Counting On producers have to quiz each remaining unmarried Duggar lady child if she would travel halfway around the world to meet a dude. Verdict: Joy would for damn sure, Jana would prefer someone closer to home, and Jinger says she doesn't have to, which sends the off-screen producer into frantic questioning: IS THERE SOMETHING I DON'T KNOW???

One of the Duggar brothers -- fuck, we don't know which one. The one that looks most like a piece of turkey bologna? -- explains that it is normally their job to vet any potential suitors, but Derick was in goddamn Nepal, so they couldn't.

Jill and Jessa spend about 10 seconds looking at the (legitimately amazing) scenery before they dive back into explaining how much they miss each other and watching each other's squashy babies grow.

Uh-oh. We must have run out of footage about Nepal, so now we're reduced to old footage of Jill as a child. She was a lovely child, no trouble at all, bubbly, blah blah blah.

Jessa runs down the now-familiar litany of things to be afraid of in Central America: violence, the water, scorpions. Jill adds to the trail of terror and tears: broken families, mud huts. It doesn't seem that the DuggarDillard ministry seeks to abate any of these socioeconomic issues or help in any tangible way. Instead, the sisters all gather to sing a song about how Jesus loves them. They do this, Joy explains, because "these people here, they love singing." OK then.

The singing is atonal and whiteness personified, but it allows for ANOTHER trip down memory lane to the girls having a fiddle party back on "19 Kids."

Jill yammers at the assembled women for a few minutes about how women get tired because of children and responsibilities, which is a thing that I am sure these Central American ladies did not know until a Duggar came to tell them about it. This is, in turn, an opportunity for the Duggar siblings to praise Jill even more for the depth and breadth of her ministry.

And just like that, we're done. That was a conference?? It basically looked like a lunch with cast-off Valentine's Day plastic tablecloths. It seems to have lasted all of an hour or so.

REMINISCING AGAIN OH DEAR GOD MAKE IT STOP. Jessa is amazed that only two years ago, she and Jill were making wedding plans. Are these people goldfish? Do they lack object permanence and literally forget who they are and what they've done from one minute to the next? That can be the only explanation for their constant excitement and amazement at reliving their own very recent (and very dull) history.

This time, we're treated to Derick's proposal to Jill, which we already saw on "19 Kids." It involved a fourth date musician singing a song he and Derick wrote about the magic of the Jill-Derick connection. We are reminded of the fact that Dillard didn't just set up a random country dude to sing the proposal song. Random country dude came with another stringed instrument player AND a dude that played maracas or some shit.

Now we have to relive the actual Jill-Derick wedding prep and both Jill and Derick explain how hard it was to hold off on that super-special first kiss. We get to see creepy teary-eyed Jim Bob explaining how hard it is to go have his daughter live somewhere else.

You guys, this is literally nothing but old footage stitched together with a few seconds of voiceovers and explanations. It is sort of impressive how TLC has managed to leverage just using the same shit again and again. Wonder what ad buys cost during this show.

Sweet Wedding Memory Time is finally done. Now we're back in Central America so Derick and Jill can explain how they want to adopt a brown baby. Jessa also wishes to possess a brown baby. White savior complex is creepy in many adoption situations, but doubly triply quadruply so where the Duggars are concerned, because you know they just want the brown baby as an accessory/child to be converted. Indeed, we have to ask six or eight other Duggars if they also too wish to own a brown baby and they're all pretty enthused about the concept.

Oh god this orphanage they're all hovering around is really just a baby pipeline for creepy Christians isn't it? But before we see Jill and Derick abduct a child from the orphanage, we have to hop back to some of that sweet sweet "19 Kids" footage to remember the blessed day when Jill found out she would soon be squeezing out Squashy Baby Spurgeon.

Whiplash back to the present, where Derick has roped a bunch of people into playing soccer because people in Central America and "the world" love soccer, and if he is going to live outside the United States, he must learn soccer. It's desperately insincere because you can tell he only cares insofar as it will help him god-bother people all over.

We are "treated" to a Duggar versus Central Americans soccer game which leads to talking about how Squashy Baby Israel loves soccer which leads to...old footage of Jill pushing Israel out of her vag. She wanted to squeeze him out at home, but they eventually had to go to the hospital. Here is a picture of Jill 60 (!!) hours into her labor while Derick stands behind her and explains how labor works (no, really.)

Also completely revelatory: it was hard and sad for Jill and Derick to leave for the wilds of Central America because they will miss their family. Just once we'd like these people to say something slightly off-kilter or shocking

WAIT A SECOND THIS IS THE SEASON GODDAMN FINALE AND STILL NOTHING MORE ABOUT JOSH DUGGAR????  This is fucking unfair. We watched a whole season of this show waiting to see when they'd trot a tearful Josh out so his sisters could fawn over him and explain that it was really their fault he molested them. Instead of that, we just get a boring wind down where the passel of Duggars take their leave of Central America, presumably without any abducted brown babies.

And then we're done. There's the obligatory check in with Jill and Derick to see when they might personally contribute to population overload (answer: soon) and we see the truck carry the rest of the Duggars away, and...fin. No word yet on a second season. Please begin praying to your personal God/Devil/Humanist Hero Neil DeGrasse Tyson/whoever that this thing is not renewed.