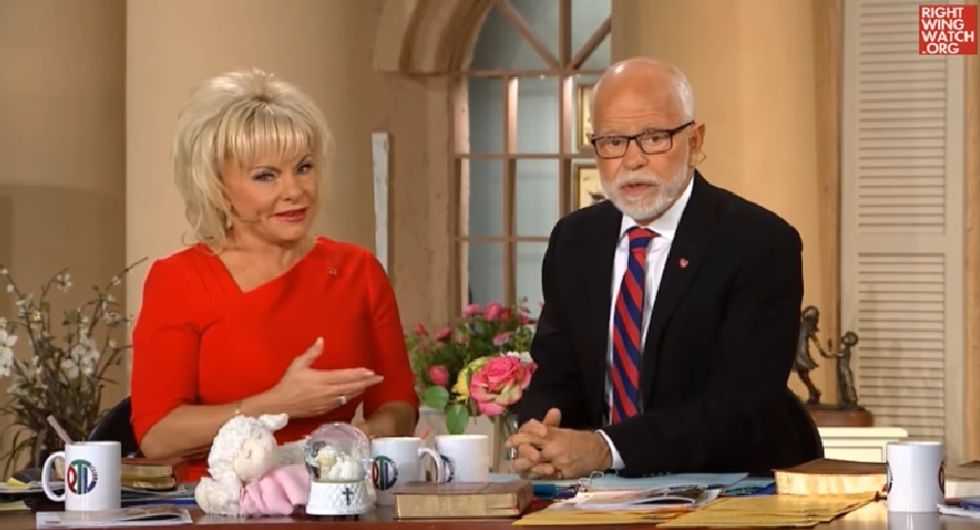 The Reverend Jim "Stop Being Surprised I'm Still Alive" Bakker offered a compelling reason to to ban abortion: We have to, because while God is almighty, he's also kind of a klutz when it comes to actually bringing His divine plans to fruition. On Monday's edition of Bakker's cable Jesus show that we suspect is watched only by the staff of RightWingWatch, the disgraced old grifter pushed the Republicans' “Heartbeat Bill,” a measure whose supporters brag will make abortions illegal "before the mother even knows she’s pregnant," which sure sounds like a whole new frontier in informed consent.

And why do we need to ban abortion? Duh: to cure cancer. You see, Bakker explained, we're murdering so many babies these days that the Almighty Creator of the Universe, who knows when any sparrow falls in the forest with a sad feathery thud, simply can't predestine any wombs to bear the fruit that will eventually cure cancer:

I believe America is cursed if we keep murdering our babies. I believe we are doomed as a nation -- whatever you think, I don’t care, because I believe God says, ‘Thou shall not kill.’ And to murder our unborn babies, I don’t believe God can look [the other way]

Except for capital punishment for women who have abortions, we'll assume. And stoning gays and adulteresses to death, because those are definitely in the Bible. But surely you remember all the times the Bible condemns abortion, like in the Book Of Not Actually Mentioned At All.

Ever the humble cable teevee huckster, Bakker explained that if only more people watched his show, he could inform them of events that very definitely happened, and so we would see the light and stop aborting the babies who will one day grow up to cure cancer:

This program could be an important cog to stop abortion in this country [...]

The thing we have done in America, we have killed our babies. We have killed the future of America. I told you the other day about a story, someone said they asked God, "Why haven’t we had a cure for cancer?" And He said back, "I gave you two scientists that had the cure and both of them were aborted."

As of press time, the women who aborted the cancer-curing scientists have not been identified, but once they are, we bet they'll face a massive class action suit by survivors of people who've died from cancer. Maybe God will tell Jim Bakker who those terrible women were! Also, while he has the Almighty on the prayer-horn, he might ask -- humbly, of course -- how an omniscient being couldn't plan things out a little better and maybe sow lots and lots of people with cancer-cure sperms and eggs, or at least choose a womb that wouldn't ironically get emptied out. Also, maybe Jim Bakker could try not adapting his theology from an old episode of "The Twilight Zone."

Disappointingly, Bakker didn't give any credit at all to a young woman in Truth or Consequences, New Mexico, who in 1987 had an abortion that prevented the birth of a son who otherwise would have become a psychopathic serial murderer who would have put the Green River Killer to shame. God told us all about it and said, "You people really dodged a bullet (and an axe and a baseball bat) that time."

Still we would certainly encourage Our Heavenly Father to give it another shot and perhaps improve the odds by sending a whole a lot more cancer-cure scientist zygotes to wombs around the world, especially in the USA. Surely He knows we have enough dumbshit preachers already.

Yr Wonkette is supported by reader donations. Please click here or God will definitely think less of you. Or at least we will.