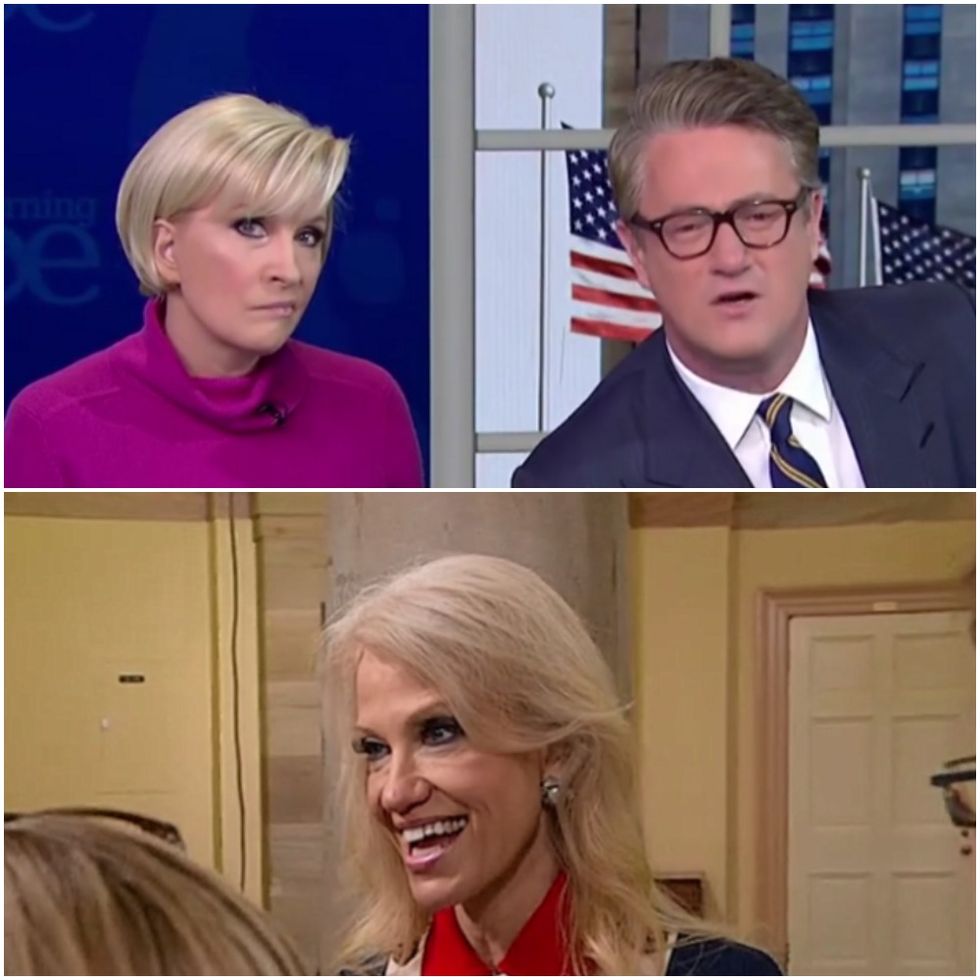 Kellyanne will never hang with the popular kids again.

Monday afternoon, in the hours before news broke that Donald Trump had graciously allowed former National Security Advisor Michael Flynn to kick his own ass out the door as a scapegoat in the Trump/Russia scandal (yoogest scandal since Watergate! impressive!), Kellyanne Conway told MSNBC that Flynn had Trump's "full confidence." In the space of that same hour, Press Secretary Sean Spicer told the loser fake news journalists who come see him every day that the president is "evaluating the situation."

So which was it? Did Trump have "full confidence" in Flynn, and was taken utterly by surprise when Flynn was like "Oh goodness, I feel I must resign for the good of America"? Or was Trump "evaluating the situation," getting ready to invite Flynn to throw himself under a bus later that night? COULD BOTH BE TRUE? WERE THEY BOTH LIES? It's the Trump regime, so let's just assume everything they say is a lie and work from there.

[wonkbar]<a href="http://wonkette.com/612694/joe-and-mika-finally-catch-whiff-of-autocracy-from-trump-white-house-and-it-is-adorable"></a>[/wonkbar]Well! Joe Scarborough and Mika Brzezinski, the flirtatious hosts of "Morning Joe" who sometimes act as informal advisors to Trump, are not having any of this nonsense! Fresh after a day where they finally saw flashes of autocratic behavior coming out of the Trump White House, in the form of Stephen Miller, the sanctimonious never-nude (allegedly!) senior Trump advisor who embarrassed the living shit out of himself on the Sunday shows, Joe and Mika have now noticed that Kellyanne Conway is a lying fuck who fucking lies. WHOA IF TRUE.

JOE: That are blatantly false!

MIKA: How many times?

A million times before breakfast? Moving on:

JOE: ... It happens time and time again, she goes out and lies. She GOES OUT AND LIES. And you find out about those lies a couple hours later.

MIKA: I don't think we could, I WILL NOT interview her.

JOE: Or if she's not lying ... she is -- actually what I've heard is -- so out of the loop. She's in none of the meetings and she just goes out without talking, without having the facts.

Hahaha, she is out of the loop because her office is up a flight of stairs from the Oval Office, and Donald Trump is a-skeered of the stairs, because he's a big old pussy.

Anything else? Perhaps something about how everybody in the White House hates Kellyanne Conway, and she is a pain in the ass liar who cries "SEXISM!" when she's caught in her lies?

MIKA: Whatever serves herself.

JOE: She doesn’t coordinate her message. And then she comes back in and they have to clean it up. Now, she will lie, as she does every time the truth comes out.

JOE: She will say she's being victimized.

MIKA: Because she's a woman.

JOE: She will then go in and get a picture with the president and then she’ll get the president to tweet something and her staff – his staff – will have to clean this all up over and over again.

Hey, remember that time Conway called the "Morning Joe" critters "sexist" for reporting news what had leaked out of the Trump transition team? Hahaha, good times! Joe and Mika remember when that happened.

Anyway, we love it when Joe and Mika agree with each other. It's like, you just know they probably had really good sex BEFORE work that day, perhaps with each other, not that we'd speculate on things that are obvious.

As "Morning Joe" helper Willie Geist pointed out during the broadcast, Conway has claimed the truth about the president's "full confidence" in Mike Flynn had simply changed in the hour between when she said her thing and Sean Spicer said his thing, but that ratchet-ass Pinocchio lady lies too much for us to believe anything she says, therefore screw her, this post is over.