Joe Arpaio Happy To Guard Black Churches, Whether They Want Him Or Not 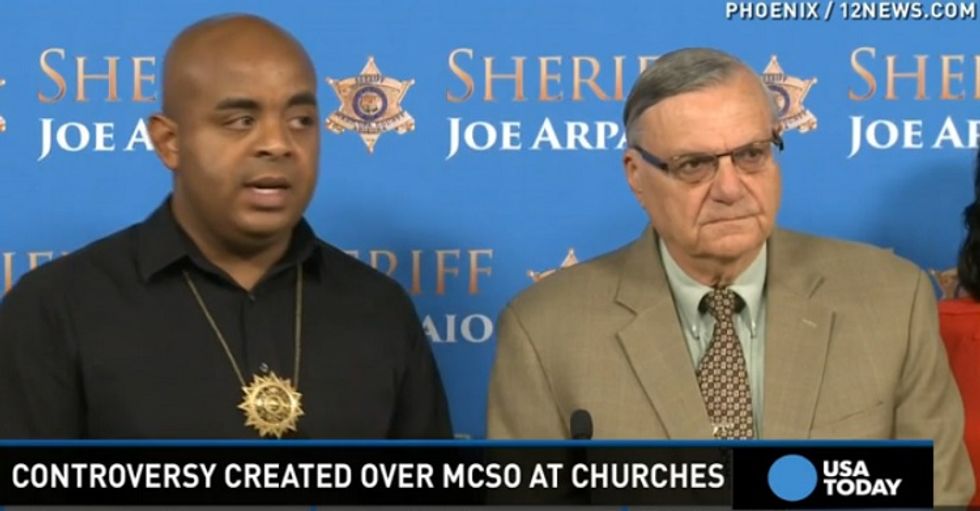 Maricopa County Sheriff Joe Arpaio, never one to let a good tragedy go to waste, stepped up in front of cameras this weekend and vowed to send armed patrols to guard black churches, although a number of Phoenix-area ministers protested the offer of "help" from a man who's being prosecuted for contempt of court in a racial profiling case.

Arpaio appeared at a press conference Friday with Rev. Jarrett Maupin, who claimed that at least 37 of 60 Arizona churches with African-American congregations had asked for protection. Arpaio announced that he would be sending patrols made up of both deputies and armed posse volunteers -- not including Steven Seagal, we guess -- to patrol outside churches. Can't imagine why anyone would have a problem with that collection of rustlers, cut throats, thugs, nitwits, halfwits, dimwits, vipers, and Methodists.

A number of Phoenix pastors responded Saturday that they did not want Arpaio's help, and that Maupin did not speak for the black church community.

The Revs. Reginald Walton of Phillips Memorial and Warren H. Stewart Jr. of Phoenix's Church of the Remnant were chief among those who questioned Maupin and Arpaio's intentions, asserting it was a publicity stunt geared toward bringing cameras and eyes to the pairing of a controversial sheriff and an outspoken reverend.

"Someone decided 15 seconds of fame is worth desecrating the memory of these people who stood on their faith, all for a camera op," Walton said. "You wouldn't see Martin Luther King uniting with Bull Connor. And that's what it feels like today."

Addressing Maupin and Arpaio's proposed posse protection, Walton simply said, "Thanks, but no thanks."

Rev. Stewart also told KPHO-TV that Arpaio had never spoken to him to offer security, and that if Arpaio had contacted him, he would have turned it down:

Phoenix political columnist E.J. Montini said that the partnership of Arpaio and Maupin seemed just a little too convenient and camera-ready:

I'd like to believe that everyone's motives in this are altruistic, but... There is a history of seeking publicity with these two.

Then again, who knows? Perhaps seeing a sheriff's vehicle outside a church or a uniformed posse member nearby will afford some measure of comfort for churchgoers.

It's just that the old sheriff and the young reverend really like media attention, and something like this will get them some. It already has.

Arapaio wasn't especially bothered by reports that maybe not all of Maricopa County's black churches really wanted his company, according to Montini:

Arpaio added, "I am the elected sheriff of this county, he (Maupin) asked me to help and I'm going to help."

Indications are that not all of the churches involved want posse members to be there. When told of one pastor's concerns Arpaio said at a press conference, "But I'll tell you he's going to get them (posse members) whether he likes them or not."

It's unclear whether Arpaio sent posse members to churches that had explicitly said "no thanks": one TV station said that sheriff's patrol cars merely circled the block around several churches, and that no deputies went inside churches, and Arpaio took to Twitter to note that the patrols were a Huge Success:

Well, are the cameras still around? That's the main question.