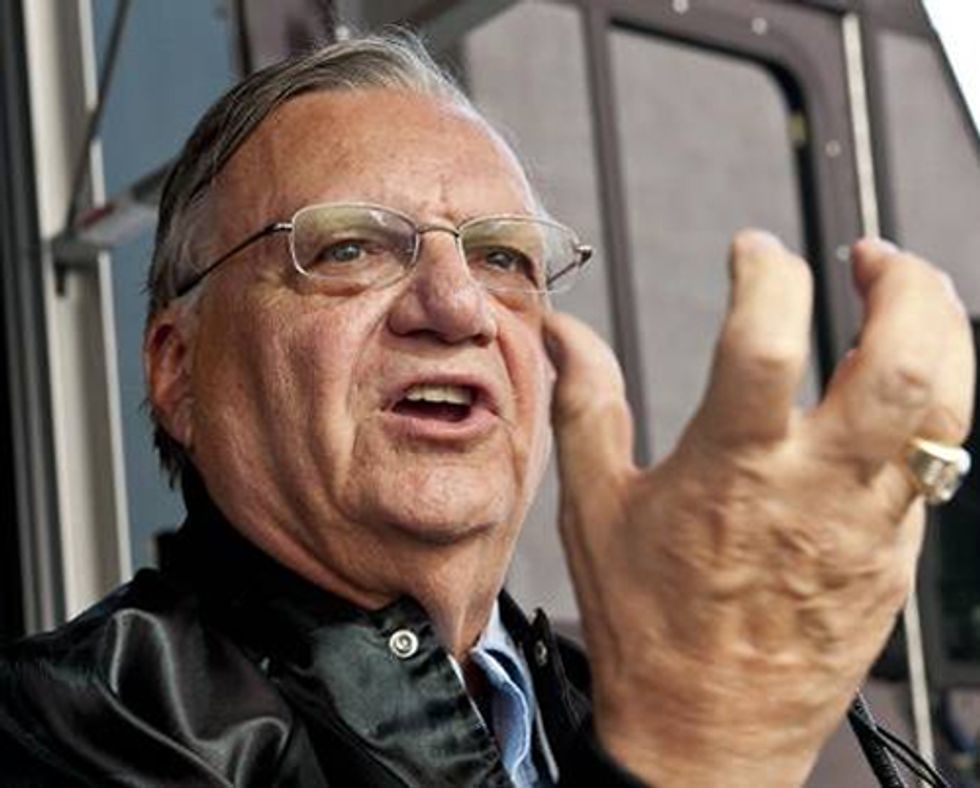 Back in 1993, Joe Arpaio -- the Arizona sheriff most likely to keep a lamp made of human skin in his sunroom -- established a "Tent City" in which to house prisoners in Maricopa County Jail. Since then, this "Tent City," which he gleefully calls a concentration camp, has been the subject of a lot of criticism from people who are not sadistic psychopaths. One of the major criticisms has been the fact that -- due to the extreme heat in Arizona -- temperatures in these tents can rise to 140 degrees in the summer. That is too many degrees!

Last week, Arpaio had a chat with conservative radio host Howie Carr, for the white nationalist anti-immigration group Federation for American Immigration Reform’s annual “Hold Their Feet to the Fire” radio event, to have a good LOL about prisoners suffering in the heat and the silly bleeding heart human rights activists who think that's a fucked up thing to do.

“You know, the usual suspects and the lawyers are coming into court and saying that the inmates are suffering terribly in your jails with the extreme weather in Arizona, you know,” Carr told Arpaio. “Yeah, that always brings a smile to my face when I read these stories.”

HAHAHAHAHA oh man, human rights abuses sure are hilarious! It's so funny how anyone would think that someone who committed a crime should have any right to not die of heat stroke! It's so delightful to think of people who committed crimes suffering, physically. And such a normal and not at all psychotic thing to do, to giggle about people being tortured.

Arpaio then explained that he had totally been to the Tent Cities, and is pretty sure these people shouldn't be complaining, because people in the US military also live in tents where it is very hot.

“I know, I was just in the tents two days ago, it was 136 degrees and I drank the Gatorade that I gave all the inmates, so you know what my answer is? Our men and women are fighting for our country, uh, live in tents, so shut your mouth,” Arpaio said, explaining that people who are convicted of crimes should not expect to live in better conditions than our US military. Except the main difference there is that people in our US military volunteer to join it, are usually aware of what they are getting into, and are required to be in good physical condition.

I mean, hey, you might as well justify torture by pointing to an ad on Craigslist in which some dude offers to pay someone to waterboard him or something. If someone does it voluntarily, how can it be bad?

Arpaio then expounded on his new "solution" to this problem. Which will be to jazz up the uniforms of inmates by adding American flags to their uniforms. Ostensibly so that they can just pretend that they are members of the military?

“I’ll give you a scoop: I’m going to put American flags — I was going to do it on my birthday but I didn’t want to get involved because of what happened in Florida — but on Fourth of July, every inmate is going to wear an American flag on their uniform.”

Carr then suggested that, in order to avoid being accused of "microaggressions," Arpaio also allow inmates to wear Mexican flags or Guatemalan flags on their uniforms. Arpaio then joked "Or Italian flags." HA! Get it, it's funny because Joseph Arpaio -- who hates immigrants -- was born to Southern Italian immigrants during WWII, and clearly has some issues with that. Which he probably ought to resolve in therapy rather than through his work as a government employee.

As you may recall, Arpaio has attempted to address prison issues with fashion before, by requiring inmates to wear pink underwear. You know, because pink is a color associated with women, and is therefore humiliating. One time, a mentally ill inmate died because guards tried to force him to change into the underwear and he thought he was being raped.

After noting again that it was 136 degrees in the tents where the inmates were staying, Carr then joked, “Oh, my heart’s breaking. I wish we could cue some violin music here, it’s so terrible. This is cruel and unusual punishment, a violation of their Eighth Amendment rights, you know, come on, Sheriff.”

HAHAHAHA now that is funny because it's literally true! It is a violation of their Eighth Amendment rights! It is literally that. Because while we do sentence people to prison, we do not sentence them to anything like that. That is not part of the prison sentence. People can, and do, die in temperatures like that, from heat stroke. We do not sentence people to death for robbing a convenience store. Crazy, I know, but it's true!

Here's the whole segment, if you can stomach it:

Later in the segment, Arpaio reiterated his support for Donald Trump, because sadistic monsters gotta stick together, amirite?