Joe Manchin Calls For War On Drugs, Might Need To Talk To His Fentanyl-Pushing Daughter 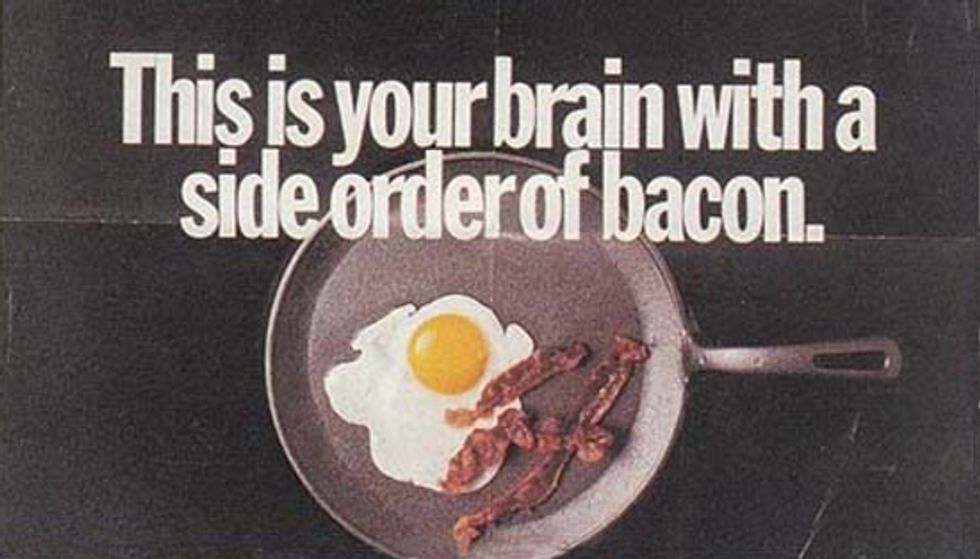 You want hash brownies with that?

"Democratic leadership member" Joe Manchin has a great idea for how to fight opioid addiction: How about a "War on Drugs"? Has anyone ever thought of that? We bet this fresh new thinking will probably do wonders to cut the death rate from opioid abuse, rather than, say, offering treatment to addicts, which just coddles them. Doctors agree: Putting people in jail is the best way to deal with a medical crisis. In an interview with CNN's Jake Tapper, who cited CDC statistics showing West Virginia has the nation's highest rate of overdose deaths, Manchin reached back to rhetoric from the Nixon administration, which is suddenly fashionable all over the place these days, what with silent majorities and the Law and Order president:

Now, to be fair, part of Manchin's suggested war actually does sound like he's talking about treatment, at least for half a moment, praising the work done by "some places that are really having some success rates, Jake, and most of them are run by reformed addicts," before shifting into the good old myth that most addicts use marijuana as a gateway drug to "be a cool kid" before they start raiding their parents' medicine cabinets for prescription painkillers. That may be the case for some users of opioids, but the CDC report notes prescriptions for opioids have quadrupled since 1999, and that "Opioid prescribing continues to fuel the epidemic." And wouldn't you know it, West Virginia has one of the highest rates of opioid prescriptions in the nation.

And if you're going to pursue a "war on drugs," you'll need to take this CDC finding into account:

Most people who abuse prescription opioids get them for free from a friend or relative. However, those who are at highest risk of overdose (using prescription opioids nonmedically 200 or more days a year) get them in ways that are different from those who use them less frequently. These people get opioids using their own prescriptions (27 percent), from friends or relatives for free (26 percent), buying from friends or relatives (23 percent), or buying from a drug dealer (15 percent). Those at highest risk of overdose are about four times more likely than the average user to buy the drugs from a dealer or other stranger.

So going after drug dealers may well cut the death rate, since that's where the highest-risk users tend to get their pills. But it would also not do much of anything to address a huge part of the addicted population, and doesn't address one of the most dangerous real gateways: over-prescription of painkillers.

[wonkbar][/wonkbar]If Sen. Manchin wants to cut the opioid epidemic, he may want to have a word with his daughter, Heather Bresch, the CEO of Mylan, which produces Fentanyl and other opioids. (Say, isn't that the same pharmaceutical exec who jacked up the price of your kid's epi-pen? Hell yeah it is! She's everywhere these days!) The Charleston Gazette-Mail ran an article this weekend explaining that even as West Virginia's opioid addiction problems exploded, pharmaceutical companies shipped huge amounts of opioid medications into the state, where small-town pharmacies are receiving far more pills than local populations can possibly need -- 9 million doses of hyrdrocodone in two years to a single pharmacy in the town of Kermit -- population 392. Kermit is in Mingo County, which has "the fourth-highest prescription opioid death rate of any county in the United States." These are legal drug wholesalers, not guys named D-Money, Smoothie, or Shifty. How great is the "legitimate" prescription pill oversupply in the state? "433 pain pills for every man, woman and child in West Virginia." So if it's war time, maybe we need to make sure we're going after the right targets.

And how about treatment opportunities? Nationally, fewer than half of opioid addicts are getting treatment, and even that sounds optimistic to us. A September report from the Pew Charitable Trusts shows that the need is far greater than the availability. West Virginia did at least accept Medicaid expansion under the Affordable Care act, which is helping a larger number of addicts, at least until Obamacare gets killed off. But West Virginia, with its Bible-belt culture, is far more likely to embrace faith-based programs rather than opioid-replacement drug treatments like methadone, buprenorphine or Vivitrol, which have shown to be more effective. One methadone clinic, in Huntington, said it could "serve up to 250 more patients if it hired more counselors," but is facing backlash from neighbors who don't want a bunch of addicts showing up. Maybe if they just prayed more.

[wonkbar][/wonkbar]So hooray for the new War on Drugs -- it's about as likely to work as the old war, but since Donald Trump is such a good pal of Philippines President Rodrigo Duterte, maybe the Trumpers will decide to give up on treatment altogether and just start shooting addicts, curing them once and for all.