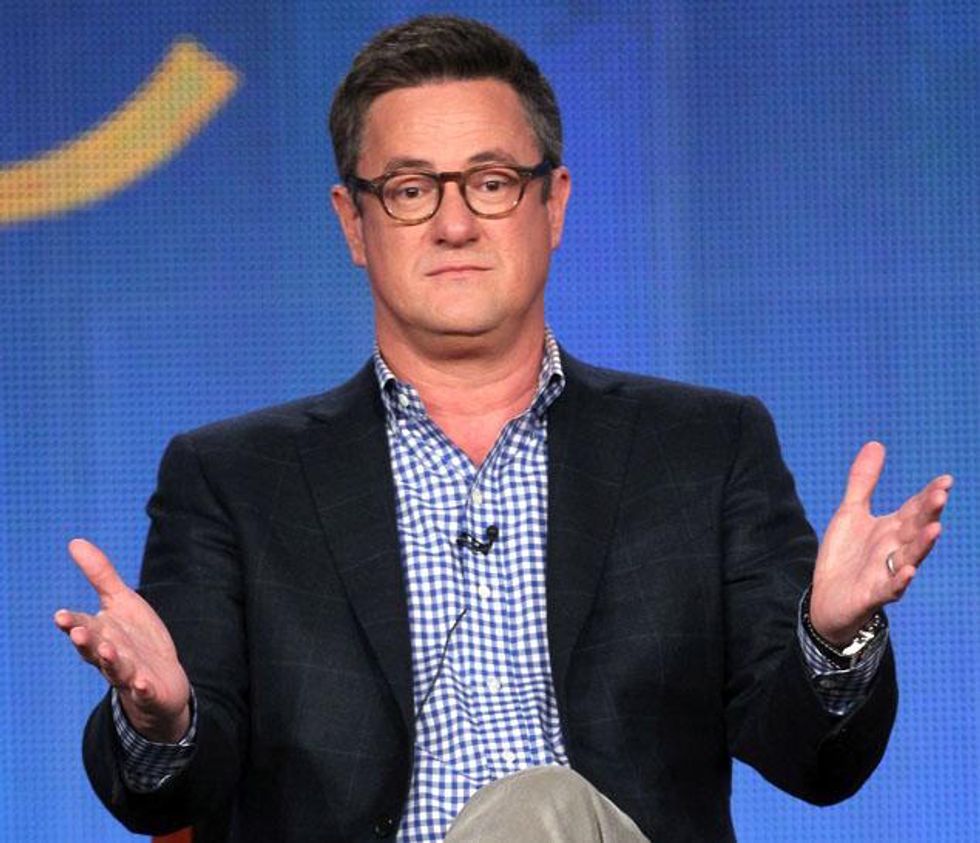 You were expecting better?

On Tuesday night, Hillary Clinton gave a speech. And it was a great speech. Unless you are a white dude in The Media, in which case it was not a great speech because Hillary Clinton was giving it. And what with her being a woman, and speeching in her woman voice, and making expressions with her woman face, you can see how that's a real problem for white dudes in The Media. [contextly_sidebar id="rJiFV3mM5S1avHbb7PsQxzZRyxaucQrl"]She was too angry, too shouty, too not-smiley, too not-a-man for the delicate sensibilities of MSNBC's Joe "I dunno how that dead intern got into my office" Scarborough and Fox News's Howie "I was fired for being wrong all the time" Kurtz and other dudes with their sensitive dude feelings, tweeting from their fainting couches because a presidential candidate gave a fiery victory speech -- which, point of fact, was plenty goddamned full of smiles -- without even having a penis.

Thank goodness card-carrying chauvinist Joe Scarborough was recently gifted with yet another platform to smear his verbal smegma across our faces. So, like a typical man who's far too emotional and needs to talk about his feelings, he used his Washington Post column to explain why he was totally right to tell Hillary Clinton to smile more than she was already smiling, which was plenty:

Last night while watching election returns, I live-tweeted my reaction to the results. After first tweeting about Hillary Clinton’s remarkable night, I noticed that the conquering hero was looking a bit dour for a candidate who was reveling in a clean sweep that all but locked up the Democratic nomination. I then tweeted that Clinton should smile because she was having such a great night.

It seems that my brief tweet succinctly summed up 10,000 years of sexism in 30 symbols because I dared to suggest that a political candidate act joyful while delivering a celebratory speech to the American people.

Fact: That IS a smile

Yes, doesn't she look so dour here? Clearly, she was in desperate need of some good old-fashioned mansplaining that she was WELL ACTUALLY having a good night; lord knows she couldn't have sussed that one out on her own, what with her teeny tiny little itty bitty girlbrain. As she she stood on the stage, thanking the states who gave her sweeping victories and calling Donald Trump out for being a divisive racist hatemonger, the one thing she needed most was some Pro Tipping from Joe Scarborough about how she was victory speeching all wrong, like a girl.

[contextly_sidebar id="tPIpeS038Uc6AgcKBo62dnlkYOL6U3NA"]Scarborough gives himself his own reach-around for his supposedly "my long history of praising Clinton as the toughest player on the political scene," which is some man-sized bullshit right there. We don't recall Scarborough "praising" Clinton, unless being an unspeakable dick is supposed to be a compliment. Like that time he girl-talked with Rand Paul about how it was kind of Hillary's fault her husband got a beej that one time and also, as Joe observed, it means she's not allowed to call Republicans (like Joe Scarborough?) warring-on-women sexist pig-fuckers:

If Hillary Clinton attacks the Republican Party’s handling of women and treatment of women and disrespect for women and suggests they’re misogynists etc., etc., etc., it does seem to be a fair question to ask right now a few years out, does the media have a responsibility to say, "Well, let’s see what happened when you were in the White House and how women were treated when you were in the governor’s mansion and the White House?" Is that fair?

Does this not compromise Hillary Clinton’s ability to bash Republicans as being terrible towards women, misogynists, etc., etc.?

Not a big enough smile?

No doubt those words two years ago were simply intended as some friendly campaign advice for Clinton too, right? Maybe after poor sensitive Joe's inbox was filled with people raging at him -- when, by the way, she was smiling plenty, you dim-witted jagoff morning show monkey -- he realized the indisputable factual error of his unsolicited advice to the smiling, glowing, happy candidate that she should be doing it more and harder, for his personal satisfaction, and he's sorry 'bout that. Ha, no of course he isn't and fuck you, he writes in his column:

If you are thinking at this point in my post that I am working my way toward a mea culpa, you couldn’t be more wrong. I’ll quote Pete Townshend on the topic of my tweet and declare that “I’ve no need to be forgiven.”

Well in that case, fuck you right back, Joe.

Then Joe tenderly caresses his own nutsack for being the only one in the whole wide world who so bravely and brilliantly "predict[ed] both the rise of Donald Trump and the coming collapse of Marco Rubio." Because he was so effective at declaring Marco Rubio a failed candidate, if there's anyone who deserves Joe's heartfelt sorry, it's poor Marco:

If I owe anyone an apology this campaign cycle, it’s probably Rubio for being as tough as I was in calling out the media and the Republican establishment for being so wrong about what I always considered to be a vacuous campaign.

But to those suggesting that critiquing a woman in the same way that one would critique a man is unfair, I can only say that there are no microaggressions when you are running for the highest office in the land. [...]

No man should say “smile” to a woman walking down the street. I understand that and would never say such a thing. But Clinton is not a pedestrian on her way to work. She is the most experienced politician on the national stage today who wants to be the next president of the United States. Critiquing anyone’s political skills who seeks that office is always fair game.

How enlightened of him. He understands that it's wrong, maybe even sexist, to tell a woman to smile. But Hillary Clinton isn't a woman; she's a presidential candidate. So it's A-OK to be as sexist as you want to her. She's asking for it, after all.