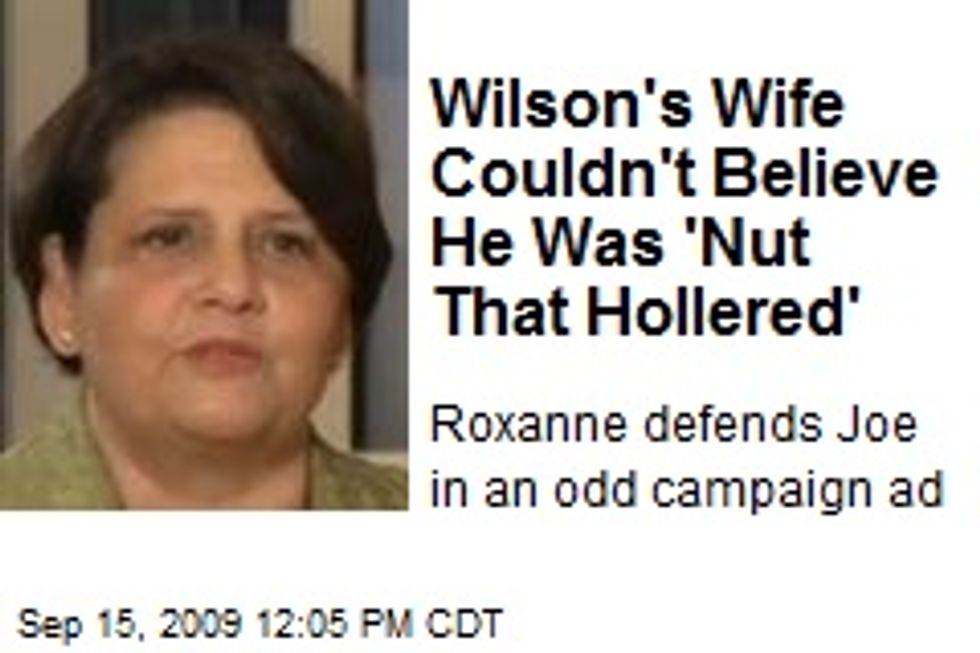 The weather outlook for South Carolina politics is "veritable shitstorm" for the next month or so owing to the hilarious-tragic inability of either major party to follow state election commission filing rules for candidates, which led the South Carolina Supreme Court last week to issue a monstrous "F" in reading comprehension to 180 candidates who failed to submit hard copies of ethics disclosure forms on time and now cannot appear on the June primary ballot. Legislators from the state Senate Judiciary Committee and party leaders are currently working on different ways to address the situation, but Joe 'You Lie' Wilson's wife, Roxanne, has also helpfully stepped in to make the usual Wilson family contribution to any weighty political moment: SCREAMS. UPDATE NOW WITH VIDEO BELOW!

The wife of U.S. Rep. Joe Wilson rushed up to Sen. Jake Knotts when the [Senate Judiciary Committee] meeting ended Tuesday, criticizing him. Pointing her finger, she said he was wrong to object to a measure extending when candidates could file paperwork.

Knotts responded that she was wrong to act that way in public as a congressman's wife. When security attempted to calm her down, she pushed the guard out of the way and rushed into Knotts' office.

When they emerged, she kissed Knotts on the cheek, saying they'd made peace.

**UPDATE** Wonkette commenter "actor212" is also screaming, at your editor, for neglecting to include this hottt video of the screamy fight. Get out yer popcorn and whippits!