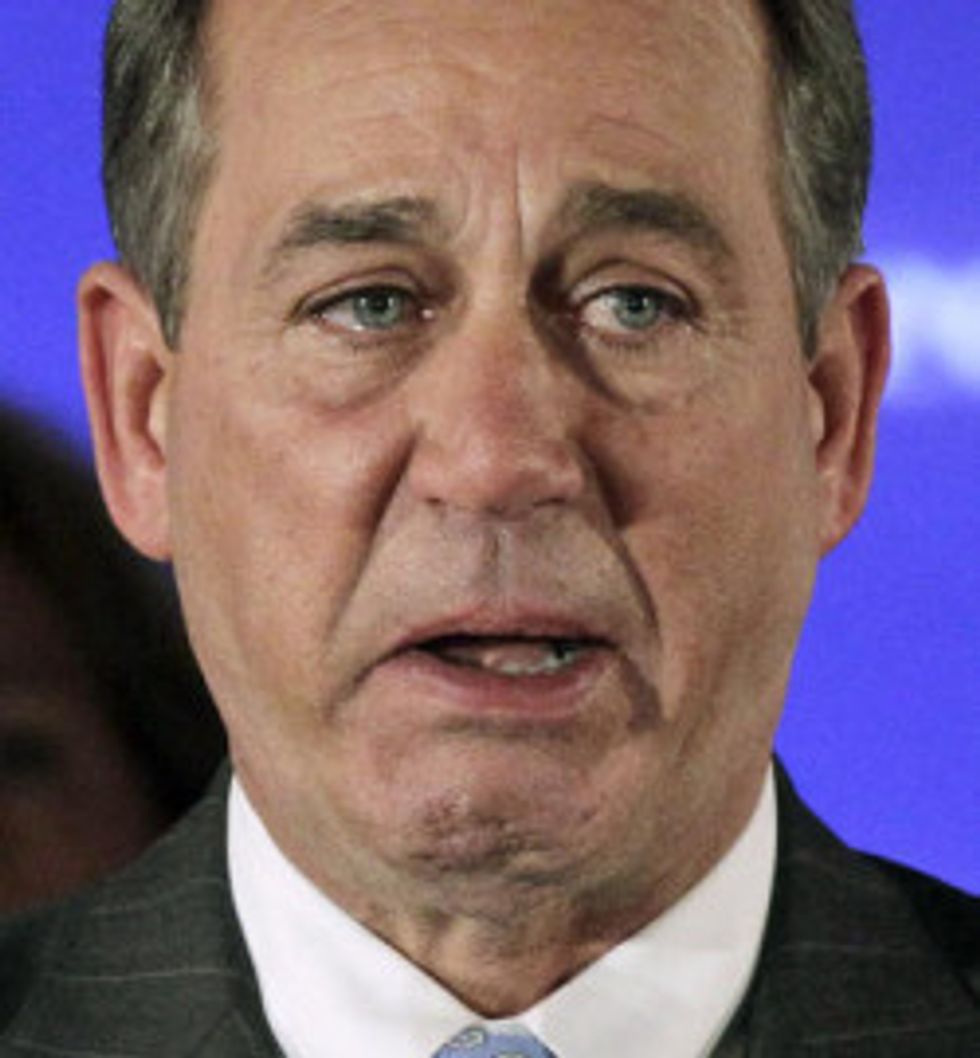 We’re a little worried about John Boehner. He looks in that video like he had the shakes. Probably his aides had to have a flask of bourbon ready the second he left the podium.

Boehner was slurring his way through a press conference about the current Department of Homeland Security funding fight, during which he suggested the press ask the Senate Democrats “when they’re going to get off their ass and do something, other than to vote ‘No.’” (Listen carefully and you can hear the assembled reporters cracking up at that one.)

If you are a fan of Capitol Hill funding fights, schadenfreude, and popcorn, then the current squabble over funding DHS before it runs out of money in two weeks is right up your alley. It’s got everything that warms our cold liberal heart. The House Republicans are mad at the Senate, the Senate Republicans are mad at the Democrats and the House and each other, and the Democrats are laughing so hard they can barely choke down their coq au vin in the congressional cafeteria. Let’s gigglesplore!

The situation springs out of the wingnuts’ desire to roll back Obama administration policy on immigration, including not just the reforms the president announced in November but also actions he announced in 2011 and 2012. As with the bills to repeal Obamacare and build the Keystone pipeline they have passed since January, the Nutbar Caucus seems to think that just passing a bill and screeching will be enough to bend Obama to their will.

In this case, House Republicans came up with the genius plan to tie funding of DHS through September to the immigration rollback. Surely the Democrats in the Senate would not filibuster the bill, forcing DHS to shut down and giving the GOP an opportunity to call them weak-kneed Bolsheviks who would leave the homeland open to terrorist attacks. To which the Democrats reminded them that it’s not an election year, laughed, and filibustered the DHS funding bill. Three times.

The Dems seem to have reasoned, correctly, that the infighting among the GOP over how to get a funding bill through the Senate would overshadow any blowback on their own party, and would be hilarious to boot. And they were right.

First, Mitch McConnell explained to the House GOP that there are not enough Senate Democrats willing to break ranks and give the Republicans the votes to break the filibuster. (This is what, the zillionth time this has had to be explained to the Nutbar Caucus in the last six years?) The solution is easy: pass a clean funding bill, one with all the immigration reform rollbacks stripped out, and let’s move on.

The House, being racist against McConnell because of his Turtle-American heritage, has retorted “Screw you, Kentucky Bourbon. Wave your magic Senate wand, call in your unicorn army, and pass our bill, after which the Kenyan Usurper will be so cowed by our unstoppable momentum that he will sign into law a rollback of every immigration action he has taken during his presidency. This can totally work!”

The House is aided in its efforts by Sen. Ted Cruz, who blamed the impasse on Republican leaders who did not listen to him late last year and get even more confrontational with Obama by refusing to fund the entire government and killing all his nominations until he bowed to the GOP on everything. Because the shutdown strategy worked out so well for Republicans last time Cruz pushed them into it.

The Democrats, meanwhile, are all, “Ha ha, governing is tough when the opposition says no to everything, isn’t it?” Or they would be saying that, if anyone could understand them through their chortling.

The pressure is starting to get to the GOP. On Tuesday, Illinois Senator Mark Kirk, normally a moderate, suggested that if a funding bill isn’t passed, “The Republicans – if there is a successful attack during a DHS shutdown – we should build a number of coffins outside each Democratic office and say, ‘You are responsible for these dead Americans.’” Which won Senator Kirk the Grandstanding Award of the Week, which is no small feat on Capitol Hill.

Funding for DHS runs out on Feb. 27, unless the GOP can come up with a compromise…HAHAHAHAHA, oh we have fun.