John Kasich Opposes D.C. Statehood Because, Ew, There Are Democrats There 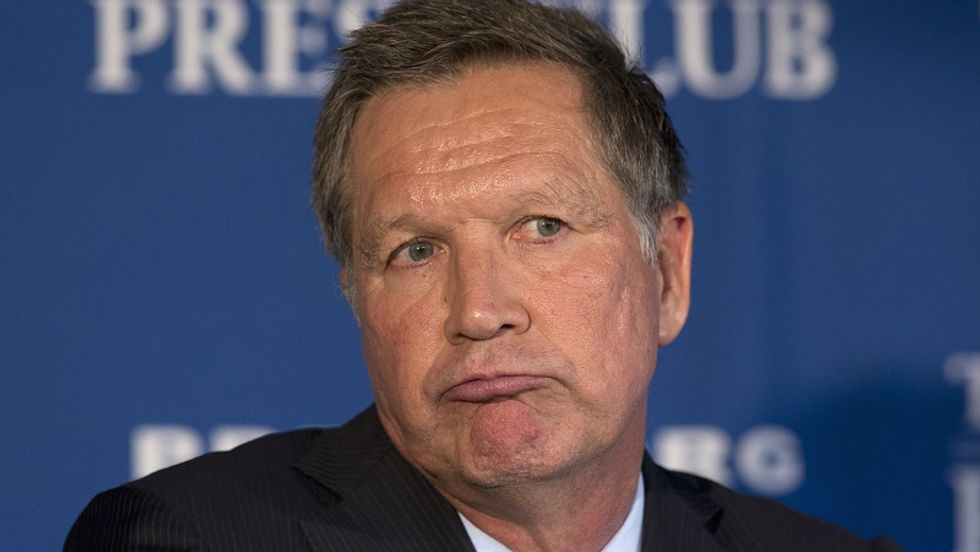 For a country that was partly founded on the idea of opposing "taxation without representation," it's always been a tad odd that those who live in our very capital, the District of Columbia, pay taxes while being denied representation. Especially when you consider that there are more people living in D.C. than in either Vermont or Wyoming. On the bright side, they do get to have the snarkiest license plates in the nation:

Given that the vast majority of DC residents would like to pursue statehood, that it seems pretty unlikely that most people who are not fanatically opposed to a flag redesign would really care either way, it seems a bit weird for anyone to not want them to be a state. This is America! We are supposed to want all the people to vote, right? Like, that's the whole thing about a democracy!

Unless you're John Kasich. In an interview with the Washington Post, Kasich basically came right out and said that he opposed the idea of D.C. statehood specifically because there are too many Democrats in the District.

ARMARO: You voted against statehood for D.C. when you were in Congress.

ARMAO: Is that still your position, and do you have–

KASICH: Yes, I would it say probably is.

ARMAO: What about voting rights in Congress, voting representatives?

ARMAO: But you realize though that people in D.C. pay taxes, go to war and they have no vote in Congress.

ARMAO: How is that–

KASICH: Well look, I am not – I don’t – I am not, because you know what, what it really gets down to if you want to be honest is because they know that’s just more votes in the Democratic Party. That’s what–

ARMAO:  So if there were Republicans in the District, you would have a different position?

KASICH:  Yeah, okay, well look, they send me a bill, I’m president of the United States, I’ll read your editorials.

It's not "just more votes in the Democratic Party," John Kasich. It's more votes, period. Votes that should count regardless of who they are for! And though this may come as a surprise to you and your friends in the GOP, it's actually not super cool to disenfranchise people specifically because they're not going to vote for your party.

It is, however, lovely of him to say that he would consider looking at a bill to make D.C. a state if he becomes President of These United States, which is definitely a thing that has a chance of happening.

While it may seem odd that this would be something a person running for office would actually admit to, out loud, in an interview in a widely read newspaper, when discussing things like early voting and voter ID laws, it is not entirely unusual for them to admit they are opposed to making it easier for poor people and people of color to vote because "those people" are unlikely to vote Republican. They often say something about "those people" (they mean black people) being in thrall to the Democratic "plantation." (That would be the "plantation" that moved from forcing slaves to build the White House to putting a black guy in it, over Republicans' unending but super not racist objections.)

Anyway, John Kasich's not racist; he just prefers having two senators for Dick Cheney's half-million best friends in Wyoming and none for the 700 thousand people in DC, half of whom only happen to be black.

Oh, right, he probably is racist after all.