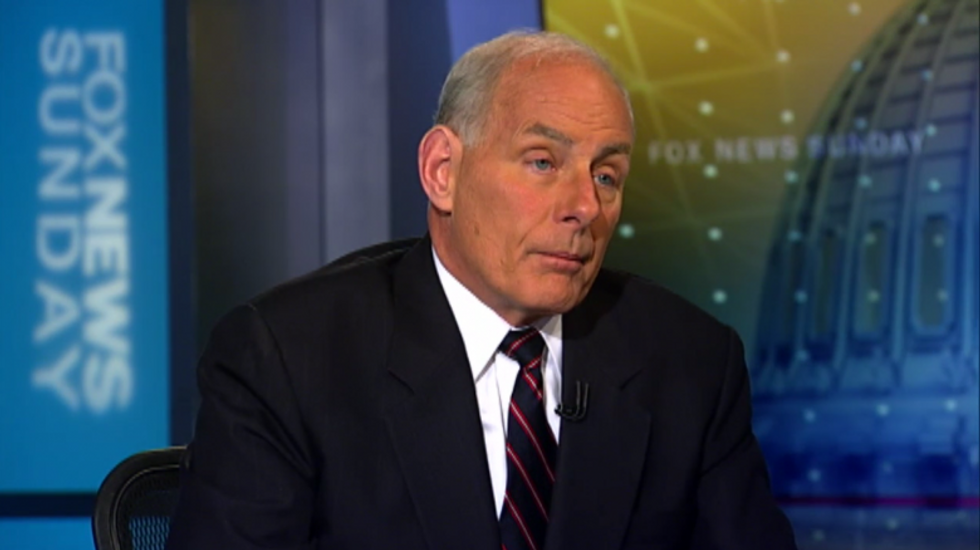 And now, John Kelly, whose job has been on the rocks forfuckingever at this point, reportedly calls Trump an "idiot" when Trump isn't in the room, according to a scoop from probably the Jared 'n' Ivanka wing of the White House (or literally any other faction that's currently mad at Kelly) and laundered through NBC News:

[Eight current and former White House] officials said Kelly portrays himself to Trump administration aides as the lone bulwark against catastrophe, curbing the erratic urges of a president who has a questionable grasp on policy issues and the functions of government. He has referred to Trump as "an idiot" multiple times to underscore his point, according to four officials who say they've witnessed the comments.

Kelly says this report is Fake News, to which we reply WHAT, YOU GONNA BLAME A BLACK LADY IN CONGRESS FOR IT?

Anyway, it's just true that Trump is an idiot, but we don't actually have a lot of confidence in Kelly as the "lone bulwark against catastrophe." Also, maybe if Kelly isn't happy working for an "idiot," he should've said no to the chief of staff job in the first place, instead of going to work for a guy he thought was "dishonorable," according to James Comey's telling of the story.

NBC says a few folks say Kelly wouldn't have called Trump an idiot, because they don't think he would use that word. Maybe he's more of a "moron" guy, or likes to think of Trump as a "shithole person." We just can't be certain! Regardless, we think Kelly's been talkin' some naughty turkey about President Words Is Hard:

"He says stuff you can't believe," said one senior White House official. "He'll say it and you think, 'That is not what you should be saying.'"

For instance, NBC News says Kelly has specifically used the word "idiot" to describe Trump's understanding of DACA, which apparently ends with his knowledge that #ObamaDidIt.

Now, don't think "John Kelly is correct about a thing, so he must be a better guy than we thought." Because for one thing, in that very section about DACA, it explains (and again, we already knew this, but it's important) that John Kelly "saved" Trump "from himself" when he wouldn't let him sign a bipartisan DACA deal. So now all the DREAMer kids are getting throwed in jail because John Kelly is a fucking neanderthal who beats his chest and screams at brown people. (He is very racist about immigrants.)

Also, there is more news about how Kelly is a GIANT shitheel, to add to our John Kelly Is A Giant Shitheel pile, we mean besides the DACA stuff. For instance, he has reportedly said women are just naturally more "emotional" than men, and also, he really wanted all the wives wife-beater Rob Porter had beaten to GET OVER IT, LADIES:

... [D]uring a firestorm in February over accusations of domestic abuse against then-White House staff secretary Rob Porter, Kelly wondered aloud how much more Porter would have to endure before his honor could be restored, according to three officials who were present for the comments. He also questioned why Porter's ex-wives wouldn't just move on based on the information he said he had about his marriages, the officials said.

But yet again, we have "conflicting" (not conflicting) information from different White House officials who say actually Kelly is gentleman savior of all the ladies, who tells everybody to stop saying potty talk when ladies are present, because Kelly may not be too worried about wife-beaters, but he's good and damn well gonna protect a little lady from hearing some uncouth scallywag say "motherfucker!" or "poop crackers!"

If anything, they said during meetings Kelly is the "bigger gentleman" who steps in when aides use foul language to note "a lady is present" and similarly says he shouldn't use foul language in front of a lady if he's used an expletive.

Remember that time Kelly said he longs for the good old days when women were "sacred"? He said it when he was lying about black congresswoman Frederica Wilson! He wasn't treating her very "sacred," was he?

Anyway, point is that John Kelly is a very nice man. Just don't get beaten up by Rob Porter on Kelly's watch and everything will be fine.

This is a post about Trump being an idiot (which is basically 64% of Wonkette's posts at this point) but NBC News does include one scoop that, while it won't make you LIKE Kelly, it will scare the absolute fuck out of you about what happens once Trump fires Kelly on Twitter, for calling him a big "idiot":

In one heated exchange between the two men before February's Winter Olympics in South Korea, Kelly strongly — and successfully — dissuaded Trump from ordering the withdrawal of all U.S. troops from the Korean peninsula, according to two officials.

For Kelly, the exchange underscored the reasoning behind one of his common refrains, which multiple officials described as some version of "I'm the one saving the country."

Another scoop in the piece to terrify the shit out of you is that Trump initially wanted to pick Kris Kobach as the new Homeland Security secretary, but instead Trump is pretty sure Kelly #RIGGED the process to force him to pick Kirstjen Nielsen. That's right, you just sit right there and imagine Homeland Security Secretary KRIS FUCKING KOBACH.

In short, John Kelly is an asshole, and after he is fired, we are all going to die.