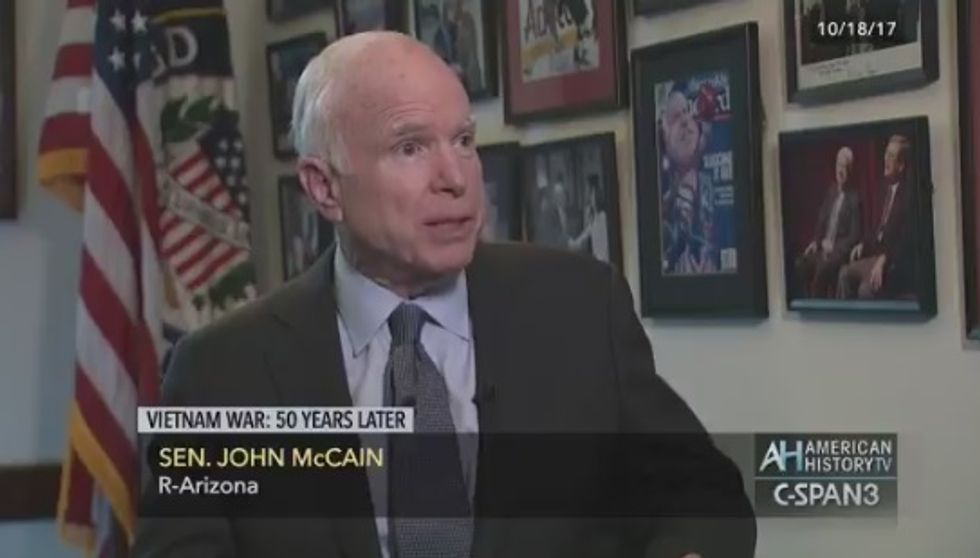 John McCain took the opportunity in a C-SPAN interview aired Sunday night to remind America that not everyone spent FIVE AND A HALF YEARS, ALAN, as a POW in North Vietnam. Some people, McCain said, had a fine time during the late '60s getting shitty grades at Wharton and pretending they were so laid up by bone spurs that miraculously healed up all on their own. No names or anything. But we have a pretty good idea who McCain had in mind.

The beauty of the thing is how McCain prepared the ground for the dig at Trump, framing it as part of the overall chaos and mismanagement of the Vietnam War, which was the real topic of the interview. Watch that video up there for a master class in passive aggression, kids. McCain starts at the very top, with the duplicity of the Gulf of Tonkin resolution and LBJ's unwillingness to provoke China, then moves on to the chaos in America. As an aside, let's note that if "Donald Trump" weren't the punchline here, we'd be mocking McCain for his suggestion that somehow Johnson's cautious, supposedly indecisive conduct of the war didn't merely "strengthen the resolve" of North Vietnam, but somehow led to "the New Age, the use of drugs, demonstrations right out here on this Mall" and other divisions in American society -- as if somehow Johnson hadn't been brutal enough in trying to bomb everything in North Vietnam that hadn't been bombed yet, and that's what led young folks to go crazy with the drugs and the rock and roll "music."

But then, having set (however dubiously) the historical context, and getting on more solid ground by invoking other fallout from the war, the "mass arrests, demonstrations, Chicago" -- the '68 convention, not the current rightwing shibboleth -- McCain moves in for the rhetorical kill:

It was a tumultuous time, and most of it was bred by the conflict. And one aspect of the conflict, by the way, that I will never ever countenance is that we drafted the lowest-income level of America, and the highest-income level found a doctor that would say that they had a bone spur. That is wrong. That is wrong. If we are going to ask every American to serve, every American should serve.

Remember How Donald Trump Is A War Hero, Too, Except The Opposite Of That?

That is how you insult a "president" who told Howard Stern that avoiding herpes was his "personal Vietnam." Like Charlie, every minute herpes squatted in the bush, getting stronger, while Trump got weaker. And like a genital rash, John McCain also bides his time, waiting to strike.

As the Washington Post notes, McCain also manages at least a "whiff of plausible deniability." We all know he's talking about Trump, but just as if he'd criticized some other nameless chickenhawk who managed to get into the Air National Guard at a time when Guard units were not being deployed, McCain can plausibly say he's talking about the injustice of who went to war, and who got to stay home:

Plenty of wealthy Americans avoided being drafted into Vietnam, after all, and bone spurs (“a calcium deposit causing a bony protrusion on the underside of the heel bone”) are a somewhat common reason for such deferments.

We have plenty of reasons not to think too highly of John McCain. But now and again, he manages to impress us with the sort of artful bitchery one seldom sees these days. It's an elegant weapon for a more civilized age, and he used it with elan here. Bravo.

And if Errol Morris hasn't started making arrangements to do a documentary on John McCain, he'd better get busy. Morris would be exactly the guy to get McCain to talk about himself in all his contradictory, deeply flawed glory.

Wonkette is ad-free and supported by Readers Like You.