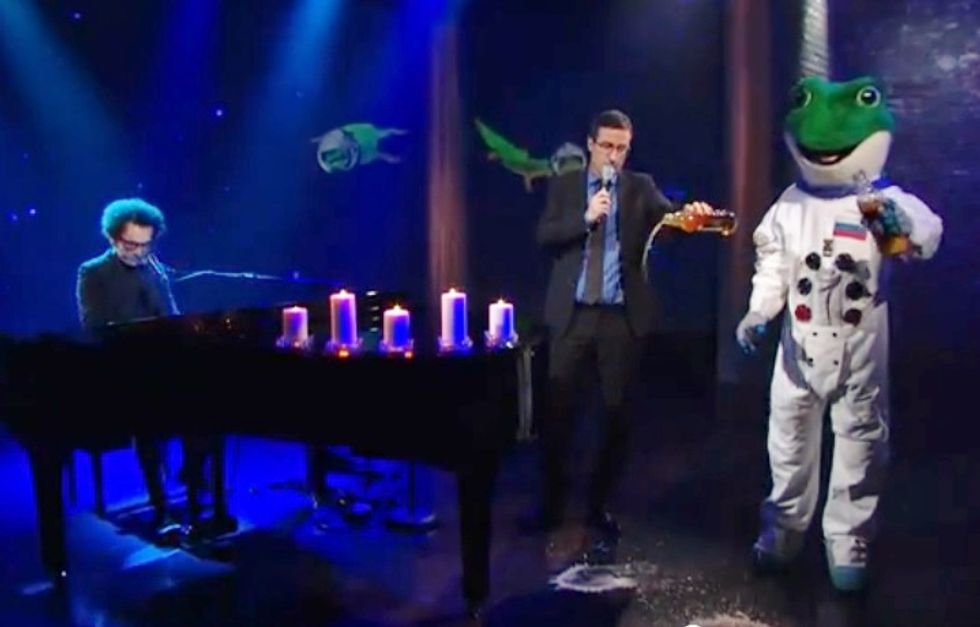 John Oliver'sLast Week Tonight is back from vacation, and brings us this cheery back-to-school report about the growing problem of student loan debt. There's more student debt in U.S. America than credit card or car loan debt, and it's second only to mortgage debt, which we seem to remember caused some sort of a little dust-up in the economy a short while back (but that was only because Barney Frank forced banks to loan money to bad poors). Oliver warns that "student debt is like HPV: If you go to college, you're almost certainly going to get it, and if you do, it will follow you for the rest of your life."

Incidentally, there's one especially big driver of all that debt -- for-profit colleges, which make an assload of money pitching their dubious degrees to students, who get government-backed loans that they have to pay back no matter what, while the schools spend more on advertising than on faculty salaries. It's a pretty good scheme if you're the school! And all the debt burden ends up on students who had hoped they'd become the next Steve Jobs, but didn't quite realize that they weren't actually going to end up getting a job in electronics ... if they were among the lucky 1/4 of students who graduate at all.

And then there's the Corinthian College nursing grad who never actually set foot in a hospital, but did at least get a visit to the Scientology museum for her psych rotation -- that would be the museum whose entrance displays the motto "Psychiatry: An Industry Of Death." For its part, Corinthian at least responded to an interview request by insisting that Last Week Tonight explain, for balance, that the women successfully sued the school, went to another institution, and are now real RNs, so hey, worked out in the end, right?

As usual, it's a brilliant mélange of scary journalism, thoughtful analysis, and comedy. And it also includes an excerpt from LBJ's classic phone call to the Hagar slacks company so he can get pants that accommodate his enormous balls. Trust us, it makes sense when you watch it.

For a chaser, Oliver brings us a touching tribute to the Russian Space Geckos, which are now confirmed to have been lost in the service of science. They were sent into orbit to mate, but the satellite lost contact with home base, and the hapless fuck-lizards are now dead. Thankfully, after "five mournful flicks of the tongue," there's a song by band A Great Big World, and a ceremonial pouring-out of a 40.