Jonah Goldberg Has Thoughts About Hobby Lobby, And All Of Them Are Wrong And Dumb 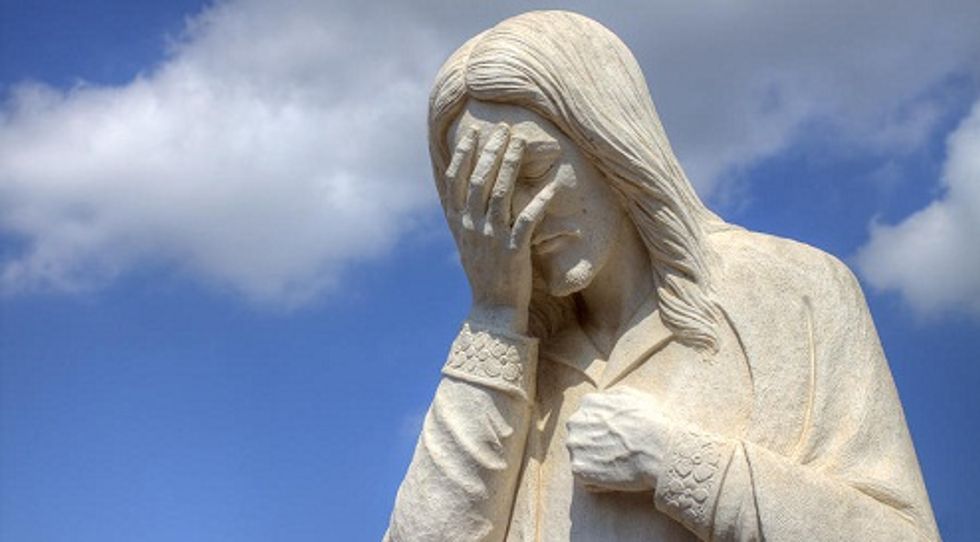 We usually ignore Jonah Goldberg because sweet merciful Yehuda, life is just too short. But his column today on the Hobby Lobby decision is such a precious pile of stupid, we could not let it pass without comment. Also, if we have to think about Jonah Goldberg’s penchant for cosplay as a Game of Thrones character, then so do you.

First, a rule of thumb for all you aspiring pundits out there: if a reader is so gobsmacked by the stupidity of a paragraph that he has to re-read it half a dozen times and then go into the secret Wonkette chatcave to talk about it with his fellow writers and make sure he is not insane, then there is a chance you have written something of such supreme idiocy that dead Greek philosophers would regret their part in the evolution of rational thought. Like so:

Hobby Lobby never objected to covering birth control per se. It already covers 16 kinds of birth control for its employees. But it objected to paying for what it considers to be abortifacients, which don’t prevent a pregnancy but terminate one. The pro-abortion-rights lobby can argue that “abortion” and “birth control” are synonymous terms, but that doesn’t make it true.

What the what? It is not the “pro-abortion-rights lobby” that is making this argument at all. No one disputes that abortion and birth control are different. What people dispute is that the types of birth control Hobby Lobby objects to are in fact abortifacients. You know who disputes this? MEDICAL SCIENCE. In fact, the American College of Obstetricians and Gynecologists submitted an amicus brief to the Supreme Court in support of the government’s position on this. Samuel Alito even admitted in his opinion that these contraceptive methods may not be abortifacients, but Hobby Lobby believes otherwise despite all scientific evidence, and that’s what is important.

In fact, Jonah’s second sentence of that paragraph says just that. Then he contradicts it in the next sentence. That’s some fine opining, Jonah.

Also, perhaps you could mention that there are a whole bunch of companies that object to paying for all forms of contraception., and that the Supreme Court on Tuesday issued a clarification stating that Monday’s ruling applies to those companies. So even though Hobby Lobby is still okay with including those 16 forms of contraception in its health plans, there are thousands of women who work for companies that are not.

Oh wait, you do address that, sort of.

The decision doesn’t apply to large, publicly held corporations, but even if it did, it is unlikely that many companies would go down that path. And even if they did, birth control would not be “banned” – employees simply would have to pay for it themselves.

No one thinks that birth control will be banned, though we have no doubt there are some revanchist assholes (cough Rick Santorum cough) who would be okay with that. The objection is whether or not your employer-provided health insurance, an earned benefit that some bosses offer in lieu of a higher salary, should cover medicine that your boss’s religion finds objectionable.

If I like to dress up as a character from Game of Thrones on weekends, pretending to fight snow zombies and treating my mutt like she’s a mystical direwolf, that’s none of my employer’s business. But if I ask my employer to pay for my trip to a Game of Thrones fan convention, I am asking him to make it his business.

Seriously, Jonah Goldberg just equated his Game of Thrones cosplay fantasies with whether or not an employer should get a say in an employee’s private medical decisions. How long do you think Jonah spent coming up with that analogy? Two seconds? Five? Was he composing this piece while shitting in a bucket in his garage when inspiration struck?

For liberals (and far too many Republicans), businesses should be de facto, if not de jure, extensions of government. If something is desirable, businesses should be forced to impose it. The fact that the owner disagrees or that it is not in the business’s economic interest is immaterial.

First, are you seriously arguing that the reproductive health and family-planning ability of female employees is not in a business’s economic interest? Because for all sorts of practical reasons, that is so lunk-headed we’re actually considering the possibility that you have the logic skills of a gibbon with a prion disease. And second … actually there is no second, because our head just exploded.

If anyone needs us, we’ll be yelling at Kaili for showing us this link in the first place.