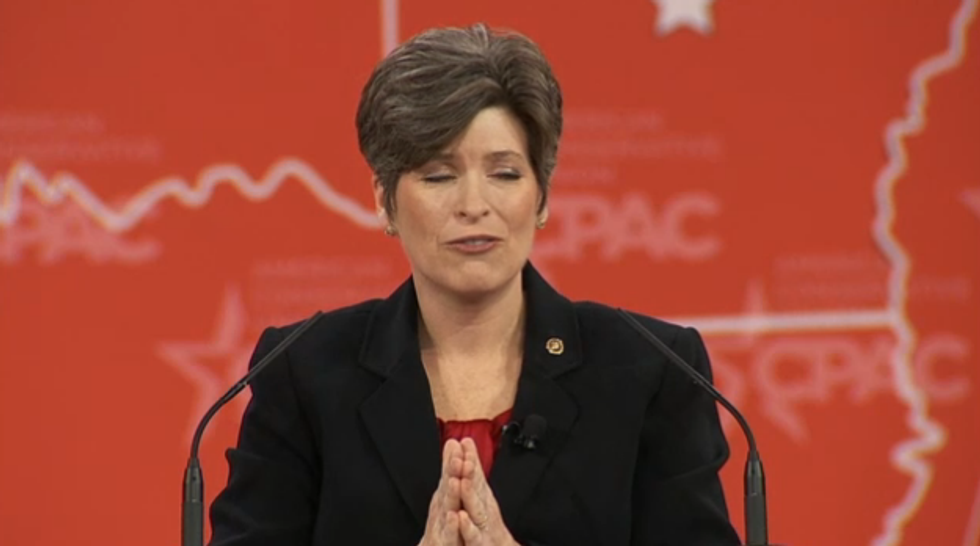 Awwwwwww yeah. It's the most wonderful time of the year, and no, we don't mean the War on Xmas. We're talking about the annual gathering of suited-up conservatives (seriously, ladies, leave your whore clothes at home) at the Conservative Political Action Conference. That's where our favorite wingnuts -- elected and never-gonna-be elected -- gather to read speeches off TelePrompters (oh yes they do) about how Obama sucks; conservatives are THE BEST; God hates liberals; freedom is great but not free, that's the magic of capitalism, duh; Obama sucks; guns hooray!; gays are icky and not allowed at CPAC because GROSS; Obama sucks; Constitution stuff; every life is sacred except for terrorists, bomb bomb bomb 'em all now; baby-killing whores and their whore pills, amirite?; Obama still sucks; FREEDOM!!!

Iowa's new senator and rising star Joni Ernst was there Thursday to verrrrry slowly and verrrrry carefully read a speech and not go off script or talk about how she wore bread bags on her feet as a little girl, like she did in her super awkward maybe-not-so-ready-for-prime-time-after-all Republican response to the president's State of the Union address in January. Bummer, we are SO SAD, bring back bread bags, NEVER FORGET BREAD BAGS.

Instead, the senator was there to talk about "celebrating the service and recognizing the sacrifices of America’s military veterans," which is nice of her, awwww. She also spoke about how she is workin' super hard in the Senate now, "on a wide range of issues including threats from ISIS, al Qaeda, and others who are being radicalized by them." Ernst failed to use the phrase "radical Islamic terrorist extremist terrorists," however, so FAIL, obviously she does not really know what she's talking about and doesn't even love America. She does, however, know exactly how to win all the wars:

Congress must hold President Obama accountable to ensure that he and his administration finally develop a cohesive and strong strategy to confront these and the many other threats that we face. We must also do all we can to stand up here at home to ensure that our veterans receive the quality of care they were promised and deserve.

Yep, that should do it for sure. ISIS is simply waiting for an official congressional condemnation of wimpy tyrant Obama so they can collectively surrender because they might be double-tough enough to behead people without batting an eye, but name-calling will bring them to their knees. That is how it works, and Ernst should know because she is a lieutenant colonel in the Iowa Army National Guard, which makes her A Expert on military stuff.

Also, she apparently heard Martin Luther King's "I Have a Dream" speech recently and sort of tried to paraphrase that, but like really badly?

OK, senator, sure, that's a nice sentiment, the original was much better, thanks for stopping by.

She was immediately followed by a lovely segment honoring all of our military heroes, led by none other than Greatest Patriot Ever Oliver North -- what, why are you laughing? -- who had lots of words to say about that time he fought in The Nam and how the “war against radical Islam” is this generation’s The Nam, so he knows the right lingo and clearly hearts America more than Joni Ernst.

Stay tuned, there is lots more crazy on the way.