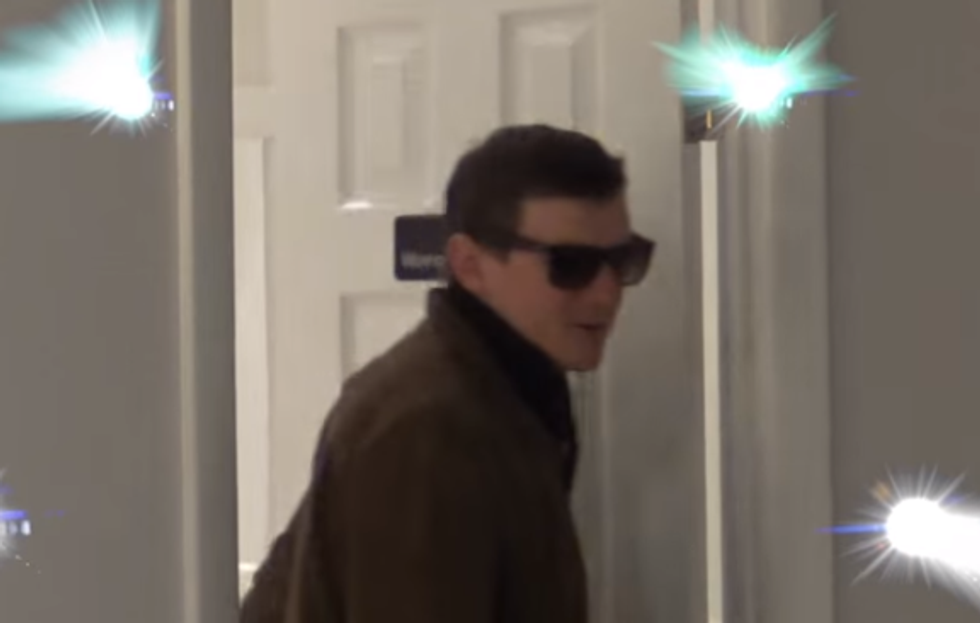 Not a real sex pervert you guys. ALLEGEDLY.

Uh oh, James O'Keefe, doer of wingnut "exposés" that don't expose much of anything, besides what a dishonest fucking creep James O'Keefe is, has done another thing. He has gotten RIGHT to the heart of the transgender agenda of being able to use the bathroom in North Carolina without catching a charge. Did you know that allowing trans people to use the appropriate bathroom is a very slippery slope to sex perverts diddling pooping townspeople against their will? IT'S TRUE! (It is not true.)

O'Keefe and some other chick went "undercover" as sexual predators, to see if the University of North Carolina would be OK with them doing gross sex things in the school's bathrooms. He talked to Jill Moffitt, Associate Vice Chancellor for Student Affairs and Title IX Administrator at UNC-Asheville, and this is what happened in the (we are sure) completely unedited video released by Project Veritas:

O'KEEFE: Hahaha suckers, CAUGHT YOU! Wait until the internet sees this!

WE ARE JUST FOOLING, that is not what's on the tape. At least it's not on whatever version of the tape O'Keefe released. Here is the real transcript:

O'KEEFE: We all use bathrooms for different reasons ... I'm not one of the transgender people. I do it for the women.

O'KEEFE: I mean there has been some Snapchats, but they self-destruct.

O'KEEFE: I hope they self-destruct ...

MOFFITT: You're taking Snapchats of women?

O'KEEFE: Well I don't want to explicitly say that because ...

MOFFITT: Okay, so let's do this. Don't tell me anything more. Because what you're doing is alerting me to what we call sexual exploitation.

Who's the secret Deep Throat source for this journalism story? TRICK QUESTION, nobody needs a Deep Throat when James O'Keefe is around!

Anyway, O'Keefe and his chick "journalist" friend talk to all kinds of different officials about how they are perverts who like to go in opposite-gender restrooms to get their jollies by Snapchatting man dicks and lady poop sounds. They both go to great pains to explain that they are NOT transgender, and that they understand that transgender people should use the bathroom that corresponds with their gender identities. But to be clear, James O'Keefe and his chick friend want these officials to know they're just rapey sex creeps.

We must encourage you FOR REAL to watch the video, because these officials' faces are priceless. Every last one is like, "Who are these leaking sex holes and why are they here?"

To be honest (AS USUAL WHEN O'KEEFE WASTES OUR FUCKING TIME) we have no idea what the point of this video is. O'Keefe seems to believe he's found some smoking gun that says North Carolina university officials turn a blind eye to actual sexual predators, and all for the sake of their precious Title IX moneys. But, um, not so much?

Maybe this is why O'Keefe is so unsuccessful as a "journalist." Even when he claims to find something, he's found ... nothing.

Wonkette does congratulate James O'Keefe, however, for finally typecasting himself in a role he can play convincingly.