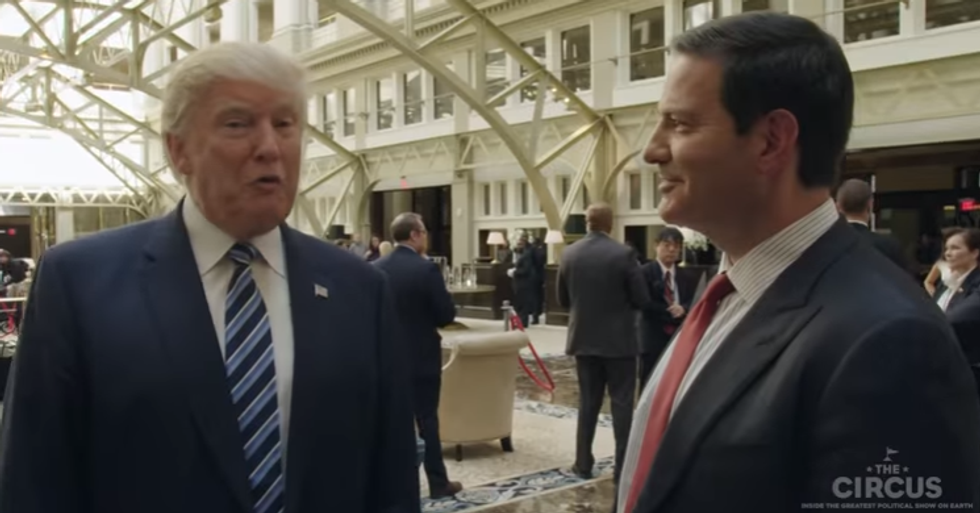 Somebody wants to be on Trump TV!

Out of all the hacky hacks in the Beltway media, one of the hackiest hacky hacks is Mark Halperin. He wrote that awful book, Game Change! And he's been doing some truly AMAZING shilling for Donald Trump over the course of the past year. Way back in March, Halperin said on the "Morning Joe" program that Trump is more talented as a presidential candidate than Barack Obama. He said it was impossible for Trump to be racist against that Mexican judge, because "Mexican is not a race." He thinks it was just super mean of the New York Times to release that hilarious lawyer letter in response to Trump's toothless threats to sue the paper for libel.

Now, everybody is laughing at a truly pathetic, kiss-ass, fan boy interview Halperin did with Trump on Wednesday, after Trump hopped off the campaign trail to go to the "grand opening" of his shitty hotel in Washington. Instead of giving you a transcript of Trump's words -- because fuck him -- we'd like to just give you some of the questions Halperin thought, in his hack journalist brain, would be good to ask Trump.

As to the answers, Trump's speeches are all good, but some are different from each other; Trump is going to win; Trump feels healthy and yoooge and wonderful; and no, Trump does not want to revise and extend his idiot comments on Obamacare, because they were already perfect.

Presumably, after he asked these questions, Halperin begged Trump to take a selfie with him and record the outgoing message on his home answering machine, because douchewads like Mark Halperin probably still have those. Then he fell asleep and had sweet, sweet dreams about how maybe one day he can work for Trump TV and get away from all the snobby liberal elite journalists at MSNBC and Bloomberg who make fun of him and say he's even stupider than Chuck Todd. Meanies!