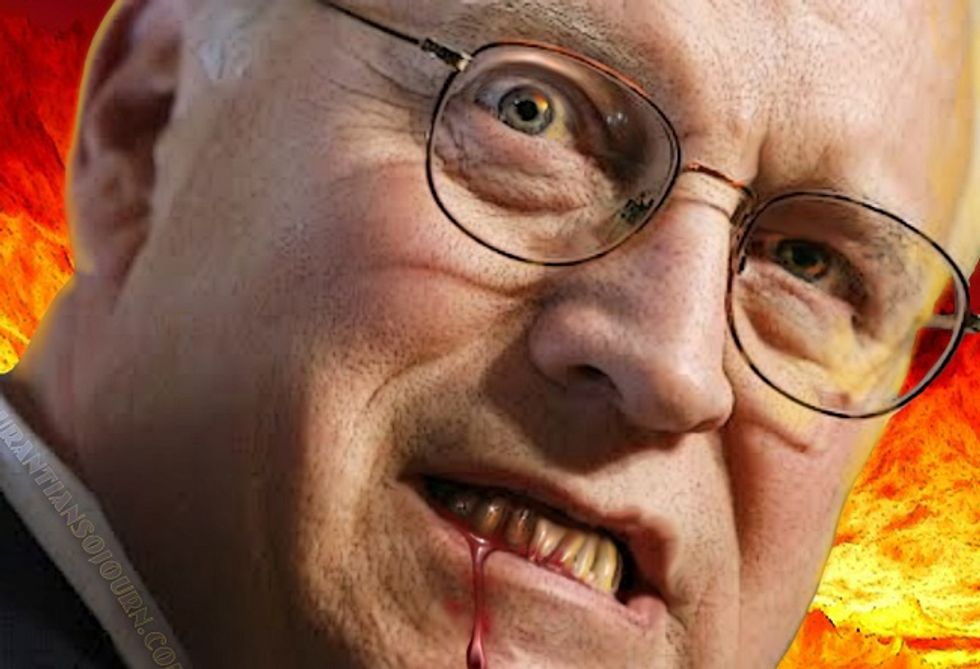 The weak light of my sputtering candle guided my descent down the stone steps. In the glow I could read the ancient runes carved in the walls, but of the ancient terrors inscribed there I must not speak.  At the bottom I emerged into a cavern, its dimensions unknowable in the darkness. There was a phosphorous scent like none I had smelled before. From out of the gloaming, an unearthly chuckle beckoned me near.

And then, in the dim circle of light cast by the dancing flame, I saw Him! A hideous shape, all white, clad in strange clothes from another time. Behind his black eyes danced an odd and evil merriment. He sat upon a throne made of human heads bearing the brown skin of the cursed children of Ham. And yet the heads lived, nodding and gaping blindly in states of agony.

Enjoying my horror, the creature opened his mouth, croaking out his declarations in an ancient tongue not heard in generations.

“I think they’re playing the race card, in my view. To say that we criticize, or that I criticize, Barack Obama or Eric Holder because of race, I just think it’s obviously not true. My view of it is the criticism is merited because of performance—or lack of performance, because of incompetence. It hasn’t got anything to do with race.”

I opened my mouth, intending to question this assertion, for what was accusing someone of “playing the race card” anything but playing the race card oneself? But the creature fixed me with a baleful gaze, and I deigned to stay quiet, to let him have his say in hopes that he would afterwards allow me to return to the land of light.

Perhaps sensing my foolish and naïve dream, the creature chuckled. His breath, redolent of the decay buried at the bottom of a swamp, enveloped me, near driving me to my knees. He chuckled again, deeper this time.

“I think his apology tour, when he went to Cairo in the summer of 2009 and said the U.S. overreacted to the events of 9/11, was a huge mistake…I think he’s done enormous damage to the military. I think what’s happened to the military in terms of morale, in terms of financing, budget and so forth is just devastating.”

I wanted to protest, to question this canard of an “apology tour” and to say that military morale had perhaps been wounded by our nation’s long, imperialistic overseas adventures that had drained our treasury and broken so many of our people. You saw them everywhere, these destroyed warriors: begging for scraps in the street, writing letters in their capacities as elected legislators to our Senate. I opened my mouth but could not speak, for something that tasted of dust writhed within. I raised a hand and discovered my tongue replaced by a mass of living, squirming worms.

As my own gorge rose in horror, one of the skulls set in the throne began emitting soul-rending shrieks. The keening echoed off the farthest enshrouded reaches of the chamber. The creature, whilst never averting his black eyes from my own, reached down and plucked the skull. He dug his long talons into the skin, peeling it free of the bone. Then he twisted off the crown of the head as one would twist open a bottle cap, and drank deeply of the contents therein.

Now I did fall to my knees as the creature continued in its sonorous, rasping voice.

“Our friends no longer trust us, and our adversaries no longer fear us. We’ve created a huge vacuum in that part of the world, and ISIS has moved in big-time. Now we have a caliphate in Syria and Iraq…There were arguments about Guantánamo, and periodically after we set up Guantánamo there would be a burning desire on the part of the State Department to close Guantánamo. And I can’t count the hours we spent in what I considered to be a totally wasted exercise.”

Blood ran down the creature’s chin as he devoured the skull’s contents. He smiled at me then, his teeth coated with gore. I opened my mouth again to scream, but could only emit a muffled keening. The creature grunted and tossed the emptied skull away. I heard it clatter against stone somewhere in the darkness. Then he reached down to pluck another.

“It’s still open today. It’s still there for a reason. You’ve still got a couple hundred really bad guys, terrorists, who you need to have someplace you can keep them. You don’t want to bring them to the United States and give them the rights and prerogatives they would have as an American citizen in a legal proceeding. If anything, we’ve let too many of them go, in terms of those who have returned to the battlefield.”

Once again, the skinning of the death’s head, the opening of its brain casing, the emptying of its contents. And still the creature seemed unsatisfied. Then he looked at me. A terrible light seemed to animate him now. He raised himself from that throne of madness and stood, this stooped and wizened thing. Deliberately, slowly, he began tottering towards me. Upright, he looked somewhat like a man. It was a man, or had been once. Now it was something else, something unnamable with claws that shrieked against the stone as it slid its pustulous feet along the floor.

I wanted to run, to flee this terror, to return to the surface world I would never see again. I thought of my family around the hearth, awaiting my return from my sojurn. Why had I left them to explore this darkness?

Now the creature stood before me.

“I can remember sitting in the Oval Office with deputy national security advisor Stephen Hadley and others—I think others were in there—where we talked about the techniques. And one of the things that was emphasized was the fact that the techniques were drawn from that set of practices we used in training our own people.”

He took my head in his claws. I felt the shudder course through me. Something warm grew below my abdomen, a foul-smelling dampness. The creature chuckled again, a deep and resonant sound, the closest I knew it could come to expressing joy.

“I think we did those things we needed to do to make certain that we were operating within the statutes and the laws. We worked hard, for example, when we got into enhanced interrogation techniques. The Central Intelligence Agency was very cautious and insistent upon not going forward until they had sign-off. And that meant an opinion from the Justice Department that what we were going to do was legal and consistent with our international obligations, and it had been authorized by the president of the United States and the senior NSC people.”

There were pinpricks of agony as talons pierced my brow and tore skin from bone. The creature peeled my face in long, precise strips. There was a flash of agony as the top of my cranium was wrenched free. He lifted my skull to his lips like a chalice of the damned. Which I suppose it was.

“And we bent over backward to adhere to the law, to not do something that was, quote, ‘torture,’ et cetera, et cetera. So I feel very good about it. I don’t spend a lot of time worrying what the critics have to say about it.”

There was a sense of the world draining as the contents of my brain case slid easily into the creature’s gaping maw. He went quiet then, except for a horrible gurgling I recognized from times of pleasure, of meals and drink consumed in a happy world now lost to me forever.

Having drunk his fill, the creature shuffled back to his throne, mumbling still more about terrors in a desert land I could not comprehend but which obviously pleased him in whatever corners of his dessicated soul still existed. He tossed my skull into the darkness, where it bounced several times and came to rest at the base of a pile of other skulls, the contents of which had long been similarly drained to sustain the life of this fearsome evil.

And here it still rests, thousands of eternities later.