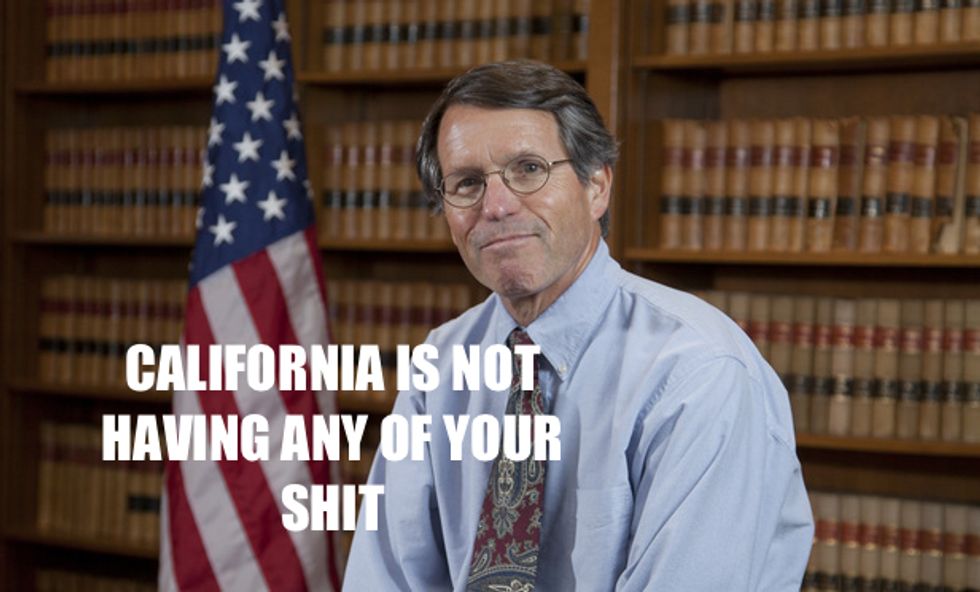 Good Morning, Wonkers! It is NiceTimes again, at least for the next 20 minutes until we have to come back and tell you that yet another of your childhood heroes is a horrible rape monster. But until then, let's enjoy this epic smackdown of Trump's Sanctuary Cities Order from the 9th Circuit.

Way back in January, when Steve Bannon was still writing all those gonzo Executive Orders, the White House burped out a presidential decree to withhold "federal funds" from "sanctuary cities." They didn't define sanctuary cities, or describe which funds were going to be withheld, but then Donald Trump helpfully went on The O'Reilly White Grievance Hour to flesh it out.

I don’t want to defund anybody. I want to give them the money they need to properly operate as a city or a state. If they’re going to have sanctuary cities, we may have to do that. Certainly that would be a weapon. […] I’m very much opposed to sanctuary cities. They breed crime. There’s a lot of problems. If we have to we’ll defund, we give tremendous amounts of money to California . . . California in many ways is out of control.

Yes, the President went on national television to announce his plan to withhold all federal dollars from the state of California to punish it for not turning over undocumented immigrants to ICE. Because he's slick like that. And because he doesn't Constitution good.

In April, Judge William Orrick issued a preliminary injunction on enforcement of the order because:

Jeff Sessions, who is no one's idea of a great legal mind, tried to save the executive order by issuing a Memorandum in May. We're definitely not doing anything illegal, he promised, so disregard our threats to withhold "any" funds and all that stuff Trump said on teevee. He was just funnin'!

Which is all very interesting, except that a Memorandum from Jeff Sessions ISN'T LAW, and an Executive Order from the president, Donald Trump, IS. As Judge Orrick put it,

Yesterday the judge granted the cities of Santa Clara and San Francisco summary judgement and permanently barred enforcement of the Order. Sessions will probably still be able to condition receipt of some law enforcement funding on compliance with ICE detainer requests, but at least the president and his goon squad will have to back off trying to dock Medicaid and education funding for cities and states that refuse to round up immigrants and turn them over to ICE for deportation. And in 2017, that's what counts as NiceTimes. We'll take it!