Kansas Invents New Name For Abortion Procedure, Then Bans It Because It Sounds Icky 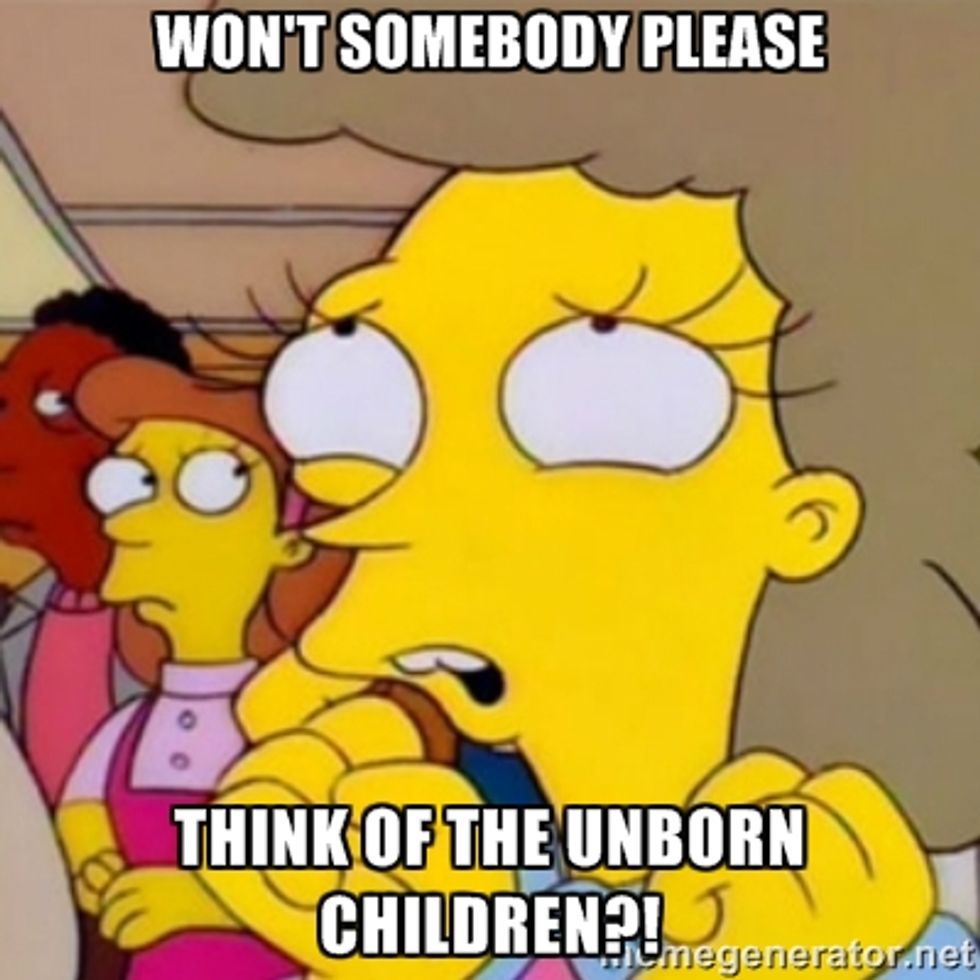 Sure, Kansas is going right down the toilet because Gov. Sam Brownback's magic tax cuts have failed to fix the state's big ol' budget hole. But that doesn't mean Gov. Blows A Lot couldn't find time this week to sign a shiny new anti-abortion bill into law. He's got priorities, you know:

Kansas became the first state Tuesday to ban a common second-trimester abortion procedure that critics describe as dismembering a fetus.

Republican Gov. Sam Brownback, a strong abortion opponent, signed a bill imposing the ban, and the new law takes effect July 1. He and the National Right to Life Committee, which drafted the measure, said they hope Kansas' example spurs other states to enact such laws. Already, the measure also has been introduced in Missouri, Oklahoma and South Carolina.

The latest One Neat Trick to ban abortion, even though the Supreme Court has said you cannot do that, is contained in a new phrase in Senate Bill 95, to make a legal medical procedure sound icky:

"Dismemberment abortion" means, with the purpose of causing the death of an unborn child, knowingly dismembering a living unborn child and extracting such unborn child one piece at a time from the uterus through the use of clamps, grasping forceps, tongs, scissors or similar instruments that, through the convergence of two rigid levers, slice, crush or grasp a portion of the unborn child’s body in order to cut or rip it off.

Here's a little-known fun fact: There is no such thing as "dismemberment abortion." The Kansas legislature, by which we mean the anti-choice activists who wrote the bill, just made it up for dramatic effect. Clever, no? People might not cringe and gag and want to save all the unborned babies at the words "dilation and evacuation" -- which is a real medical term to describe the procedure commonly used in second trimester abortions, which are, AHEM, legal -- but "dismemberment abortion" has a nice ewwww gross! ring to it. Who could possibly be in favor of dismemberment? Of BABIES?!?

This is the same tactic the National Right to Life Committee (yup, same assholes) used to get Congress to enact the Partial-Birth Abortion Ban Act in 2003. See, "intact dilation and extraction" didn't quite convey just how gross and bad and wrong abortion is, so they made up "partial-birth abortion" to make it sound real real bad. And then they instructed Congress to determine, despite reality and medical evidence to the contrary:

A moral, medical, and ethical consensus exists that the practice of performing a partial-birth abortion... is a gruesome and inhumane procedure that is never medically necessary and should be prohibited.

It worked, too, because members of Congress are generally, by definition, idiots. And while most of them are not doctors, they like to pretend they are, and they know what kind of medicine doctors should and should not practice because they saw a bumper sticker one time, which is even better than going to medical school.

Not that medical schools will teach you anything at all about abortion, if the anti-choice activists get their way -- and they usually do because, quite frankly, they're much better at the catchy slogans and heart-wrenching protest signs. North Carolina, for example, is considering HB 465, which would also ban abortion in all sorts of ways that are not constitutional, but pffft, like that matters. PLUS, it's got this swell provision in it:

No department at the medical school at East Carolina University or the University of North Carolina at Chapel Hill shall permit an employee to perform or supervise the performance of an abortion as part of the employee's official duties.

So one of the top OB-GYN residency programs in the country would be prohibited from teaching doctors specializing in health care for lady parts how to do a standard medical procedure for lady parts. That should definitely save lives -- unless a lady needs an abortion to save her life, but aw shucks, her doctor never learned how to do that. Not that it will matter, because if this Kansas strategy catches on, doctors won't be allowed to perform abortions anyway, so everyone wins, except for the women who want to terminate their pregnancies. But who cares about them? They are just baby-killing whores, even when they are going to die without this LEGAL medical procedure. Eh whatever, Congress can just decide that never happens anyway, and then it never will.