Kansas Prevents Thousands From Voting, Like Jesus Would Have Wanted 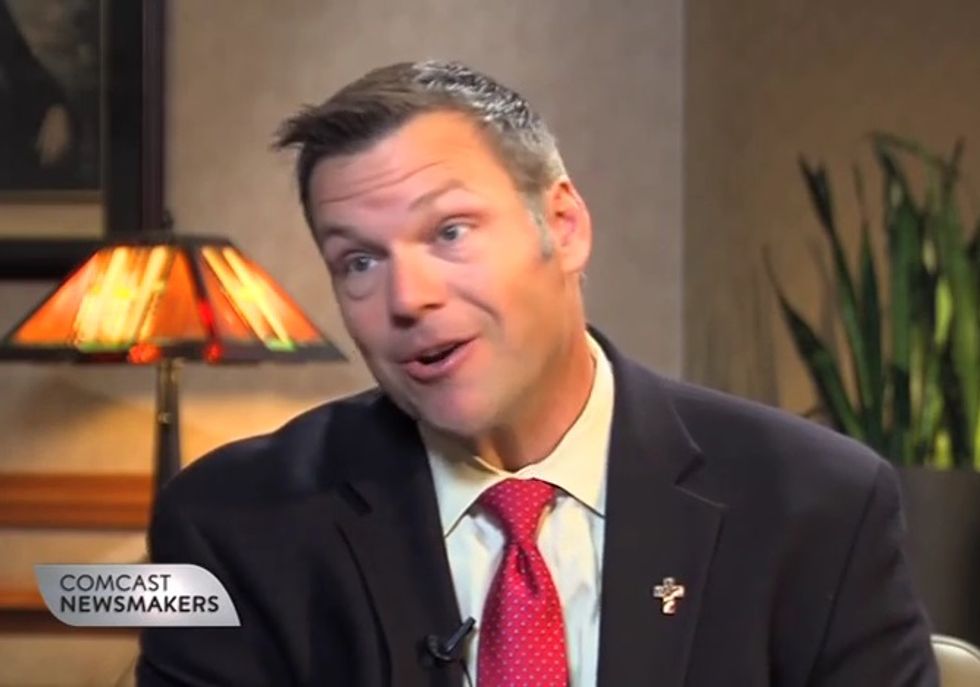 Kansas's terrible voter suppression system is in the news again, this time the focus of a Reuters report finding -- surprise, surprise! -- the state's idiotic voting law mostly keeps young people who are Democrats or unaffiliated from being able to vote. About 36,000 voters are in registration limbo thanks to the state's absurd law requiring voters to provide not only photo ID when registering to vote, but also proof they're U.S. citizens.

Consider the situation of Tad Stricker, a hotel manager who occasionally has to move from state to state for his work. When he moved to Kansas, he dutifully went to the DMV, got his new driver's license, and registered to vote. But when he went to vote in November 2014, he wasn't listed on the voter rolls. A month after the election, he finally got a letter informing him his registration was "in suspense" because he hadn't also brought documentation proving his citizenship when he registered. Apparently nobody at the DMV bothered to mention that, either. Imagine that!

Spurred by Secretary of State Kris Kobach, a national leader in pushing for anti-immigration and voting changes, more than 36,000 Kansas residents have joined Stricker in limbo since early 2013 under a state law that raises a new and higher barrier to voting in the United States: proof of citizenship.

While you must be a U.S. citizen to vote in American elections, most states allow those wishing to register to simply sign a statement affirming they are citizens and provide a driver’s license number, Social Security number, or other proof of residency.

Silly Mr. Stricker! You think registering to vote means you're registered to vote in Kansas? Don't be silly! Kris Kobach has a national reputation for fighting voter fraud to maintain, even if there isn't any, so he convinced the state legislature to pass tougher requirements for registration. Stricker was one of the plaintiffs in a recent ACLU lawsuit against Kansas's voter registration law; on May 17, U.S. District Court Judge Julie Robinson ruled Kansas must allow Stricker and thousands of other Kansans who registered under the federal "Motor Voter" law to be registered. Not that it's settled -- Kobach has appealed the decision, because he's certain the sanctity of the vote is imperiled, and because he is an insufferable asshole.

Not that Kobach is trying to suppress voting, heavens no! He just wants to make sure everyone can jump real high when he sets up some impediments to voting, which unlike gun ownership is not the sort of right just any idiot should be allowed to exercise.

The law Kobach spearheaded in Kansas requires registrants to prove their citizenship by providing one of a series of documents, including birth certificates and passports. They are placed on the suspense list if they can't.

Since late last year, those who did not complete the requirements for registration have been purged from the voter rolls after 90 days and had to begin the process over again.

About 14 percent of Kansans who tried to register between the law's onset in 2013 and late 2015 failed to meet the requirement and went on the suspense list, according to documents filed in a lawsuit challenging the requirement.

Steve Lopes, the head of the Johnson County Voting Coalition, a voter-registration group, is one of those commies who thinks everyone should have the right to vote, even if their DNA hasn't been proven 100% Republican. He told Reuters Kansas has "created a system that is needlessly complex and very discouraging, particularly for young people ... Now people just say, 'Forget it, I'm not going to vote'." We bet they say considerably stronger things, too.

This is all fair and just, says Kobach, who is absolutely certain that hordes of non-citizens are sneaking into polling places and stealing citizens' votes, despite virtually no evidence that it's happening. Of course it's happening. Don't you watch Fox News?

"Every time an alien votes, it cancels out the vote of a U.S. citizen. That's real disenfranchisement, it's happening every election and it's happening in every state," Kobach said, estimating thousands of non-citizens are on voting rolls in big states with large immigrant populations.

In her May 17 order telling Kobach to do his goddamned job and register 18,000 people to vote who are currently suspended, Judge Robinson noted evidence that Kansas had only identified three non-citizens who had voted in federal elections between 1995 and 2013. Another 14 non-citizens attempted to register to vote (it wasn't clear how many of them immediately said, "Oh, sorry, my bad!" when informed you have to be a citizen to vote). Still, that is a number bigger than zero, so maybe Kobach is right? Clearly a fan of fraud, Robinson wrote that

even if instances of non-citizens voting cause indirect voter disenfranchisement by diluting the votes of citizens, such instances pale in comparison to the number of qualified citizens who have been disenfranchised by this law.

Reuters examined a suspense list from April with nearly 17,000 voters on it, and found "more than half were ages 17 through 21, and more than 60 percent were age 25 or under."

Chart by Reuters; prize for most creative explanation for that second footnote.

Younger voters, who are more likely to register as unaffiliated or Democrats, have a harder time getting the documents needed and have less patience with what has become an unwieldy process, said Michael Smith, a professor at Emporia State University who has studied the Kansas suspense list.

Kobach wasn't worried by that, either, possibly because he is a cynical, evil man. He said it was only "natural" that younger voters had the highest suspense rate, since they're the majority of new registrants. Not that there's anything unfair about Kansas requiring a higher standard of documentation to register. Barrier to voting? Pshaw, says Kobach:

"If you define a barrier to voting as just having to do something before you vote, every state has that barrier, virtually every state requires proof of address," he said.

[wonkbar]<a href="http://wonkette.com/587521/tyrant-hillary-clinton-will-haul-all-americans-off-to-voting-camps"></a>[/wonkbar]Yep, that's why Kris Kobach is a GOP Thought Leader: hardly any difference between Kansas, with its requirement for birth certificates or passports, and Oregon, which automatically registers everyone who turns eighteen. Address, birth certificate, pretty much the same thing, right?

And even though Judge Robinson is requiring Kansas to begin registering those who signed up under the Motor Voter law come June 14, her ruling still leaves in place the stupidest part of Kansas's voting law: Tad Stricker and other Kansans who registered without proof of citizenship will still only be allowed to vote in federal elections, for president and Congress, but not in state and local elections.

But wait, it gets worse, since Robinson's ruling doesn't affect people who registered by mail or anywhere other than the DMV:

For now, that has created a chaotic two-tier system where some Kansans can vote in state elections and some cannot, some need to provide proof of citizenship and others do not, and many county election officials are uncertain how to proceed.

"It's a complete mess," said Marge Ahrens, co-president of the nonpartisan Kansas League of Women Voters.

Well, sure. But those three filthy foreigns who voted between 1995 and 2013 probably won't vote, plus thousands of possibly Democratic-leaning youngs and minorities, so everything worked out pretty well for Kansas, didn't it?