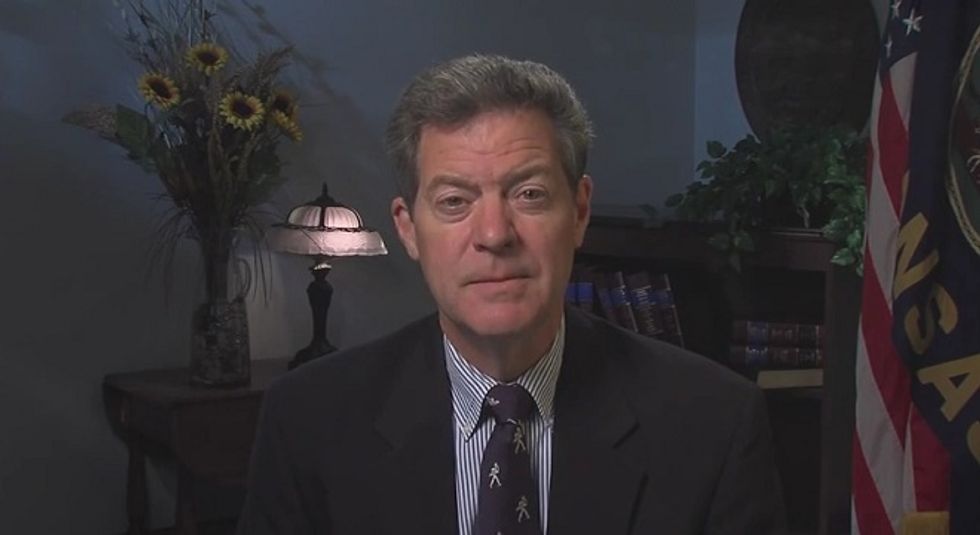 How fiscally efficient are you feeling these days, people of Kansas? Now that your education and welfare funding have been pillaged to enrich the state's upper crust, you might think you've trimmed all the fat you can, but newly re-elected Gov. Sam Brownback has faith that you can run even leaner.

Fresh, hot budget numbers show that Brownback's unprecedented tax cuts for the rich have left Kansas even worse off than its already-catastrophic financial predictions suggested, and with the governor's crack budget team hard at work finding "efficiencies" to close the gap, Kansans are bracing for a state so efficient its roads will be impassable, its poor will be starving, and its few remaining schools will be powered by students pedaling beneath their desks.

The Kansas City Star reports that Kansas had a $23 million shortfall in revenue in October alone and will need to use its entire budget reserve of $380 million and cut another $280 million on top existing cuts just to make it through the year. Brownback's budget director, Shawn Sullivan, has been working on "various budget proposals" to deal with this disastrous shortfall, which is totally not a surprise! Everything is going according to plan! Kansas just needs to be like a family and manage its money responsibly, the way any family would after voluntarily giving up a bunch of the income it needs to survive.

“The state of Kansas must continue to live within its means just as families do every day,” Sullivan told reporters Monday. “Our primary focus will be to curtail growth in state spending through additional efficiencies and policy proposals.”

Sullivan said the Brownback administration has already identified about $150 million in efficiencies to help address the revenue shortfall. Among other things, he pointed to standardizing state computer systems and lower than expected health insurance costs for state workers.

Proponents of Brownback's budget approach maintain that everything will be fine once Kansas sees the explosive growth that lower taxes on job creators will surely bring "down the road," which is Sullivan's technical budgeting term for "in Sam Brownback's imagination." We're sure the Red State Miracle that Brownback envisions will start any day now, and in the meantime Kansas can weather a few more reductions in its bond rating due to what Moody's describes as the state's "worsening structural imbalance and negative fund balances."

The downgrade reflects Kansas' relatively sluggish recovery compared with its peers, the use of non-recurring measures to balance the budget, revenue reductions (resulting from tax cuts) which have not been fully offset by recurring spending cuts, and an underfunded retirement system for which the state is not making actuarially required contributions. In recent years the state has appropriated funds from or shifted costs to the State Highway Fund to help balance the general fund budget. The phasing in of increasing income tax cuts, along with rising pension costs, will continue to exert pressure on the budget.

Those dusty old number-crunchers at Moody's and Standard & Poor's just don't get how the economy works. All you have to do is get government off everybody's case and there will be no limit to the Job Creation! Businesses don't need things like an educated workforce or transportation infrastructure, so we trust that Kansas will soon be the envy of the nation in job growth rather than a sluggish failure. They just have to get past this bumpy stretch of road first. They'll have the cash to fill those potholes in no time.