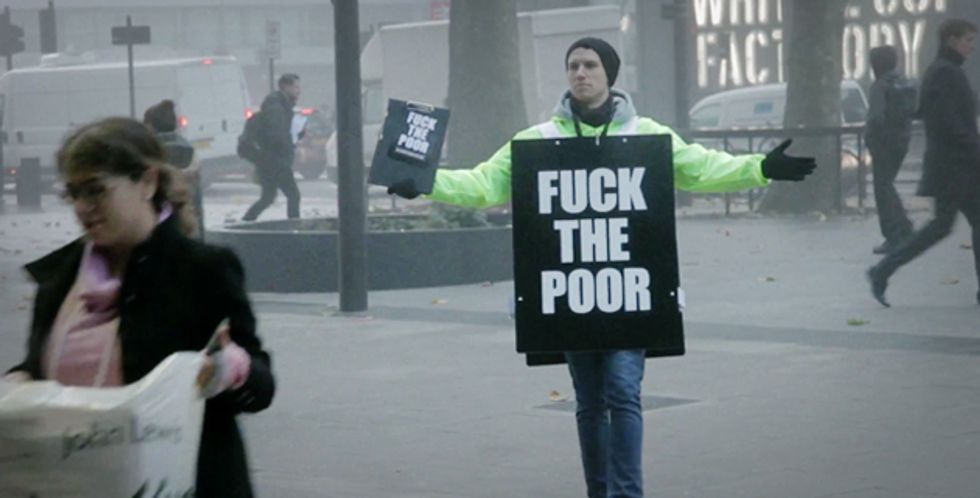 It is very tough coming up with new and creative ways to fuck the poor. A Missouri rep decided in March that he would try to do it by advancing a bill to make sure none of those gross people on SNAP benefits would be able to buy luxury items like seafood, because heaven forfend poor people (who are not actually spending money on lobster) have something healthy to eat.

Kansas has now completely one-upped its eastern neighbor, by sending Governor Sam Brownback HB 2258, which delineates a truly novel list of things welfare queens are NOT ALLOWED to spend their money on, like cruise ships for instance! That's right, Kansas poors, you do NOT get to take the literally hundreds of dollars per month -- $429 if you're a family of three! -- the government provides for people on temporary assistance and just fritter it away on Caribbean vacations. Also banned are booze, cigarettes, concerts, sportsball games, clubs where ladies or gentleman get nekkid, and a whole list of other places.

Another fun place that will be off limits is "fortune tellers." Apparently, in Kansas, those on welfare tend to get their checks and immediately use their Obamaphones to make an appointment with Madame Endora, to find out when they're going to meet Mr. Right. We are glad Kansas legislators are dealing with this problem.

One of the bill's main proponents, a certain state senator Michael O'Donnell (R-Duh) of Wichita, says this is just to make sure that the poors are Living Their Best Lives:

Sen. Michael O’Donnell, a Wichita Republican who led advocacy for House Bill 2258, said the bill was designed to compel people to spend public assistance “more responsibly” and to shape the state’s support system in ways that moved individuals into jobs, providing each with dignity.

“We’re trying to make sure those benefits are used the way they were intended,” O’Donnell said. “This is about prosperity. This is about having a great life.”

Republicans, always fighting the good fight to improve quality of life for impoverished folks. Be still our bleeding liberal hearts! O'Donnell is also very offended and upset by the mean people who have suggested that maybe Republicans have a real hard-on for fucking the poor, saying that he is "sad that words like diabolical, spite, evil, malicious, elitist have been brought up." He adds, "that hurts." Awww, poor baby.

But wait, there is more! So, on top of having a list of banned places and items, the bill also includes a new provision that says that welfare recipients cannot withdraw any more than $25 per day from the ATM, because, god forbid they might want to pay rent or something. (Ha ha, like they do that anyway, this is so they don't go binge-palm-reading on the Carnival cruise ship, duh.) This fact sent Wonkette Good Times Friend John Cole on a righteous rant about how, among other things, this fucks with the poor people's ability to go to normal grocery stores and buy stuff in bulk, which saves money, and instead forces them to keep eking out an existence buying overpriced, unhealthy shit at convenience stores. Oh, and since many of these people don't have bank accounts, after each person has done one $25 withdrawal from the ATM, each one after that will come with an 85 cent service fee. We must take a moment to pat Kansas Republicans on the back for figuring out a new way to enrich banks at the poors' expense, because that is truly inspired!

Republicans like O'Donnell are laboring under the delusion that their fuck the poor policies HAVE TOO helped people, pointing out that there are fewer on the welfare rolls these days in Kansas, which must mean their policies are working! Mean Democrats, on the other hand, point out that Kansas Republicans have been passing all kinds of regulations limiting who can and cannot get public assistance, asserting that, uh, maybe when you kick all kinds of people out of the eligibility pool, the numbers go down, duh.

Well done, Kansas, you are officially the King of America's Fuck The Poors competition, at least until one of the other dickhead states steps in and knocks the tiara off your dingbat head.